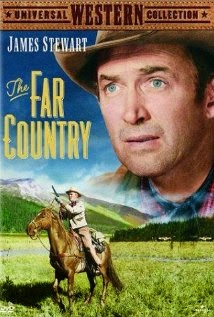 James Stewart and director Anthony Mann made several westerns together, and this one is unusual for being not all that great. The location photography in the snowy mountains of Alberta is impressive, but the casting seems often wrong, and credibility gets a painful stretch if you know much about geography and the Klondike gold rush.

Plot. The film opens in Seattle in 1896, where Stewart arrives with a herd of cattle he has driven from Wyoming to deliver by steamer to Skagway, Alaska. There, he and his sidekick (Walter Brennan) plan to take them over a difficult trail to Dawson in the Yukon. They expect the cattle to sell for enough money to buy them a ranch in Utah.

The whole journey is fraught with difficulties and obstacles. On the way from Wyoming, Stewart has already shot two drovers who attempted to make off with some of his herd. For that he’s wanted for murder and is hidden aboard the departing steamer by a Skagway saloonkeeper (Ruth Roman).

In Skagway, his herd disrupts a public hanging, and he’s brought up before a crooked judge (John McIntire, in a role that may have been modeled after Soapy Smith) for disturbing the peace. The fine is his herd of cattle, which Stewart and Brennan steal back under cover of darkness and spirit across the border into Canada. But there’s more trouble before reaching Dawson, as the two men are witness to the robbing and killing of miners returning from the gold fields.

Roman relocates in Dawson to open another saloon, and McIntire follows her there, along with his gang (Jack Elam, Robert J. Wilke). Both Roman and an Austrian ingénue (Corinne Calvet) take a romantic interest in Stewart. He is polite to each but not one to complicate his life with a woman.

Stewart and Brennan try their hand at placer mining and accumulate enough gold to buy that ranch in Utah. Attempting to avoid arrest in Skagway, they take another route out of the Yukon. But they are ambushed as they start to raft down a river to Juneau. Brennan is killed and Stewart is disabled.

Untrusting of people, Stewart has outspokenly resisted every opportunity so far to care about the welfare of others. Calvet is a habitual helper and can’t understand his kind of thinking. Roman sees his worth to her as a business partner and, incidentally, a bedmate. After he is nursed back to health by Calvet, Roman takes over, trying again to turn up the heat between them.

Witness to the deterioration of public order in Dawson, Stewart stands by with his healing arm in a sling as McIntire and his men brazenly jump miners’ claims. Finally Stewart has had enough and, limbering up his stiff fingers, straps on his gun belt. A shootout in the muddy streets of Dawson leaves the villains and Roman dead, and the townspeople gather around Stewart, grateful for his eliminating the bad element that has taken over the town.

Characters. Take away the snow-swept Canadian mountains, and there’s not much left of interest in this north-western. Hitchcock could find a dark side in Stewart, but his character’s supposed lack of heart requires a suspension of disbelief that doesn’t work easily in this film. Similarly, McIntire’s performance lacks an underlying layer of menace to make him believably villainous.

Brennan plays his patented onscreen persona—the gimpy, whiskery old-timer with the squeaky, gravelly voice. It’s a caricature, but it’s Brennan’s caricature, and you grant him what he does with it. Alas, when he dies, a nearly lifeless movie grows even more so.

Roman in her low-cut, brightly colored gowns portrays a woman used to getting what she wants from a man, with a little flattery and a steamy kiss. She may even love Stewart a little. But Stewart is no easy mark. There’s a playfulness in their first scene together, as she hides him in her stateroom bed and climbs in after him. But further scenes between them are emotionally cold. A spark or two would add some interesting complexity without sacrificing Stewart’s sexual aloofness. But no.

Hard to say what audiences made of Corinne Calvet at the time. Playing a girl half her age, she chirps her lines in a way that grates on the ears. Thankfully, a trio of older women (Connie Gilchrist, Kathleen Freeman, Connie Van) offers some welcome comic relief as they sing for customers at their restaurant in Dawson. Character actor Jay C. Flippen shows up in a secondary role, as does Harry Morgan.

Wrapping up. The film was shot in an early not-so-widescreen format, 1.75 : 1, used briefly in the mid-fifties by MGM and Warner Bros. With its location photography, it attempts to capture the look and feel of the far north gold fields. There are striking moments, as when we’re shown a distant avalanche down the sheer face of a mountainside.

Writer Borden Chase provides a couple of interesting details that derive apparently from some research. Calvet gets the sawdust concession at a saloon in Skagway allowing her to sift each night’s sweepings for gold dust. A well-placed nudge here and there among the customers adds to her take.

Chase was a prolific writer, publishing novels as well as short fiction in the magazines. As a screenwriter, he penned numerous westerns, including Red River (1948), Winchester ’73 (1950), Bend of the River (1952) and Vera Cruz (1954). A bio of his career can be found here and a list of his publications in the slicks and pulps here.

The Far Country is currently available at netflix, amazon, and Barnes&Noble. For more of Tuesday’s Overlooked Movies and TV, jog on over to Todd Mason’s blog, Sweet Freedom.
Tweet

Further reading:
BITS reviews of other James Stewart-Anthony Mann westerns:
Bend of the River (1952)
The Naked Spur (1953)
The Man From Laramie (1955)