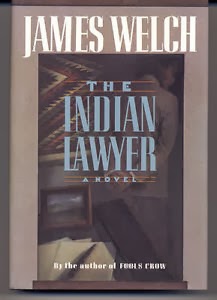 First published in 1990, this is a thoughtful and suspenseful novel by a Native American writer from Montana. I had previously read his Winter in the Blood (1974) and The Death of Jim Loney (1979). All three novels concern the complexities of living as an Indian in a white-dominated world.

Unlike the struggling social cast-offs in the earlier novels, the protagonist of The Indian Lawyer has by all appearances successfully assimilated to white culture. Sylvester Yellow Calf has parlayed statewide recognition on the high school basketball court into a university education and law school. He is now one of the rising members of a high-end law firm in Helena.

With influential friends, he may well rise further from his humble origins on the Blackfeet reservation, where he was abandoned by parents and raised by a grandmother. Early in the novel he is approached by a member of the Democratic national committee to run for Congress.

His pleased but almost diffident response to that offer signals something not quite substantial in the identity he has assumed as a promising young lawyer. Beneath his confident surface is an uncertainty that the reader suspects and that he is mostly unaware of. The break from his reservation past has left him without either real roots or clear ambitions. Despite his achievements, he remains an outsider.

Single, he has known a good many women in his short life, and his current girlfriend is the daughter of a rancher and former Senator. While she is ready for a deepening relationship with Sylvester, he remains tentative, conscious of the disapproving glances of whites when the two are out together in public.

He lets her slip away, as he has done earlier with a high school counselor he was once fond of. Sliding into what seems to be an old groove, he violates all professional standards by allowing himself to be sexually intimate with a new client. It may be an old groove for him, but it’s also thin ice.


The woman, Patti Ann, is actually already married—and to a man in prison, where Sylvester serves as a member of the parole board. When he finally learns of this, it is already too late to make a clean break. A pair of nasty ex-cons is out to blackmail him. A degree of dread, only hinted in the opening chapters, gradually grows as the couple is stalked without their knowledge and the potential for violence mounts.

The sex in the novel is explicit, but the style of storytelling is almost polite, similar to mid-century novels, and even harks back to Theodore Dreiser. The young man awkwardly crossing social boundaries and taking dangerous risks recalls An American Tragedy. Meanwhile, a parallel plot follows Patti Ann’s husband, Jack, as he does time in prison, where he is also at risk, being targeted ironically by Indian prisoners.

The Indian Lawyer is currently available at amazon, Barnes&Noble, Powell’s Books, and AbeBooks. For more of Friday’s Forgotten Books, click on over to Patti Abbot’s blog.
Tweet

Further reading:
BITS review of Winter in the Blood