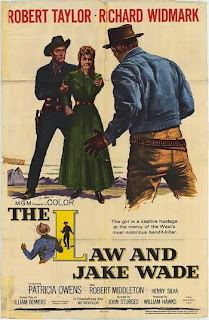 This noir western from director John Sturges is smaller scale than his big films (Gunfight at the OK Corral, The Magnificent Seven), but a quietly intense gem. Richard Widmark leads the cast in a role that recalls the grinning malice of the hoodlum he plays in Kiss of Death (1947). Robert Taylor, dressed in black, is the handsome marshal who was once his partner in crime.

Plot. Taylor, in an act of good will, leaves his post in another town to spring Widmark from jail. He expects enough gratitude to let bygones become bygones. But Widmark isn’t easily appeased for what he considers as Taylor’s betrayal when he “ran off” after their last bank job, taking the loot with him.

It is buried now somewhere in the desert, and Widmark isn’t about to let matters rest. He wants the money. He and his gang take Taylor and his girlfriend (Patricia Owens) hostage across mountain and valley to retrieve it. Once that is accomplished, it’s not clear whether he intends to let either of his captives live.

Taylor and Owens manage to make an escape, plummeting down a dusty slope and making off on foot along a ravine, but Widmark soon intercepts them. Then their progress is interrupted when they are stopped by a small company of cavalry, whose lieutenant warns them of a band of renegade Comanches roaming the hills.

Undaunted, they continue to their destination, which turns out to be a ghost town, where Taylor has buried the money in the cemetery. With the end game in sight, matters take an ominous turn as the Comanches wage a night attack that has them all fighting for their lives. Morning light brings burial of the dead and there’s a final resolution to be reached between Widmark and Taylor.

Highlights. I’m calling this a noir western because many scenes take place at night. Most of the characters are outlaws, each with his own sinisterly dark persona. Particularly menacing is Henry Silva with the occasional leering comment directed at Owens. There’s a hard-boiled edge to the dialogue, as when Middleton is asked whether any words were said over the graves of the men he just buried. “Yeah, goodbye,” he says.

The performances are fine with Widmark and Taylor well matched as adversaries. The supporting cast is also strong. Besides Owens, who easily holds her own in the company of desperadoes, there is the wonderful character actor, Robert Middleton, as a man with torn loyalties. Shot in Death Valley and the Alabama Hills of Lone Pine, California, the film is a Cinemascope travelogue capturing the scenic beauty of the Sierras under winter snows.

While much of the movie is the classic story of a wilderness trek by several desperate men and a woman, there are turns of plot that surprise and create unexpected suspense. At one point a man produces a long-unused pistol and holds another at gunpoint, neither of them knowing whether the gun will fire.

Another is the final scene between Widmark and Taylor, a classic gun duel, preceded by their stalking of one another through deserted streets and buildings. Here credit goes to Sturges and the film’s editor, Ferris Webster. During this sequence, Widmark is given most of the screen time while Taylor’s whereabouts and movement are only hinted. For added effect, the scene is played out in silence without a music track.

The relationship between Widmark and Taylor is nicely nuanced, with curious suggestions of subtext. Widmark is given to lighting cigarettes for Taylor. It’s a courtesy with a subtle element of intimacy in a man who seems otherwise to lack sentiment. You wonder about his real motivation for tormenting his old partner.

Here is the rousing trailer:

Caveats. Authenticity leaves something to be desired. The men wear modern cowboy hats, and the costuming looks like off-the-rack Penneys, including Widmark’s denim jacket. But that aside, the one real drawback of the film is the Indian raid, which seems informed only by decades of Hollywood B-westerns.

For one thing, unless we are to believe that the Sierras are some other mountains, the Comanches are ranging awfully far from their home territory. For another, Indians had to be smarter than this, allowing themselves to be picked off while running a gauntlet of gunfire. Still, the sequence is exciting enough, with a thinning of the ranks of the outlaws and some close calls for the central characters.

Wrapping up. Screenwriter William Bowers’ career spanned the 1940s and 1950s, with screenplays for westerns (The Gunfighter, The Sheepman) and crime drama (The Web, Larceny). His script for The Law and Jake Wade was based on a novel by Marvin H. Albert (currently available at AbeBooks). Two of Albert’s other novels were also adapted to westerns, Bullet For a Bad Man (1964) and Duel at Diablo (1966).

The Law and Jake Wade is currently available at netflix, amazon, and Barnes&Noble. For more of Tuesday’s Overlooked Movies and TV, jump on over to Todd Mason’s blog, Sweet Freedom.
Tweet