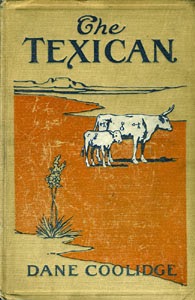 This early cowboy western is a rollicking political satire, the likes of which a reader would find difficult to duplicate in a western novel today. The Texican of the title is a freelance cattle rustler, Pecos Dalhart, who fetches up in Arizona, where he gets involved in a feud between two rival cattlemen, Ike Crittendon and John Upton.

Plot and character. Crittendon hires Pecos to alter the brands on any of Upton’s cattle he finds on the range. Meanwhile, the local sheriff, Boone Morgan, is alert to any signs of cattle theft, and when Crittendon falsely accuses Pecos of stealing a cow, he gets hauled in to the county jail, to await trial.

Pecos, as Dane Coolidge describes him, was “born a Democrat and taught to love whiskey and hate Mexicans.” However, he has begun reading an anti-capitalist newspaper, The Voice of Reason, which has opened his eyes to the corrupt law enforcement system used by the rich to oppress the poor. Sheriff Morgan soon learns he has incarcerated an outspoken advocate of revolution.

Cracking heads, Pecos immediately overturns Morgan’s use of a prisoner-run kangaroo court for maintaining order in the jail. Joined by a friend and fellow revolutionary, Angevine “Babe” Thorne (jailed for drunk and disorderly), and winning the respect and protection of the Mexican prisoners, Pecos takes charge behind bars. He is soon getting preferred treatment from Hung Wo, provider of the jail’s meal service.


A crisis quickly looms with the rising stench of undisposed waste in the cells, now that the Mexicans, observing their new status as equals, have stopped cleaning up after the white inmates. Pecos orders them all to do their own clean up but is discouraged by their defiant attitude. His dedication to revolution and his commitment to fight “the crime of government” are put to the test by “the low and churlish spirit of the masses.” Soon he is cracking heads again and holding kangaroo courts of his own.

At first rightly distrustful of the press, as a willing mouthpiece for the powers that be, Pecos finds a local reporter happy to compromise his loyalties to gain the ear of the public with a good story. Before long, Pecos is managing his own public image in the newspaper.

When his own trial date finally approaches, Pecos enlists Thorne, a fiery orator, to defend him against the county’s district attorney, Shepherd Kilkenny, who has a long record of convictions, largely through cunning and intimidating plea bargains. Pecos doesn’t yield, however. And by allowing the jury to be stacked with cattlemen, Thorne adroitly persuades them that acquittal is in their own best interest.

It also helps that a witness comes forward with evidence that the cow alleged by Crittendon to be stolen from him belonged in fact to Pecos. Crittendon’s sworn testimony is thus revealed as perjury, and he is packed off to jail, where Pecos encourages the inmates to give the man what he deserves for his treachery.

Romance. Marcelina, the daughter of one of Crittendon’s Mexican employees, catches the eye of Pecos early on, and he courts her with gifts from a mail order catalog. Her heart totally stolen away by the handsome young cowboy, she remains true to him, even as her protective mother sends her off to a convent school. Knowing him to be innocent of cattle theft, Marcelina is the one who testifies in his defense at his trial.

A free man again, and given proceeds in the amount of $1,000 for sale of his herd of cattle taken in payment for unpaid taxes, Pecos is able to offer marriage with her parents’ consent. No longer a broke drifting cowboy, someone tells him, there’s nothing to keep him from becoming a capitalist cowman.

Maynard Dixon. A great treat for readers of westerns and frontier fiction from the turn of the last century is the contribution of many first-rate illustrators. One of these was San Francisco artist Maynard Dixon (1875-1946), whose illustrations typically heighten the drama at key points of the text. I have included as many of his from The Texican as I can crowd onto this page.

Wrapping up. The Texican was Coolidge’s second published novel, the first being Hidden Water (1910) an account of a peaceable cowman up against a couple of villainous sheep men. Very different in tone, The Texican is marked by humor and irony, especially in its portrayal of political theory vs. reality. It was a time of economic disparity, when socialist thought and Theodore Roosevelt-style progressivism found adherents among western writers. With The Texican, Coolidge participates in that public discourse, but largely with tongue in cheek.

Hidden Water and The Texican were the first of over 50 western novels by Dane Coolidge (1873-1940). Over three decades he also published countless short stories, appearing in Street & Smith’s The Popular Magazine, Western Story Magazine, and many others.

The Texican is currently available at google books and for kindle and the nook. For more of Friday’s Forgotten Books, click on over to Patti Abbott’s blog.