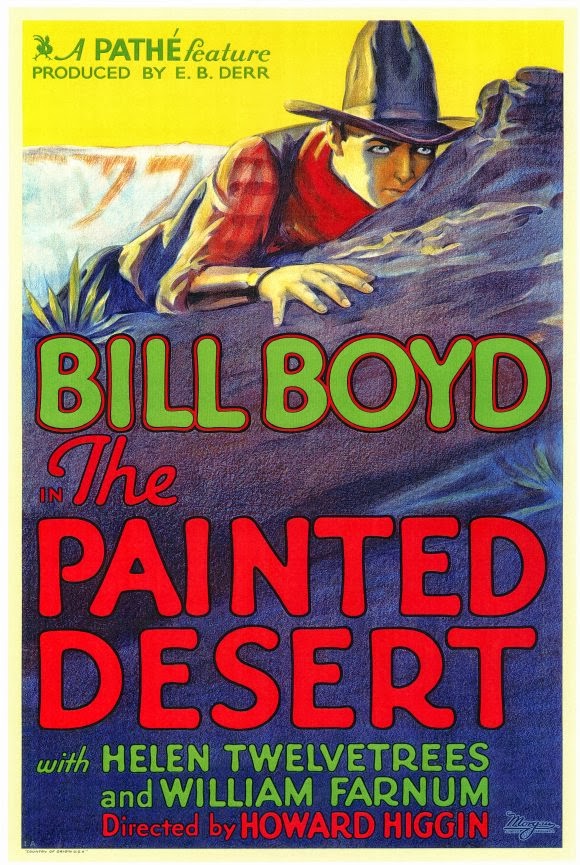 This early sound western is something of a novelty. Shot on location in scenic locations in Arizona, it shows a visual sensibility from the Silent Era, while featuring the onscreen talents of two actors we don’t associate with each other today—William “Bill” Boyd before fame found him as Hopalong Cassidy, and Clark Gable, before fame found him, period.

Plot. Boyd is the grown foster son of a cattleman (William Farnum), and yearns to see Farnum reconciled with a former partner (J. Farrell MacDonald), both of whom found him as a toddler in the desert. In a complicated plot, Boyd discovers tungsten ore on MacDonald’s land and tries unsuccessfully to get the two men to partner again in what promises to be a lucrative mining project. But a couple of decades of ill will have kept the two men enemies. Boyd then approaches MacDonald with a mining deal of his own, and soon they are in business together.

Boyd also has eyes on MacDonald’s pretty rifle-toting daughter (Helen Twelvetrees). This does not go down well with a new employee (Clark Gable), a ranch hand who hires on in the middle of escalated hostilities between the two former partners over access to water. He sabotages the mining operation and interferes with time-sensitive delivery of ore in repayment of bank loans.

Boyd gets a promise of marriage from Twelvetrees, but her father blames him for Gable’s dirty work. Boyd forces Gable in the presence of witnesses to confess his wrongdoings before being turned over to the law. Then Boyd gets caught in the crossfire between Farnum and MacDonald who have gone gunning for each other. Fortunately they are bad shots, and Boyd survives to see the two men reconciled, as bride-to-be Twelvetrees snuggles up to him in the last frames of the last shot.

Boyd and Gable. Boyd is his recognizable self, the friendly, well-intentioned man who would become Hopalong Cassidy. He’s already showing the beginnings of girth and isn’t sure yet how to be comfortable in front of the camera. Gable, in one of his first credited roles, is hardly recognizable, only his dimples and a youthful version of his trademark voice giving him away. Cast as a villain, he comes across as three-dimensional, without the usual stereotypical flourishes of villainy normally found in early westerns.

It’s interesting that the two actors are cast almost as equals in narrative weight. In the final confrontation between them, which takes place in a saloon, there is no big fistfight or shooting. Gable tries to draw on Boyd, but Boyd knocks away his gun hand and then puts him on the floor with a single punch. Clean and to the point. No showing off.

What to look for. The black-and-white cinematography is often dramatic. A mule train is photographed from a low angle, as stormy clouds fill the sky overhead. Then a distant rider is observed in silhouette mysteriously following along a ridgeline. Scenes of men on horseback are played out against badland rock formations, and we see shots of buttes and desert wastes, with cattle stampeding in clouds of dust.

There is humor in the film, as a whiskery prospector (Charles Sellen) stammers through the telling of a story and later is too drunk to hold a coherent conversation with a sullen Gable. Though firearms are brandished now and again, there are few gunshots and shootings.

Sound technology is often primitive, especially in the early scenes—exteriors that sound like they were later dubbed. The pace of dialogue is deliberately slow, filled with pauses, as if to assure audibility by microphones. One has to remember that talking pictures were in their infancy, and mastery of recording naturalistic dialogue was still years away.

Wrapping up. This 76-minute film is instructive and at times entertaining as an example of an early western movie. It bears comparison with the Gary Cooper The Virginian (1929), as each contributed to the transition to sound and the impact that the new technology had on the development of the B-western. Director Howard Higgin and writer Tom Buckingham had numerous writing and directing credits in the 1920s and 30s.

The Painted Desert is currently available online at Internet Archive and amazon instant video, and on DVD at amazon and Barnes&Noble. For more Overlooked movies and TV, click over to Todd Mason’s blog, Sweet Freedom.
Tweet