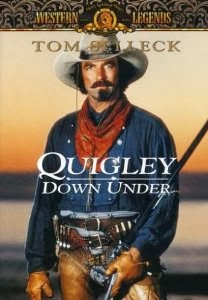 First of all, this is a movie about a long-range rifle. Almost incidentally, it is carried through most of the film by Tom Selleck. The weapon is a Shiloh Sharps 1874 Long Range, and Selleck, as the title character, Quigley, is an incredible marksman with it. Much of the excitement of the film is watching him take aim at someone else little more than a speck on the screen and seeing them blown away.

Second, it’s a movie about a hat. Selleck sports a 10-gallon cowboy hat that would not be seen again until the days of Tom Mix. As his fortunes wax and wane in the movie, he loses the hat and regains it. In the final scene it reappears by movie magic between one shot and the next.

Plot. The plot of the movie is structured in such a way that the gun is used in the service of exterminating villains. They are villains because they’re attempting to exterminate the indigenous bands of aboriginals populating the vast reaches of a sheep herding station in western Australia. Owner of the station is a man in black, played to perfection by Alan Rickman.

Selleck is an American answering Rickman’s want ad for a sharpshooter. Arriving on the same ship in Fremantle are several white slaves bound for Rickman’s station. One of them is a woman (Laura San Giacomo) more than a little addled by grief at the loss of her husband. The two pair up, get left for dead in the outback, recover with the help of a band of aborigines, and then are witness to an attempt to cruelly slaughter them, men, women, and children.

Rescuing a baby after the attack, San Giacomo is left in a cave with two days’ supply of water and a pistol to defend herself against predators. Selleck rides for supplies and narrowly escapes a fire that burns down a hotel. Then he attempts single-handedly to put an end to Rickman and his men, which ends in a three-against-one gun duel. Selleck and San Giacomo are reunited as they await transport by ship back to the States.

Dances with dingoes. Australian Simon Wincer (Lonesome Dove) directed this handsome movie, and in its mood and scale it resembles another film from the same year, Dances With Wolves. Both are long movies and fill the screen with panoramic vistas under big skies. You can get a sense of all that in the trailer:

There is a rollicking, farcical turn to much of the film, which can be measured by the music score heard in the trailer. The violence also leans toward comical exaggeration. More seriously, both films concern the genocidal treatment of indigenous populations.

Like the Sioux in Dances With Wolves, the aboriginals in Quigley are portrayed as nice folks, a little primitive, but decent and friendly. Like Kevin Costner’s Lt. Dunbar, the two Americans are liberal minded about race, in a way that wouldn’t be the norm back home for another century. One difference between the films is the portrayal of the military. The cavalry on the western plains is a menacing presence, while Her Majesty’s troops, who make the occasional appearance, are commanded by a clownish buffoon.

Wrapping up. The film was shot entirely in Australia, at Alice Springs and in Victoria. Despite any message the film might have, it is above all meant as entertainment, and definitely for Tom Selleck fans. He plays his usual wryly-comic masculine persona, who seems saddened only by the fact that other men aren’t as smart as he is. His co-star, San Giacomo, is both broadly comic and earnest. The two are an even match. Alan Rickman fans will also enjoy his portrayal of a coolly menacing villain.

Quigley Down Under is currently available at netflix (where it is streamable), amazon, and Barnes&Noble. For more of Tuesday’s Overlooked Movies and TV, hop on over to Todd Mason’s blog, Sweet Freedom.
Tweet

Further reading:
Full analysis of all weapons used in the film