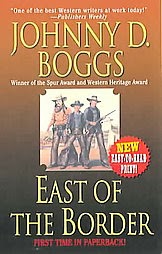 Imagine the Three Stooges on tour in a play about themselves, and you’ll get a hint of this antic novel about Buffalo Bill Cody, Wild Bill Hickok, and Texas Jack Omohundro. It’s the 1873-74 theatrical season, and while the country’s economy dissolves into another panic, Cody’s troupe of actors turn away eager crowds everywhere east of the Mississippi.

They present two plays, Scouts of the Plains and Buffalo Bill! King of the Border Men. Best described as lunatic melodramas, they feature the killing of large numbers of Indians and dances performed by the Italian entertainer, Guiseppina Morlacchi.

Plot. Boggs’ novel follows Cody’s acting company as their tour has been documented in memoirs and newspapers of the time. Where there is a thread of plot, it concerns Buffalo Bill’s mostly unsuccessful attempts to manage the behavioral excesses of Wild Bill, who lives up to his name. Each undyingly loyal to the other as lifetime “pards,” they are rarely an easy match of temperaments.

Cody is the enterprising showman, missing the freedom of his youth as a scout, but married with kids. Hickok, the older of the two men, is sliding into an alcoholic haze, darkly given to brawling, whores, and other forms of mischief. Cody keeps him in the show long after everyone else has begged him to fire the man.

Meanwhile, Hickok would welcome release from the promise he’s made to stick with the tour for a year. The clownish fakery of the playacting gets riotous applause but galls the man who survived the perils of life on the border. The displays of Indian killing are cheap farce and demeaning. Making this point during a backstage dispute, he pulls off his costume to show the scars of a gash from an actual Indian’s lance.

A subplot concerns the ongoing marital discord between Cody and his wife Louisa. He is true to her as the mother of his children—in his way. She distrusts him, often on the verge of volcanic fury, showing up during the tour to accuse him of consorting with one of his actresses. Hickok, playing a joke on his old friend, has tipped her off.

Cody is already overtaxed by the constant demands of managing his fractious company while busy meeting and greeting the public. Keeping Louisa happy nearly undoes him. In a desperate move, he gets her to come onstage during a performance. Instead of being pleased by the warm reception of the audience, she is deeply embarrassed and determines to go back to Nebraska, taking the kids.

But this crisis, too, passes. While real-life Cody and his wife seem never to have been reconciled, Boggs gives their part of the story a happy ending that is surely a stretch of his own imagination.

Character. Pivotal between Cody and Hickok is the good-natured ballast provided by Omohundro. Happily married to the danseuse Guiseppina, Texas Jack is sensible and levelheaded. A onetime schoolteacher and bar tender, he helps keep the peace offstage and remembers his lines while onstage.

But it is Hickok who really walks away with the novel, which is divided into three sections, each narrated by one of the three men. Wild Bill is a haunted man, his drinking and whoring and the barroom fights he invites are an extension of a high-risk life once lived in the West. But one senses in them a self-destructive undercurrent. The novel traces it in part to Hickok’s accidental killing of a deputy during a shootout in Abilene.

Boggs also suggests in him a lost innocence, as when he discovers he’s spent a night with a woman whose son has been forced to sleep outdoors in the cold. He buys the boy breakfast and gives him all his money in a failed attempt to win the boy’s gratitude and overcome his own guilt. Then there’s the Christmas he remembers as the best he ever had, walking the Schuylkill River in Philadelphia with a 13-year-old boy and honing their skill at gigging frogs.

There are hints that he is losing his vision and his health. His barroom brawls are outlets for his rage and proof that he cannot be beaten, even by a bunch of oilfield roustabouts. Through it all, there is the shadow cast by another fatal shooting, in Deadwood, less than three brief years in the future.

Wrapping up. There are laugh out loud moments in this novel, and it would surely misrepresent its subject if there weren’t. It captures the lives of three celebrity frontiersmen in that brief window of time when the Old West was already morphing into myth. Like fish out of water, they comically adapt to the public appetite for vicarious adventure. Even Harriet Beecher Stowe cancels an appearance to attend one of their performances.

Boggs has great fun with this material. Each of the men narrates the story in his own distinctive voice. Cody’s is brightly good-humored, apologetically self-indulgent, especially as he confesses his lapses in marital fidelity. But he won’t cuss. Meanwhile, Hickok is outrageously blunt and the most darkly funny.

In his Author’s Note at the end, Boggs claims to have taken few liberties with historical records, though sorting factual from bogus in them is no easy task. The book offers evidence of the character of contemporary newspaper accounts by introducing each chapter with a quote, such as this one from the Erie, Pennsylvania Morning Dispatch:

The drama has scarce the shadow of a plot and is like an animated dime novel with the Indian-killing multiplied by ten, but for all that it was heartily enjoyed, and the bloodier the tragedy the broader was the comedy.

Boggs also provides a long list of sources for any who wish to pursue the subject further.

First published in 2004, East of the Border is currently available in paper and kindle formats at amazon, Barnes&Noble, Powell's Books, and AbeBooks.