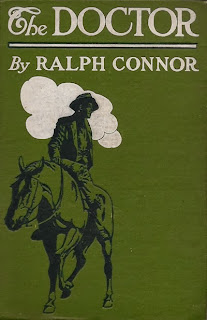 This novel by Canadian Ralph Connor was a top-10 bestseller in the U.S. when it was published. Set partly in Ontario and partly in British Columbia, it’s an inspirational story of sacrifice and suffering that would strike most readers today as profoundly sentimental.

The doctor of the title, Barney Boyle, is a man from a country village who overcomes the disadvantages of rural poverty to become a world-traveling doctor. Tirelessly serving others, he at last exhausts himself and falls ill while treating the miners and railway workers on the Canadian frontier.

Plot. At the center of the novel are three more characters: Boyle’s brother, Dick; a childhood friend, Margaret Robertson; and a schoolmistress from the American South, Iola Lane. It is a foursome fraught with unrequited affection. Margaret loves Barney, Dick loves Margaret, Barney loves Iola, and Iola wants a high-profile singing career.

Years pass as each finds a place for themselves in the world, winning the adulation of others. While Barney becomes a skilled doctor championing the introduction of proper health care for workingmen, Dick achieves fame as a frontier missionary and social reformer. Margaret becomes matron of a charity hospital, and Iola a world-famous opera diva.

The two brothers vow undying love for each other as young men. Barney has yielded without complaint to their mother’s wish that Dick should be the one to get an education. But as Barney struggles against adversity to become a doctor, he discovers that Dick and Iola have become improperly friendly. This severs the bond between the two men until they meet again by chance in the wilds of British Columbia and are reconciled.

Romance. Connor’s characters are possessed by feelings of romantic attachment, while each is doomed to be unloved in return. The energies they might throw into passionate enjoyment of eros are diverted instead to their careers. And Connor would have us believe that this is God’s plan for them.

At the heart of the novel is a belief that God uses the suffering of unrequited love to bring these four to a deeper faith and a higher spirituality. When the heart starves for affection, it surrenders of necessity to the love that passeth all understanding. To add a merciless twist to this argument, Connor has two of the characters die just as they are joyfully reunited after many years of painful separation.

Characters. Connor’s characters are believable, and though they seem dated, their heads are full of notions that are basically well meaning and good hearted. They are forgiving and subscribe, one could say religiously, to a belief in not judging others (Matthew 7:1). I suspect they are not much different from the evangelists who show up at your door with devotional tracts.

Chiefly Scots, Irish, and English, they exhibit a “British” politeness about ordinary differences among people. There is little insistence on puritanical rigor in one’s theology, except when a member of a divinity school examination board finds Dick’s admission of doubt to be “heretical.” Connor seems to say that unsettled religious belief may actually have a place in the unsettled West. There, faith takes the form of building and staffing hospitals and firm but gentle pressure to remove social ills like saloons and red light districts.

One finds no villains in the novel, just misdirected men ready to change their ways. A gambler called Mexico shows up at a church gathering to mock the preacher and has a conversion experience instead. A superintendent of the railroad easily understands the logic of Barney’s appeal for healthier living and working conditions for workers. Men of influence who resist social reform are simply too much given to greed, but there is faith that even they will yield in time to God’s will for mankind.

Style. Connor is a thoroughly competent writer and storyteller. He can weave a complex plot and keep the stakes high so that the pages keep turning. He seems to believe that even in the most hard-hearted reader there is a tender spot he can touch. He plays the emotions like a Wurlitzer.

The opening chapters of the novel describe a pastoral setting that evokes a by-gone era of small agrarian communities where everyone knows everybody else. Popular novelists were still starting novels like this a half-century later, the story beginning in a small town in the Midwest or upstate New York. A pivotal scene there sets a young man on a career in the outside world. In this case, Connor has Barney Boyle assist in an amputation following an accident at a barn raising. His life course is set for him as he discovers he wants to be a doctor.

The point of view shifts among the novel’s chapters so we are not always following the same characters. Covering a number of years, the structure also tends to be episodic. This produces the occasional set piece that could almost stand alone as a short story. One is the gripping account of a man transporting a deathly ill patient in a horse-drawn wagon through a blizzard.

Suspense builds as a doctor is persuaded away from a poker game, and the sick man turns out to be dying of diphtheria. Suspecting an outbreak of the disease at the work camp where the man came from, the doctor gets in the wagon and has himself taken back there through the storm. It makes for compelling reading.

There may be an audience today for this novel among the readers of “Christian” literature, who like their fiction inspirational and who aren’t put off by what amounts at times to a lot of pious talk. The novel’s theology relies heavily on sentiment, and while it may seem old-fashioned, it reflects a kind of spirituality that still exists today. You find it in people’s comments in the social media as they accommodate to life’s uncertainty and vicissitudes.

Wrapping up. Ralph Connor was the pen name of Charles William Gordon (1860–1937), a Presbyterian minister of some prominence in Canada. He served 40 years at a single parish in Winnipeg, Manitoba. Two other novels were also top-10 bestsellers for the year in the U.S.: The Major (1917), and The Sky Pilot in No Man’s Land (1919).

Six of his novels and stories were adapted to film during the Silent Era. His autobiography, Postscript to Adventure, was published in 1938. In 1972 his Works, containing 43 titles, were published by the National Library of Canada. His novel, The Sky Pilot (1899) was reviewed here a while ago. The Doctor is currently available online at google books and Internet Archive. For more of Friday’s Forgotten Books, click on over to Patti Abbott’s blog.
Tweet