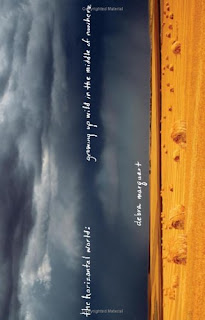 This is going to be Dakota Territory Week at BITS, with reviews of books by five writers who have written well about this big chunk of the continent that became North and South Dakota. I'm starting with this fine collection of personal essays that is part memoir, part social history, and part appreciation for the lunar topography of the northern Great Plains.

Out here, reminders of the geological past are everywhere in the flat expanse of inland seafloor, the rolling terrain of glacial morrain, and the rocks that surface each year in the fields and need to be cleared by hand. Part tongue in cheek, the book's subtitle is Growing Up Wild in the Middle of Nowhere.

Marquart, descendant of German-speaking immigrants from Russia, tells of the generations of her family, who have farmed the same North Dakota homestead since the late 19th century. Born the last of five siblings, she grows up driving tractors and pickups and doing chores from an early age, while yearning, always yearning, for escape - life being ever elsewhere.

With a career as a singer for a heavy metal band behind her and currently teaching creative writing at Iowa State, she looks back over the years, aware that her identity is still linked to her roots "in the middle of nowhere" and to a family that cannot comprehend any of the life she has lived since she left home. Most poignant are her memories of her father, whose funeral begins the book.

In another chapter, an episode on an out-of-state trip with both elderly parents ("To Kill a Deer") is a groaningly hilarious tribute to the impossibility of communicating across generations. Other subjects covered are the special trials of growing up female in a farming community, including the imagined trauma of being among its first settlers from the Old Country. There's also the tenuous self-esteem of North Dakotans whose most well-known celebrity is Lawrence Welk.

Marquart is a fine, entertaining, and moving writer, an eloquent voice for the diminishing number of those who grew up on small family farms on the Great Plains.

Coming up: Ian Frazier, On the Rez
Posted by Ron Scheer at 6:50 AM