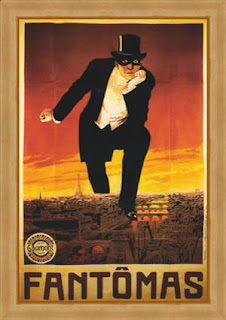 This is for any fans of the Parisian arch-criminal, Fantômas, brainchild of French pulp writers Marcel Allain (1885–1969) and Pierre Souvestre (1874–1914). The Hammer Museum in Los Angeles had a screening Thursday night of the third film in this franchise, Le Mort Qui Tue (1913). It drew nearly a full house at the Billy Wilder Theatre. Afterward, there was a panel discussion with screenwriter Howard Rodman, LA Times film critic Kenneth Turan, and pulp scholar Robin Walz.

Fantômas is a kind of Professor James Moriarty, a fiendish psychopath who kills for the apparent pleasure of it. When he is not lurking around in a black mask and black tights, he sometimes assumes the identity of people he has killed. After him, and never quite capturing him, are police detective Juve and a journalist Fandor.
Between them, Allain and Souvestre wrote 43 novels in the series, which was hugely popular. Five of the stories were made into films by Louis Feuillade during 1913-1914 (interrupted by WWI).
As an early feature-length film, Le Mort Qui Tue (The Death that Kills) moves at a slow pace for a thriller. Yet it has a mesmerizing quality as mystery is compounded by mystery. The body of a man strangled in his prison cell suddenly disappears. When a Russian princess is robbed of her pearls, the fingerprint left on her neck turns out to be that of the same man.
Unlike Hollywood films of the period, there is an absence of guns in the story. Victims get chloroformed, drugged, gassed, and (as already mentioned) strangled. One character narrowly escapes being knifed by a man stalking him.
Most scenes are long shots, filmed with a stationary camera, intercut now and then with startling close-ups. While most scenes are interiors, some were shot on the streets of Paris, where motorcar taxis share the road with horse-drawn wagons. In another scene, a man swims for his life in the Seine.

The intertitles, alas, were in French, and my franglais was just about adequate to follow the plot. But I needed the panel discussion afterward for help with the nuances. Prof. Walz, by the way, is an informed enthusiast and has a book on the subject, Pulp Surrealism: Insolent Culture in Early Twentieth-Century France. When asked about predecessors of Fantômas, he rattled off a bunch of them.
Live music was provided for the screening, as a musician alternated between an accordion and a piano. It was a recently restored print, provided by the French consulate. If it gets a museum showing near you, it’s worth seeing.
Further reading: Website devoted to Fantômas
Posted by Ron Scheer at 5:27 AM