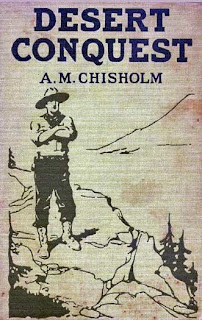 Here’s a curious western novel from Canadian writer Arthur Murray Chisholm (1872-1960). It was first serialized as Precious Waters in The Popular Magazine starting November 1, 1912, and then published in book form the following year, with illustrations by Clarence Rowe and a new title, Desert Conquest, or Precious Waters.

This is one of those westerns without cowboys, but it has nearly every other element that goes with the genre. It begins, in fact, with a train robbery that is actually a “cute meet” between its two central characters, Casey Dunne (the guy) and Clyde Burnaby (the girl). Don’t ask me where you get Clyde for a girl’s name.
The plot. While love eventually unites these two in promised matrimony by the end of the novel, the real conflict involves a railroad and a settlement of dry-land ranchers. The ranchers rely on a limited supply of river water to irrigate their crops. The railroad is building a dam to divert the river onto its own lands, for development and sale to new settlers.
Though this will make the ranchers’ lands as good as worthless, the railroad’s scheme is indifferent to their welfare and callously legal. Never mind any assumed water rights of those who came there first. The railroad can keep any threatened litigation in the courts for as long as it takes, until the ranchers go broke.
An engineer, Farwell, who hasn’t the least concern for the consequences, is assigned to the job of building the dam. In short order, he finds himself up against the armed resistance of the ranchers. The dam is dynamited while it’s still under construction, then the new system of ditches and flumes is sabotaged.
The two antagonists are the honest, hard-working Dunne and the company man Farwell, who efficiently serves the interests of his employer no matter what. They are equally dedicated, but Farwell is all work and no play. He’s married to the railroad – that is, until he meets Sheila McCrae, the spunky daughter of one of the ranchers. Though it doesn’t weaken his resolve to do his job, meeting her loosens his grip on his single-minded devotion to his career.
It takes almost the full length of the novel to resolve the conflict between the railroad and the ranchers. Although there is bloodshed and violence, the ranchers manage to win a bloodless victory. The way that happens has more to do with high finance and insider trading than is usual in the western novel.

The gunplay that produces new occupants for Boot Hill is secondary to the main plot. But these scenes and the characters in them come straight from the genre, and they are well written. Dunne’s foreman McHale would be at home in a story set in the Old West, and Sheila’s young brother, Sandy, is a double for Billy the Kid. The villains, Dade and Cross, are mean as they come.
Where and when. Chisholm is cagey about where and when the story takes place. His arid terrain where water is scarce could be just about anywhere west of the 100th meridian and within a day’s ride of the Rockies. A sprinkling of contemporary references puts it close to the time of the book’s writing. McHale, for instance, says he’s seen a “picture show” in Cheyenne.
But while there may be law enforcement in the nearest town of Coldstream, it doesn’t prevent an old-fashioned gunfight in the street and the ensuing extra-legal settling of scores. An actual sheriff doesn’t appear until the closing chapters, and when he does, he turns out to be a likable relic from the Old West, full of stories of how it used to be. So Chisholm has it both ways.
Women. Though they are young and single, Clyde Burnaby and Sheila McCrae are both powerful, independent women. Clyde comes from Chicago and has the independence that comes with being the sole heir of a fortune. The West appeals to her for the challenge it offers to live adventurously. Dunne, she quickly perceives, is a living example of the self-reliance it fosters.
Sheila, the rancher’s daughter, is a girl of the West. She is fearless and utterly honest. Though she spends a lot of time on a horse, she has learned the usual domestic skills. She can spruce up Dunne’s rough bachelor quarters so they are presentable for female visitors.
While the men surrender awkwardly to their feelings for the opposite sex, the women remain in possession of their faculties. Unable to be openly proactive romantically, they are experts at a game where men are amateurs. This is the conventional view of women found in these early western novels, where the strong, independent woman who can ride a horse shows up again and again.
What Dunne comes to like about Clyde is that she is “sensible.” About her, he observes, there is “nothing foolish or nervous or hysterical” (p. 181). Though Farwell expresses the same thoughts more bluntly, the two men are not far different in their regard for certain kinds of femininity. They like their women to be more like men.
So, there are two romantic subplots in the story, with scenes of intimacy that get no farther than kisses (and no fades outs either; Victorian mores prevail). They are an idealized portrayal of male-female relations in a frontier world where men are manly, and the women are, too.
As we find in Zane Grey and other writers, the frontier not only toughens men and women but enables them to experience the full power of their gender. For the armchair adventurers reading these books, the appeal of that notion needs little explanation.

The author. A. M. Chisholm is a hard man to learn anything about. Jon Tuska makes no note of him in his Encyclopedia of Frontier and Western Fiction. He has no film credits. A search of the Internet reveals that he was educated at the University of Toronto, class of 1895.
As a fiction writer, his stories began appearing in The Popular Magazine in 1906. His first novel, The Boss of Wind River, appeared in 1911 and was about the lumbering business. He continued writing fiction, chiefly for The Popular Magazine until 1930. He was a resident of Windermere, British Columbia, and a friend of fellow Canadian author Bertrand Sinclair (Raw Gold, 1908 reviewed here; and Wild West, 1926, reviewed here). Chisholm makes a brief appearance in Betty Keller’s biography of Sinclair, Pender Harbour Cowboy.
Picture credits: First edition of the novel.
Coming up: Peter B. Kyne, The Three Godfathers (1913)
Posted by Ron Scheer at 5:34 AM