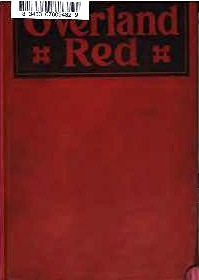 Old West meets New West in this novel set in Southern California by early western writer Henry Herbert Knibbs (1874-1945). Most of the story, in fact, would happily take place in the 19th century. There is a ranch with cowboys on horses, gold prospecting in the Mojave, and a big gunfight outside a saloon. But for good measure, Knibbs also throws in a motor car, Los Angeles, and references to movie-making.

Reality meets myth in the book, as well. The title refers to its central character, a former sheriff of Abilene, now an itinerant (hobo) on the run from the law in Barstow, where he’s mistakenly believed to have killed a man. Living rough, he has his wits and plenty of grit to keep him going.
The novel’s subtitle, A Romance of the Moonstone Cañon Trail, gives a whole different impression of the book’s contents. You might guess that you’re in for some poetic renderings of landscapes and sunsets or a dew-fresh story of young lovers. You get all that, too. The novel even begins with a long, long prose poem about the Camino Real. 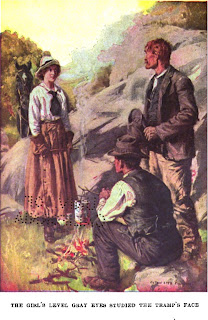 Becoming a man. At the heart of the novel is a study of how a teenage boy, Collie, becomes a man. An outcast, he has been adopted by Overland Red, and the two have been traveling together for four years when we first meet them. Collie is then taken under the wing of a ranch foreman, Brand Williams, who gives him a job as a ranch hand and helps him learn to be a cowboy.
For Knibbs, as for many of the early western writers, the achievement of manhood involves the discovery of longing and tender feelings for a young female. In this case, we get the spunky niece of the ranch owner, Louise.
Love between Collie and Louise smolders for a long time, dampened by the social distance between them. She is well-to-do and educated, he is neither. Both are pure-hearted and innocent. Collie knows nothing of love but the confusion his feelings generate. She wants him as a friend, but keeps deeper feelings at bay. It’s safer being a coy mistress of her doting uncle. 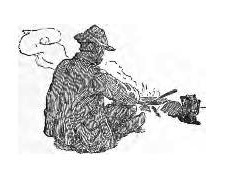 East also meets West in the novel, as yet another young man falls under the influence of Overland Red. He is Billy Winthrop, who arrives on the scene in a motorcar. He is rich and bored with life, looking for adventure. He is also a lunger, afflicted with consumption and expecting a short life. (Readers today need to be reminded that 100 years ago TB was the cause of 1 out of 10 deaths in America.)
Billy’s is yet another story of growing into manhood. He gladly puts up the capital to underwrite Overland Red’s gold prospecting in the Mojave. Though Red objects, Billy follows him into the desert. And so, working side by side with Red, Billy recovers his health. Honest labor and the dry desert air work their wonders.
Romance. Tuska and Piekarski’s Encyclopedia of Frontier and Western Fiction faults Knibbs’ novels for their weak plots and their too-heavy reliance on ranch romance. Such is not the case with Overland Red. There is enough of everything in the way of character and action to go around. 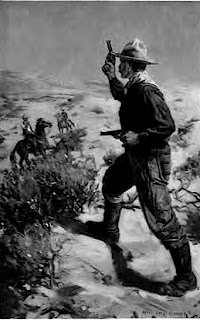 Romance in these early westerns seems an honest attempt to portray the inner life of characters to balance out the physical action required of them. You can see the stirrings of male-female attraction either as superfluous to the plot or as an important aspect of characterization. The theme of personal growth, especially for males, is a common theme of these novels. As finding a rewarding relationship with a woman is part of a man’s personal growth, romance seems an appropriate part of the story.
And it doesn’t have to be a woman. Friendship between single men, whether as equals or as mentor to a younger man, appears often for the same reason. Knibbs actually gives us both in this novel. Knibbs makes no secret of Red and Collie’s fondness for each other. In fact, it’s hard to think of an early western novel in which the central character is a loner, content with his own solitary company, distrusting everyone, male or female.
The romance between Collie and Louise complements the male-bonding that is celebrated in this novel. Both are there in service of a larger theme, the dependence of people on each other and the way attachments grow between them. These may be observed in a context of either guns or roses. 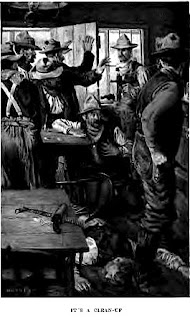 While Collie and Louise have their moonlight meetings, the cowboys on the ranch strap on six-shooters and spring into action to show what’s in their hearts. They quit their jobs to go to the aid of one of their number, who lingers between life and death after a near-fatal shooting. And they gladly follow Red as he settles a score with an outlaw, resulting in a Clarence Mulford-style shootout with multiple casualties.
Yet all of this fits together into the same spectrum of emotional connections between people who live in the same world. And the young Collie exists at the center of it all. Rejected by a drunkard father, he is embraced by everyone else his life touches, from Red who adopts him, to Louise who seals her love with a kiss on the closing pages. In the end, all that caring has gone into making a man of him.
Picture credits:
Illustrations from the first edition by Anton Fischer
Coming up: Along the Rio Grande: Cowboy Jack Thorp's New Mexico, White & White, eds.
Posted by Ron Scheer at 8:25 AM