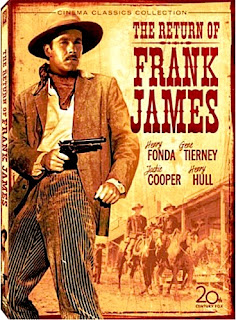 This film begins with Bob Ford shooting Jesse James in the back as he straightens a picture on the wall. After that, all resemblance to historical fact is coincidental.

It was made as a sequel to Jesse James (1939), with Henry Fonda reprising his role as Frank, and Austrian-born Fritz Lang as director. Given Lang's mastery of film noir, The Return of Frank James ends up as a noirish blend of a “western.” (I put “western” in quotes because I’m never sure what to call a story about two brothers from Missouri who are remembered for a failed bank robbery in Northfield, Minnesota.)
Though shot in color, the film has its share of moody shadows and night scenes. It’s also a corrupt world, where wealthy corporate interests – in this case the St. Louis-Midland Railway – are able to pervert justice. Though Bob Ford is convicted of murdering Jesse, his sentence is commuted and he’s set free.
Fonda’s performance is no less shadowed, as he pursues his brother’s killer and is pursued in turn by the railroad men. “Ain’t no law for poor folks,” Frank says grimly, “just the point of a gun.” Put Fonda in a soft cap and bib overalls, and you have his Tom Joad in Grapes of Wrath.
Highlights. This is the first of three westerns made by Fritz Lang, better known for his classics Metropolis (1927) and M (1931). He had fled Europe for Hollywood in 1936, where his work was often marked by a noir sensibility. This film is well told, with strong characters, and has many memorable scenes.
Most thrilling is a chase on horseback along a mountain trail that involves dodging around massive boulders and over narrow plank bridges, some gunfire, and the spectacular falls of two horses, flinging riders onto the ground. In the following gunfight, one man slips to his death into a deep canyon.
Suspense builds in a scene where Frank is robbing an express office. Alerted by the sound of gunfire, the town's citizens attempt to break down the front door while Frank is trapped inside. The final gunfight between Frank and Bob Ford in a (shadowy) livery stable is also nicely paced to intensify the suspense.

Romance. The handling of love interests in westerns is often awkward. This film has Gene Tierney as Eleanor, an aspiring Denver newspaper woman (“A lady reporter?” someone scoffs) who meets Frank, believing him at first to be someone else. The connection that grows between them is unforced and plausible.
Attracted to him, she also takes a genuine interest in his affairs. When he is lured from the pursuit of Bob Ford by the false arrest of his hired man for a killing during the express office robbery, she tries to persuade Frank to do the right thing. Here she plays the role usually given to women in western movies: making a plea for civilized values. And this time it works!
When Frank returns to Missouri to face trial for the killing, she follows. And she is there to the end as Frank (a) is declared “not guilty of anything” by a partisan jury, (b) finds a young compatriot (Jackie Cooper) dying from gunshot wounds outside the courthouse, and (c) shoots Bob Ford dead in a nearby livery stable.
After all that, other filmmakers would have found a way for a happy-ever-after ending. Not so this time. Not even a kiss. Frank and Eleanor say goodbye and give each other a little wave. Preview audiences must have objected, but the film remains true to its darkening view of human affairs.

Race. The film does something else that’s not common in westerns. It has a subtext about race relations. Frank’s loyal hired hand, Pinky, is a black man, and is referred to dismissively as a “darkie.” When he’s accused of the killing of the express agent, Eleanor has to make a case to Frank for the man’s humanity, despite his color.
Meanwhile, there are three other black actors in the film. Two of them are on the staff of a hotel – one a cleaning woman and the other a messenger boy. The third is a housemaid in the home of a well-to-do employer. Rather than simply being walk-ons, they speak lines and have personalities.
Granted, they are stereotypes. Pinky is a bit slow and can never remember to call Frank by his assumed name, Ben Woodson. The cleaning woman is a “mammy” who flees a room in terror when she hears spooky sounds. The housemaid is a cheerful worker whether serving at table or helping her mistress into a gown. But they are present in a way that reminds audiences that the West was not just for white folks.
Comedy. Not that it’s all dead serious. The sober moods are now and then leavened by humor. The courtroom scene at the end of the film is a circus of competing attorneys, a noisy standing-room-only crowd, and a judge attempting to keep order. Only Frank sits solemnly through it all.
In a nod to history, the film shows the Ford brothers in a Denver stage production reenacting the killing of Jesse James. This actually happened. Such was entertainment in the days before reality TV. Here, the play has a scene stealer in the form of a leggy blonde enjoying wolf whistles from the audience.
Frank and his young friend Clem make a comic escape when they are found by a railroad detective in a hotel room. While stopping to put on their boots before leaving at gunpoint, Clem jerks the rug out from under the detective’s chair. As he takes a prat fall, they dive onto him. Later, he is found bound and gagged, hanging unceremoniously on the back of a closet door.
Wrapping up. This is an enjoyable film that moves along at a good clip, with moments of suspense and action. Fonda’s performance is fine; Gene Tierney is lovely; John Carradine is a worthy Bob Ford. The western scenes feature snow-capped mountains and a portrayal of a bustling 1880s Denver.
History it’s not. Bob Ford was not killed by Frank James. Five months after Jesse’s death, Frank gave up his criminal career and turned himself in to the governor of Missouri in 1882. He was acquitted in two trials and never extradited to Northfield, Minnesota, for the killings that took place there in the raid of 1876.
He had a varied career in Missouri and Texas, such as was available to a man with his credentials. And he lived to the ripe old age of 72. He died at the family farm in 1915.

The "the dirty little coward" Bob Ford lived until 1892 and had a tent saloon in a silver mining town in Colorado, where he was shot dead by Edward O'Kelley. Bob’s brother Charley had already died, a suicide, in 1884.
Picture credits:
DVD cover, amazon.com
All other photos, wikimedia.org
Coming up: George Pattullo, The Untamed: Range Life in the Southwest (1911)
Posted by Ron Scheer at 7:23 AM