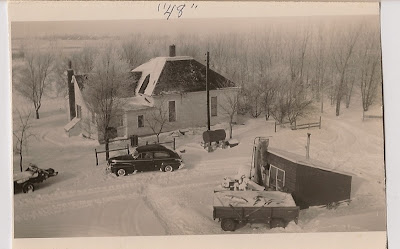 Thought today I'd observe the statistically coldest weekend of the year and commiserate with everyone enduring another Siberian winter. This is a pic my dad took from the top of the windmill on our farm in Nebraska, in what was to be remembered simply as "48".

The worst was still to come in the rest of that winter as snow blew from miles of open fields to the north and drifted deep into the shelter belts trees. As a seven-year-old, I could walk along in their upper branches. The vehicle tracks emerging from behind the house at the right show that we had already abandoned the drifted-shut driveway that connected the place to the road.

It was three years after the war, and we were driving that '46 Ford parked by the gate. We had that car until dad bought a new white Fleetline Chevy in 1952. (You'll have to take my word for it that I'm remembering this all correctly. There's hardly a soul alive anymore to contradict me on the details.)

The tank in the middle of the photo was for the fuel that burned in the heater that stood in the dining room outside my bedroom door. The only other source of heat in the house was a corncob-burning kitchen stove in the kitchen. We apparently had indoor plumbing by this point, as there is no path in the snow leading to the outhouse.

The shed in the foreground is a "brooder house" for baby chickens, which would come in large flat boxes from somewhere and spend their first months in the warmth of their own heater. Don't know what my mother thought of it, but there seems to have been no other place to park the manure spreader beyond spitting distance of the house (left edge of the pic).

The house disappeared sometime in the late 1950s after my father started a new house to take its place. I say disappeared because I came home from school one day and it was gone. Someone had bought it for a hired hand and towed it away. I never saw it again, except in dreams, where the home of one's childhood stays put.

For at least a couple years, only the basement of the new house was finished, and we lived there like old time pioneers in their dugouts. It was a dugout with central heating, however. And a piano.

The new house when it was done was enlarged by my cousin who farmed there until he retired recently and moved to Phoenix. I learned just a while ago that the place has now been sold to someone else. Along with all the other property going back to my grandfather's days, I can no longer lay even a distant claim to it. Except in dreams.
Posted by Ron Scheer at 6:07 AM