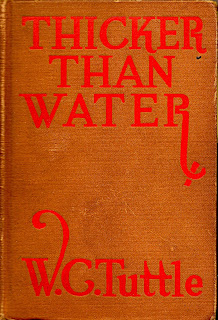 This 1927 novel is from prolific western writer Wilbur Coleman (“W. C.”) Tuttle (1883-1969). It features two of his readers’ favorite recurring characters, Hashknife Hartley and Sleepy Stevens. As in their many other novels and short stories, they are working cowboys who also solve crimes.

The crime, in this case, is a train robbery, which leads to a murder and various other unexplained incidents. Hashknife and Sleepy, who happen through town on their way to Arizona, decide to help out the local sheriff, as he attempts to piece together the clues. Eventually, a plot of considerable complexity is unveiled, involving a man’s dying wish and a long kept secret.
W. C. Tuttle was a westerner who had grown up in Montana. According to the FictionMags index, he’d been a sheepherder, cowpuncher, salesman, railroader, ranger, baseball player, and cartoonist. Another source says his father was a lawman.
Humor. As a writer, he was also a humorist, though in a curious way. The situations and characters in this novel are not comic, and there is hardly an amusing slant to the way the story is told. Only rare moments of humor crop up in the dialogue. A ranch cook, washing his boss’s clothes, complains: “Yuh hadn’t ought to wear a shirt so long, Rance. Not over six weeks, at the outside” (p. 157).
Eastern and western ways collide in an exchange involving a Wells Fargo agent, over-eager to have a robbery suspect arrested by the sheriff. “My end of the affair,” the agent says, “is only interested in a conviction.” A deputy corrects him: “Yore end of the affair is only interested in justice,” he says. “Don’t be so civilized.”
Yet there is a wry attitude in the way Hashknife does his job with the help of his trail buddy Sleepy (so-called because he looks wide awake, though he lacks his partner’s capacities for detection). Surrounded by mostly hard-bitten men, some of them meaner than others, Hashknife and Sleepy are no match for toughness.

They are not lawmen or gunmen, and they aren’t given to high-risk heroics. It’s Hashknife’s gift for observation and deduction and Sleepy’s teamwork that eventually solve the crimes. Once that’s done, they turn the guilty over to the law and waste no time getting back on the trail.
Buddies in the saddle. The two men are also friends, with pet names for each other, like “cowboy” and “long-fellow.” Their mock disputes disguise a mutual admiration and anticipate the kind of comic differences between Gabby Hayes and the various western stars he rode with.
Then there’s a moment of comfortable intimacy in a hotel room scene after the two men first arrive in town. Hashknife gets out of his trail clothes to reveal “a lean, muscular torso” and muscles that “rippled under his bronzed skin.”
His waist was narrow, hips long and lean, and with his high-heeled boots off he moved with the grace of a cat. Sleepy watched him admiringly. (p. 129)
He would have made a good boxer, Sleepy tells him, and their words resolve into an exchange of gently self-deprecating jokes.
Their appeal is in their ordinariness, men from humble beginnings without education, who have learned from experience. They also live a life many readers could envy, drifting from job to job, on good horses, wearing sixguns, unconcerned that they have little money, knowing that along the way they’ve done some good in the world – and not having any personal responsibilities.

Two quirks. Curiously, our team of cowboy mystery solvers does not show up until page 119 of the novel. They become involved by chance when Hashknife's horse Ghost disappears from a livery stable and another horse is left in its place.
Tuttle uses the first 118 pages to introduce us to a host of other characters and to set up the conflicts between them. These involve the winning and losing of large sums of money at the gambling tables. Tuttle immerses us in these scenes in ways I haven't come across in other western novels.

Another quirk is the use of truncated speech tags that specify how something is said, but not who said it. For example: "Deader'n hell," forcibly, if inelegantly. Here's another: "I'm no quitter, Jim," quickly. There are maybe a half dozen of these, so it's more of a quirk than a feature of Tuttle's style, but I've never seen it elsewhere.


Wrapping up. This is not historical fiction. Except for the heavy drinking and high-stakes gambling in saloons that fill much of the story, there’s nothing much to set this story before Prohibition. The setting is generic western, somewhere north of Arizona. There are ranchers and cowboys, but no evidence of cows anywhere or the ranch work that cattle require.
The plot contrivances involving mysterious parentage, a kidnapped woman, dying wishes, and long-held secrets borrow from Victorian melodrama and Charles Dickens. (Zane Grey also dipped his bucket in this well.) By contrast, we get the humorously ironic presence of Hashknife and Sleepy, who not only save the day. As the gun smoke clears, they have restored a happy-ever-after order to the world.
Starting with his first publication in Adventure in 1916, Tuttle wrote 1000 stories and scores of novels. His work also appeared in Short Stories, Argosy, Street & Smith’s Western Story Magazine, and others. Over forty of his stories were made into films during the 1920s.
Further reading:
James Reasoner reviews Shotgun Gold (1927)
Picture credits:
Pulp covers from Galactic Central, www.philsp.com
Coming up:
Posted by Ron Scheer at 6:52 AM