A friend long ago had a house out in the woods in Brown County, Indiana, where I spent a few days one summer when I was a young single man. The Rolling Stones' "Satisfaction" was on the radio, dinner was served on the back deck after midnight, and in the morning there were copperhead snakes in the backyard. Some memories stay with you forever. Anyway, Hiatus was what she called her place. I'm having one of my own right now.

I'm not the big crime fiction fan in the house. But I'm willing to indulge in a good crime film now and then. And I'm taking a break from the early westerns I've been obsessing over here in this blog to mention two of them. 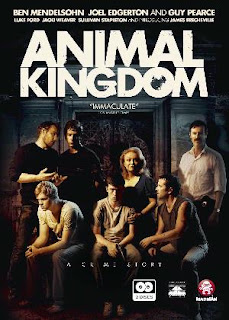 A reviewer on the local public station called the Australian movie ANIMAL KINGDOM the best crime film of the last 30 years. I'm no expert, but I'd certainly put it in my top 10. Like the Sopranos, it's about a crime family. These guys, however, are small-time criminals by comparison, bank robbers mostly. There's nothing really organized about their kind of crime.

To a degree, like the Sopranos, it's Greek tragedy. Blood is shed and power shifts from one member of the family to another. The central character, a 17-year-old boy, comes of age in a world where there is nowhere for him to go for safety - except into the sheltering (and perilous) arms of the family. A friendly cop, played nicely by Guy Pearce, cannot save him.

It's rare that a movie ends on just the right note - the final moments a surprise as well as utterly inevitable. As the curtain came down on this little family drama, it was like the final smashing chord at the end of "A Day in the Life." The logic of it was totally right. 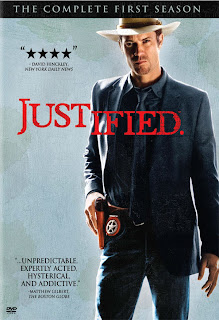 I've only watched one episode, so it's still a little early to tell, but my second recommendation is JUSTIFIED, a series that ran on Fox last year. The first season is on DVD. I was drawn to this series because the central character is based on one created by Elmore Leonard, and the show promised to blend Leonard's skill as a writer of westerns with his work as a crime fiction writer.

The central character, Raylan Givens is a deputy US Marshal working in his home territory, Harlan County, Kentucky. Givens, played by Timothy Olyphant, is a lawman straight out of the Old West, a fast draw, with nerves of steel, a wry smile, and the cool manner of a man who belongs in a Stetson, boots and Levi's. Meanwhile, his ex-wife says he's the angriest man she's ever known.

The ensemble of characters who enforce the law along with him are engagingly real. Holding two white supremacists at gunpoint after an attempted ambush, a female African-American deputy says, "Please, do something stupid." I look forward to the rest of the series, which I will parcel out over the coming evenings.

Meanwhile, there's a queue of books lined up that you will find reviews of here in the weeks to come. I'm currently finishing a book called Print the Legend about the development of photography in the West during the 19th century. Fascinating stuff, and I'll be sharing some of what I'm learning here when I finally get through it. It's long, scholarly, and not exactly a page-turner. 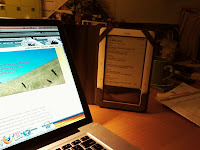 Following that, I have some more books (mostly novels downloaded to my nook) from the turn of the last century:

So don't touch that dial.

Coming up: Jack Thorp, Along the Rio Grande
Posted by Ron Scheer at 7:47 AM