Here’s another set of terms garnered from early western novels. Definitions were discovered in various online dictionaries, as well as Cassell’s Dictionary of Slang, Dictionary of the American West, The Cowboy Dictionary, and The Shorter Oxford English Dictionary.

These are from A. M. Chisholm’s Desert Conquest (1913) and  Herbert Henry Knibbs’ Overland Red (1914). Once again I struck out on a few. If anybody knows the meaning of “string one’s chips,” “dope book,” “kickie pants,” “stick to the bugs,” or “Red Cross beer” leave a comment.
alley = a china marble described as yellowish-white streaked with wavy lines of bluish green.  “She had a regular strawberry-ice-cream-soda complexion, and her eyes looked like a couple of glass alleys with electric lights in ’em.” Henry Herbert Knibbs, Overland Red.

Alphonse and Gaston = a comic strip by Frederick Burr Opper, featuring a bumbling pair of Frenchmen with a penchant for politeness; first appeared in William Randolph Hearst's newspaper, the New York Journal, on September 22, 1901. “He’s out to down me, and I know it. There ain’t no Alphonse and Gaston stuff when he comes boilin’ out, pullin’ his gun.” A. M. Chisholm, Desert Conquest.
black dog = A bad mood, characterized by anger, depression, or a mixture of the two. “‘Th’ black dog is on him sure enough,’ he observed. ‘Since his dam was blowed up, he has th’ civil word for nobody.” A. M. Chisholm, Desert Conquest.
black pill = opium. “Faix, ’uts no murder to kill a Chinaman, but a bright jewel in me starry crown, ye long-nailed, rat-eatin’, harrse-haired, pipe-hittin’ slave iv th’ black pill!” A. M. Chisholm, Desert Conquest. 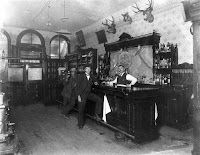 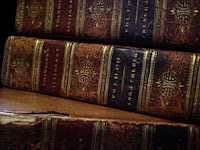