Brad Parks, Faces of the Gone 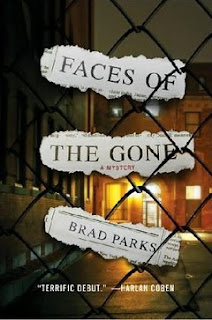 Four found dead in a vacant lot somewhere in Newark. Shot execution style. A young reporter for the city newspaper goes after the story. All of this in the first handful of pages.

For me, the plot in the best crime fiction has to start simple and then spiral out in enough directions to keep the surprises coming. Since the victims in this case seem to have no connection to each other, the complications come thick and fast.
The cops, of course, have the wrong end of the stick. When the deaths turn out to be drug-related, there’s no cooperation from the feds. Internal politics at the newspaper makes our reporter’s job even more tenuous.
Set all of this in the social fabric of a decaying city, and mire it in the sad agonies of newsgathering in the last days of the traditional newspaper. And you get a heck of a story, and those are the gifts Parks brings to his readers in this first novel.
Carter Ross, our thirty-something protagonist is, like Columbo, a fish out of water. Only the situation is reversed. The waters he navigates are the crumbling inner city and its gang members, drug dealers, exotic dancers, vagrants, drunks, and struggling poor.


Ever the object of scorn and amusement, he’s the white boy in a landscape of black faces. Meanwhile, his privileged background earns him his fair share of abuse from the old-school newsmen at work. And his straight-arrow pleated pants and button-down shirt get him the eye-rolling disdain of his queer-eye intern, Tommy Hernandez.
The tone of the novel is serio-comic, the seriousness drifting sometimes into the sentimental. Ross gets to feeling his liberal guilt at times, particularly about the hard life of under-class women. Still, getting information from an amply proportioned barroom dancer who does tricks between acts, he more than a little enjoys her company.
Later, in front of news cameras and not altogether dressed for them, she humiliates him on the street. The relationship between them adds a layer of racial, social, and sexual politics to the novel that may or may not be intentional. But one thing for sure, it’s a bit beyond Ross’s full comprehension.
The comedy is more fully developed and Parks takes greater risks with it. I laughed loud and often through much of the novel. The banter between characters is sometimes sharp and typically at Ross’ expense. More than once he walks away from an exchange wishing he’d come up with a snappier parting line.
Some scenes drift wonderfully into full-blown farce, as when Ross takes some hits from a king size joint to prove to the members of a street gang that he’s not a cop. They are so amused by his haplessness they make him an honorary member of the gang.
The bantering and the humor don’t always work. Also, the red herring Ross falls for near the end is so obvious that you have to assume Parks wants us to see Ross as not the sharpest knife in the drawer.
His constantly frustrated and uncertainly focused libido adds another dimension to his fallibility. Opportunities to bed a willing female editor pass one after another, and even a wet dream is interrupted by the smell of breakfast cooking in the kitchen.
Parks' narrative style harks back, I think, to an earlier school of crime fiction. It doesn’t want to be edgy or hard-boiled. There’s a warmth at the center that may not be to all tastes. It’s best in its observations about the business of newsgathering in a big city. And its contempt for local TV news is deep and scathing.

Parks' experience as a newspaper reporter serves him and his readers well, both for how it informs his story and in the sharp writing itself. Not surprised the novel has won all its recognition and awards.