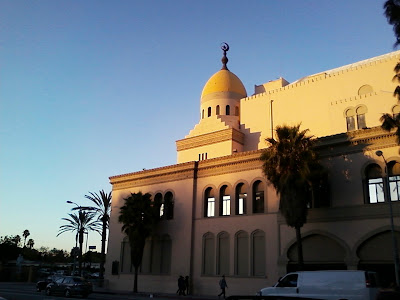 No, it's not a side street in Baghdad. Anyone who has watched the Oscars on TV until recent years has seen the inside of this building. It's the Shrine Auditorium in Los Angeles.

I walk by here most days on the way to/from my job. This time of year, as I'm heading for my car at the end of the day, it glows in the golden light of the setting sun. This was yesterday, about 5:10 pm. If there'd been a big event last night, the street would have been blocked off and lined with limos.

The Shrine Auditorium bills itself as having the largest proscenium stage in North America and a balcony that seats 6,300. It is operated by the Shriners, a fraternal organization of Masons that funds 22 children's hospitals. No, I've never been inside. I think you have to be invited.
Posted by Ron Scheer at 7:29 AM