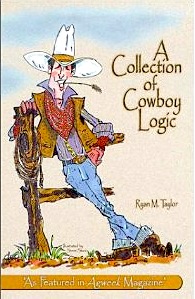 Dakota Territory Week concludes with this book by Ryan Taylor, a fourth-generation rancher near the small town of Towner (pop. 867) in north-central North Dakota. In his 20s and unmarried when the material in this book was written, Taylor is a columnist for Ag Week, commenting with tongue in cheek on the ironies and oddities of modern-day ranching.

The subtitle of his book is A Look at the Lighter Side of Going Broke, Raising Cattle, and Living on the Prairie. The 190+ short columns collected between these covers reflect on nearly any subject likely to cross the mind of a thoughtful rancher or farmer while cutting hay, fixing fence, or mucking out the barn.

A frequent theme is the negative economics of balancing the costs of operation against invariably falling farm prices. And he frequently considers alternative forms of income. He weighs in, for instance, on the subject of Rocky Mountain oysters, which if marketed as a high-priced gourmet food, like caviar, could make up for what little the rest of the calf is worth on the market.

We accompany him on trips to farm auctions in hopes of finding an old tractor or hay baler with some life left in it. We consider with him the many uses for vice grip wrenches (which also make great wedding gifts, he argues). There's a discussion of the effect of rainy weather on the many shapes that a hayfield can take as he dodges around the wet spots. There's a rumination on the difficulty of wiping out the evil weed, spurge. And so on.

Readers familiar with the trials and tribulations of making a living from ranching or farming will find the author wryly entertaining. For other readers, his book also offers an insight into a rural frame of mind, its values, beliefs, and concerns, not to mention its politics and somewhat jaundiced view of government, bureaucracy, and city folk.

In that regard, Taylor is a direct descendant of Will Rogers (see above). In his public speaking engagements (he studied mass communications in college), Taylor even does rope tricks. There's more at his website.

Coming up: Brad Parks, Faces of the Gone
Posted by Ron Scheer at 6:50 AM