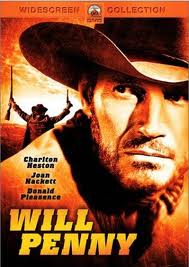 I’m never sure what to make of Charlton Heston. The roles he’s played politically and in epic movies are hard to forget when he’s on screen as someone else. Here he’s an aging cowboy who can’t read or write, down to his last few dollars and out of a job. All of this, and then things really go south for him.

Many western fans put this film in their top 10 list, and there is much to be said for it. The look and feel of it, the costumes, firearms, sets, cattle herding show a genuine effort to be authentic. Then there are Ben Johnson and Slim Pickens in supporting roles who had lived the life.
Its portrayal of cowboys is also truthful. They worked hard for low pay and were often drifters. As such, they had to be resourceful and self-reliant. If a man could not get himself started with cattle of his own while he was still young, he would not amount to much. Having little to offer a wife, he would live the rest of his years unmarried and alone.
Given all this, there’s a melancholy tone underlying much of the film, in spite of its lighter moments. Then, when misfortune leads Will Penny’s life to cross paths with another soul at loose ends (played nicely by Joan Hackett), we are suddenly in predictable Hollywood western territory. He is wounded and left to die by a maniacal Donald Pleasance, and she nurses him back to health.
The mother of a young boy (Jon Gries, the writer-director’s son), she has been deserted by a husband while emigrating west. She is educated, somewhat refined, the opposite of Will. Still, tender feelings grow between the three of them as they winter together in a line cabin.
This being a western, some violence is required, and what’s eventually played out is a scene that may haunt the imaginations of a certain kind of gun advocate. Will and his adopted family become the victims of a nasty home invasion. The menacing Donald Pleasance and his two grown sons reappear and have to be eliminated before order can be restored.
The action is exciting and full of surprises, many of them welcome. Then, after it all, there’s the denouement, and the degree of honesty in the film has to pass another test. Does Will choose to follow his feelings for this woman and her son, or is he prevented by the fact that he has so little in the way of material assets to offer them?
I’m not telling. You have to watch it to find out.
Which brings me back to Heston’s performance. I give him credit for taking a role that doesn’t call for winning chariot races or dividing the Red Sea. He makes Will Penny almost an anti-hero in the way he invites mixed feelings in the audience.
Something of a loser, friendless, getting old with no prospects, he is even pathetic at times. Yet Heston’s performance never quite tips into pathos. And the movie ends with a kind of courage Hollywood isn’t always known for.
Here is a short featurette from the DVD in which Heston and Jon Gries talk about the cowboys in the film:
Photo credits: wikimedia.org
Coming up: Wyoming Week