John McPhee, Rising From the Plains 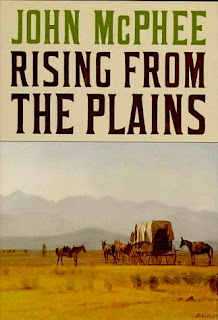 Wyoming Week continues today with this book by John McPhee, a writer with the remarkable ability to take a scientific subject (geology) and make it not just interesting but gripping. He achieves this in part by personalizing it and introducing an eminent field geologist, David Love (1913-2002), who takes him and us on a tour around Wyoming, his home-state.

There he describes over two billion years of the geological past as revealed in the cuts along Interstate 80 and in a side trip to Jackson Hole, outside Yellowstone Park. Love, it should be said, is very much a product of his upbringing on an isolated ranch in central Wyoming, his mother educated at Wellesley, his father an immigrant from Scotland who quotes William Cowper and Sir Walter Scott.

Love is independent, old school, hands-on, tireless, scrupulous, and an innovative thinker who made a significant impact over a lifetime in his field. He chose to work for the US Geological Survey after a short period of unhappy employment for an oil company.

McPhee captures his very individual point of view, his dedication to science, and his Western perspective in character sketches and fragments of conversation between them. He has a dry sense of humor, colorful turns of phrase, and a toughness that goes along with long periods of field work and sleeping rough under the stars. He was also a grand-nephew of naturalist John Muir.

The book actually begins with his mother's wintery journey by horse-drawn coach from Rawlins to central Wyoming, where she has accepted a teaching job at a one-room school. It segues between the story of his parents' courtship in the first decade of the 20th century and his travels with McPhee over 70 years later. Finally it devotes a long section to Love's own boyhood, growing up on his parents' ranch, with an older brother, among cowboys raising both sheep and cattle.


The accounts of surviving blizzards and floods that nearly wipe them out, the visitors passing through who may or may not be hunted killers, even an appearance (possibly two) by Butch Cassidy make this compelling reading for anyone with an interest in the early days of ranching in the West.

There's a brilliant section late in the book as McPhee describes Love's fascination with Jackson Hole while he was still a graduate student at Yale. After many years of walking the ridges and summits around it, he was able to develop a scenario of how it was formed over the eons.

McPhee's rendering of this scenario in words is vivid. In the mind's eye, you can see mountain ranges and seas rise and fall in all manner of climates from tropical to ice age, until the topography assumes its present configuration, which is still changing.

Read the book, and you won't see a western landscape the same. There's more about David Love, as he was remembered, here.


Coming up: Gretel Ehrlich, The Solace of Open Spaces
Posted by Ron Scheer at 5:24 AM