Charles Lummis, A Tramp Across the Continent (1892) 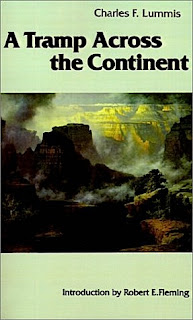 The strenuous life. Lummis was not too poor to go by train. He seems to have simply wanted an adventure. Young, newly married, and still in his twenties, he was of that Roosevelt-era generation of Harvard graduates who believed in living strenuously. He and Teddy were, in fact, friends.
Leaving home in September meant that much of his walk would be through snow in high elevations. Though the snow and cold were daunting, and he nearly perished in a winter storm in New Mexico, the worst day, he says, came in the deserts of southern California. There heat and thirst came closest to doing him in.
Content with his own company, he would have traveled the whole way alone except for being joined in mid-journey by a greyhound he called Shadow. Twice he was accompanied by men who stayed with him only a short distance.
Along the way he had hair-raising close calls. In Colorado, he narrowly missed being attacked by a penitentiary prisoner on a work detail. In Arizona, he fell from a ledge while hunting game and broke his arm. In an account grim enough to turn any gentle reader pale with disbelief, he describes setting the broken bone and then gamely walking on, his arm in a sling for the remaining 700 miles.
He carried with him a small rifle, which he traded for a six-shooter once he was in the West among cowboys. Rarely needed for self-defense, the firearms were chiefly for shooting game, edible food being scarce, even when he passed through settlements. An avid hunter, he also took down a seven-point black tail deer, taking a few steaks to eat and shipping the antlers ahead by train.
His route. The first stage of his walk took him across Missouri, where he claims to have spent time in a meeting with Frank James, now retired, and only two years after the shooting of Jesse. From there he crossed the plains of Kansas and Colorado, where he met up for a few days in Denver with his family, who were traveling by Pullman to Los Angeles.
Next he went south along the east face of the Rockies, stopping at points for some trout fishing and a climb to the top of Pike’s Peak, where it was now winter. All of this without a single purchase from L. L. Bean.
The real challenge began with the trek southwestward to Santa Fe and Albuquerque and then along the Atlantic and Pacific railway through Gallup, New Mexico, and Winslow, Arizona. From there to Los Angeles, he notes, there were only six “towns,” each offering little in the way of accommodation.
Generally, he slept outdoors, even when there was available shelter. Once on the sandy shore of the Colorado River on a side trip to the Grand Canyon, he describes covering himself in the sand warmed by his campfire.
The locals. In the Southwest, he was surprised in his discovery of the little known and seldom appreciated cultures of the Pueblo and Navajo Indians and the Mexicans. Apparently unschooled in anthropology, he knew only the racial stereotypes common at the time. All of that changed when he saw how the native tribes lived and observed their ritual celebrations with elaborate costumes and dances.
He was also taken by the warm, gracious hospitality he received while stopping at old land-grant haciendas. Both experiences had an impact on him that lasted throughout his life. He became an advocate of Indian and Hispanic rights and was the founder of the Southwest Museum in Los Angeles (now affiliated with the Autry Museum of Western Heritage).
Getting there. In his four months crossing the country, walking sometimes 50 miles in a day, he reports enough adventures to fill a lifetime. In the gaps between them, he meets up with men and women who welcome his company and earn his respect. He also takes the time to share opinions on a wide range of subjects: the railroads, miners and mining, cursing, jewelry making, capitalists, real men, Mexican food, Southwest history, and the Roman Catholic Church in the New World.
Lummis led a colorful life in California, starting out as city editor for Harrison Otis's Los Angeles Times, later editing and writing for the magazine Out West. He was an outspoken critic of U.S. Indian policies and an advocate of preserving California’s old Spanish missions. He got himself into scrapes and suffered illnesses. His personal life was apparently just as adventuresome and contentious as his public life.
Mark Thompson has written a biography of Lummis, American Character, which won a Spur Award in 2002. There’s more about the man here. Copies of A Tramp Across the Continent are available at AbeBooks and free at googlebooks.
Picture credits: wikimedia.org
Coming up:  Montana Week
Posted by Ron Scheer at 8:05 AM