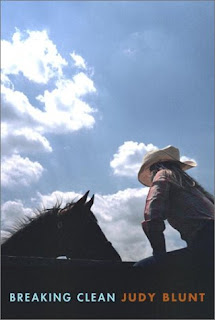 Montana Week at BITS begins with Judy Blunt's memoir of her early life in Montana ranch country. Hers is a far cry from Willa Cather's portrayals of frontier Nebraska. Still, there is something of the same spirit in both writers, each strong-willed, independent-minded, and talented in a world dominated by men.

Each maintains a love of the open prairie, but while Alexandra Bergson in O Pioneers! is able to hold her own and thrive on the land, Blunt is hemmed in and frustrated at each turn, a ranch wife-in-training through girlhood and finally a ranch wife with children of her own.
Physically strong and fearless as any man, she uses hard labor as a way to cope with a life-long belief in the fundamental unfairness of being denied opportunities simply because of her gender. In her thirties, she finally leaves the ranch and starts a new life in Missoula as a divorced mother, university student, and writer.
However, her book is not about the break-up of her marriage or her final decision to leave behind the life she'd been living. It is a carefully remembered recounting of her childhood, youth, and early years as a rancher's wife.
It's an often turbulent story, where every passage from one stage of life to the next is marked by resistance, dismay, and a sense of deep loss. The people in the circle of her family are captured in fiercely observed detail – especially her mother and father, her sister Gail, her husband John, and John's parents.
The physical world they inhabit is vividly rendered – the character of the arid, prairie land, the seasonal changes, the extremes of weather, the isolation, and the difficulty of making a living out here against the odds. She also captures the constraints of the social world they inhabit, and she articulates clearly the limited possibilities for personal growth and independence where gender roles and social norms are rigidly observed.
She provides a realistic portrayal of ranch work for men, women, and their children as long days (and nights during calving season) of routine physical labor. She also describes the never-ending work of cooking, gardening, child-rearing, putting up food for the winter, trips to town for supplies, doing ranch chores, and pitching in when the men need an extra hand.
Meanwhile, the chapters in her book center around the breaks in the routine – the unexpected events that become the material for "stories," the makings of family lore, local legend, or gossip (as when her newly-wed husband John is observed welding together the broken frame of their old bed).
Among the breaks in the routine, there is an Indian boy who is a student for a short while in her all-white one-room school, the winter of 1964 which maroons her family during a severe blizzard that wipes out much of their cattle herd, a prairie fire fought by the whole community, an older boy in high school who attempts unsuccessfully to have sex with her, a harrowing 50-mile trip to the nearest hospital as her daughter is burning up with a high fever.
Blunt also describes well the cultural clash that occurs when kids born and raised in the country find themselves navigating the town-oriented world of high school, with its very different adolescent mores and values.
Blunt is a fine writer and is able to wring suspense and pathos from her material. Starting as she does with the break-up of her marriage and then backtracking to tell her story from the beginning, she makes of the book a real page-turner.
While the book might well appear on a list of feminist literature, such a label is too limiting. The story she has to tell is much broader. It is at home with books about rites of passage and coming of age, the West, rural living, ranching, and nature writing. It’s available at amazon and at AbeBooks.

Coming up: Ivan Doig, This House of Sky
Posted by Ron Scheer at 7:05 AM