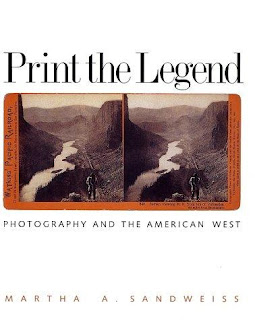 Anybody who knows John Ford’s The Man Who Shot Liberty Valance knows the origin of this book’s title. And it’s a good choice for an informative and surprising history of photography on the Western frontier during the nineteenth century.

The first surprise is that it took the photograph so long to catch on. Early daguerreotypes could not compete with the colorful and dramatic renderings of Western scenes and events by artists. Photos were typically used only as references for visual accuracy by illustrators, then discarded.
Regarded as having no commercial value, countless daguerreotypes of the West simply “disappeared” for lack of interest by collectors. No one seems to have considered their potential value to future historians.
Instead, the public flocked to theatres to see “panoramas,” which were the nineteenth century’s version of infotainment. Hundreds of feet long, these painted canvases were travelogues that took viewers across the western territories.
Like over-size scrolls, panoramas were unrolled from one side of the stage to the other, where they were rolled up again. With dramatic narration, they portrayed the West as it might be observed by an overland or riverboat traveler. (A hundred years later, they’d be reinvented as Disneyland rides.)
It was a period of exploration, as Americans took an avid interest in the new lands of the Southwest, annexed to the Union after the war with Mexico. Barely interrupted by the Civil War in the 1860s, expeditions crossed and recrossed the West. Typically, they were accompanied by sketch artists and photographers, whose work would serve future engineering projects – and help secure government funding for future expeditions.

If photo images were seen by a wider public, it was normally in the form of lithographs, which were artists’ renderings based on photographs. Lacking the resolution of photographs, they could also be freely edited, by removing, adding, or modifying visual elements (kind of like photoshopping today).
Unlike photos, which were laborious to replicate (a half hour exposed to sunlight to make one print), lithographs could be reproduced at high speeds and in volume. They could also be set into blocks of type for illustrating books and newspapers. By contrast, inserting a photo into a book meant manually tipping it into place, one at a time. Photo album books appeared in the latter part of the century, but they remained a massive undertaking and were not produced in large numbers.
A recurring subject in Sandweiss’s book is the way photographs of the West were intended to be understood by viewers. Photos were commercially marketed in sets, but available for purchase singly. Mounted on cardboard, they permitted printing on front and back.
The popularity of these photographs seems to have grown dramatically with the introduction of stereoscopy. These side-by-side images, seen through a viewer, created the illusion of 3-D. The stereopticon became a standard item in parlors across America, and a great many stereo photos were taken in the West to supply this market.
Reading the captions on these photos today, we get a message that reveals the economic and political forces at work behind many of them. Western landscapes were often shown as uninhabited, and viewers were encouraged to see them as ready for settlement and development, or as tourist destinations. Underlying all this was an unquestioned assumption of America’s manifest destiny.
The intended meaning of these images also raises the complicated issue of the Native Americans to whom this landscape once belonged. When pictures of Indians appear in these late-century photo collections, they are described in captions as docile and subdued and therefore “safe.”
Today, there is a little known assumption widely accepted by nineteenth century whites that Indians were a “vanishing race.” Somehow, through assimilation and other natural processes, they were destined to become extinct.
Thus, a mix of ethnographic and commercial interests sent photographers among Indians to record images of them before they were lost forever. Edward S. Curtis’s photos of native tribes were a tireless effort to portray them as they once were – proud, fierce, noble. Other photographers traveled to the abandoned pueblos of the Southwest to capture images of their ancient and forgotten past.
This was all a pretty obvious example of cultural imperialism. But Sandweiss argues that Indians were (not surprisingly) a good deal smarter about photography than many have assumed. There’s evidence that Indians enjoyed photo portraits as personal possessions. And today they are valued by Native Americans as records of their ancestral past. So from the beginning, the “meaning” of the photographs has been different for both viewer and subject.
The author’s last chapter is devoted to photographic records of cowboys. These, she argues, are inspired by a romanticism already developing in the 1880s. She finds evidence of a commercial market for photos of cowboys in the example of John C. H. Grabill who submitted his photos to the Library of Congress for copyright in the 1880s and 1890s. Among these images of life on the Wyoming and South Dakota frontier are pictures of cowboys at work.
Print the Legend is a scholarly book based on considerable research. It is illustrated with numerous photo images. Sandweiss is a history professor at Princeton and has won numerous awards for her books. There’s more about her at her website. Her book is available at amazon.
Photo credits: Wikimedia Commons
Coming up: Charles Lummis, A Tramp Across the Continent (1892)
Posted by Ron Scheer at 6:32 AM