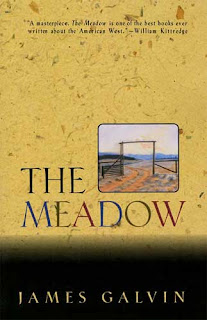 Wyoming Week concludes with this book about a mountain homestead by James Galvin. Its chapters fall somewhere between vignettes and prose poems, and reading them is like leafing through an album of old photographs. The storyline is made up of the threads of connections to be made between each of the word-pictures.

The book is part fiction, part nonfiction. Galvin refers to himself and his family in some of the chapters, but the person at the center of the book is a neighbor, Lyle Van Waning, who has spent most of his life living near the meadow of the book's title, in the high elevations between Laramie, Wyoming, and Ft. Collins, Colorado.

By today's standards of urban comforts and conveniences, Lyle lives a kind of pioneer existence, isolated much of the year by deep snow, living by his skills as a carpenter and builder, and the proceeds of hay harvested from his meadow. When he can do neither of these, he's in his shop making machinery parts, carved wooden boxes, firearms, and whatever else captures his fascination.

He is a deeply private and self-sufficient man, who never marries and seems to hold in his heart the strongest connection with a dead sister who committed suicide. (A painting by Clara Van Waning appears on the cover of the book.) Galvin captures in Lyle the kind of fiercely independent spirit that made survivors of those who first settled and thrived in the American wilderness.

There are other men and women associated with the meadow. And their stories are also told, including App Worster and his son Ray, whose family owns the meadow before the Van Wanings, and who lose it during the Depression. We also learn something of a neighboring rancher Frank Lilley, who is dying of cancer, and whose family continues to keep his ranch going.

There's also Ferris, who tries the frontier patience of his neighbors to the breaking point by dumping truckloads of old appliances on his property and denuding his small pasture with over-grazing. Taken all together, The Meadow is told with wonderful precision, a photographic attention to details, and a feeling for a kind of life that survives in spite of isolation and often hostile elements.

While Galvin does not romanticize the lives of his characters, he does celebrate them. There's a heartfelt attachment in this book to the region that is his home, the landscape and changing seasons, and the people who have put down roots there. It's a book for anyone with an interest in the lives of those who adapted to the harsh extremities of the frontier and cherished its stark beauty.


Coming up: Martha Sandweiss, Print the Legend
Posted by Ron Scheer at 8:14 AM