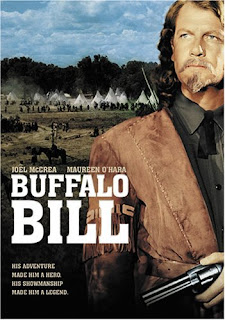 This western biopic is a happy mixture of historical fact and Hollywood formula. It is faithful to enough of William F. Cody’s life story to surprise you. But the complexities of the man and his times have been trimmed to fit into a tidy plot meant to suit its 1940s audience.

Characters. Cowboy actor Joel McCrea plays the man himself. Bill already has his credentials as buffalo hunter and Army scout when he first appears, like the Lone Ranger, to rescue the passengers of a stagecoach under attack by Indians. There, as the dust settles, he is introduced to Louisa Frederici (Maureen O’Hara), a senator’s daughter who takes an instant liking to him.

While the whites in the film are almost universally of the opinion that the only good Indian is a dead one, Buffalo Bill could teach a course in diversity. “Indians are good people if you leave them alone,” he asserts. Louisa gets into the spirit and tries to befriend Dawn Starlight by playing dress-up, but her cross-cultural efforts fall flat. 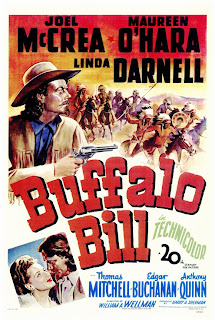 Plot. Alas, the War Department and the politicians don’t take Bill’s advice. Promises are broken and the Cheyenne and Sioux organize a full-scale pushback. Before long, Bill is scouting for the cavalry and engaged in a furious and epic battle. On foot and fighting mano-a-mano in the flowing waters of a river, he kills Yellow Hand. Dawn Starlight also meets an untimely end.

Now married to Louisa and already a father, Bill gets pushback on the home front as well. She wants a stay-at-home husband, not someone who chases Indians for the Army. They split up, and she goes back East. They are reunited, but only briefly, when he learns that their first-born is dying of diphtheria.

Invited to Washington to receive a Congressional Medal for his services to the Army, Bill uses the opportunity to voice his complaints about War Department policies on the frontier. He takes on the financiers and profiteers and, before you know it, is being swift-boated in the press and getting boos in public. He quickly descends to playing a caricature of himself on a wooden horse in an amusement arcade.

There Louisa finds him and rescues him from ignominy, and his old friend Ned Buntline gives him the idea of a Wild West show. If the East will not go to the West, he says, bring the West to the East. There follows a montage of riders under a circus tent, entertaining audiences including Queen Victoria and a grinning Teddy Roosevelt exclaiming, “Bully!” Meanwhile, impresario Bill turns gray and ages before our eyes. And a voice-over narrator celebrates his show’s message of freedom, adventure, and fair play. In the final shot, Bill salutes the crowd and rides off into history.


The real Bill. Joel McRae is good at playing warm, honest, decent cowboy heroes, and that’s what we get in The Virginian (1946) and Four Faces West (1948). You also get that in this film, and it suits the man Bill Cody, who was raised by abolitionist Quakers in pre-Civil War Kansas, married at the age of 20, and father of four children.

But Bill, one suspects, was larger than life. He was a man of grand schemes and not easily intimidated. The movie leaves out his stage career during the 1870s, playing roles inspired by adventure writer Ned Buntline. Bill obviously enjoyed the public eye and firing the public imagination. He was a showman who leveraged his dime-novel reputation into an entertainment operation on the scale of a mega three-ring circus.

McRae’s tenderhearted man in buckskin, torn from the bosom of his family to take up arms against Indian aggression, may have suited wartime American audiences. It would be another matter to show him as a self-promoter, romanticizing and commoditizing the West, while turning his name and image into an international “brand.”

Not that there’s anything wrong with that. You gather that Bill did many things with a twinkle in his eye, and that can forgive a lot. But it’s a far cry from the role played by Joel McRae in the film. You gather that Altman had the right idea in his Buffalo Bill and the Indians (1976). It’s too bad that movie is not a lot better.

Romance. The real story of Bill and Louisa Cody surely must be an interesting one. The movie, unfortunately, gives us Hollywood clichés. McRae is decked out in Bill’s trademark long hair and goatee when they meet, and he's already famous as “Buffalo Bill.” Maureen O’Hara is all 1940s glamour, ever in full makeup even on the dusty frontier. I’d like to see a photo of the real Louisa.

In real life, Bill met Louisa in St. Louis, not after an Indian attack on a stagecoach, and I don’t believe she was a senator’s daughter. He would have been a much younger man than McRae, maybe even clean-shaven as we see him here. Newly married, Bill tried running a hotel in Kansas before heading west to scout and buffalo hunt for the Army. Of his four children, two died at early ages.

Of interest in the movie is the great delicacy around the subject of pregnancy. Bill’s wife so subtly breaks the news to him that she could be talking about a surprise guest for dinner. We have the Production Code to thank for that. Thus the movie takes considerable liberties with their story. I’d like to see a movie or read a novel about the real one.


Wrapping up. Given all that, Buffalo Bill is not time ill spent. It is a colorful entertainment that does not ignore history completely. Bill’s sympathy for the Indians looks ahead to the revisionist westerns to come in the 1950s and 60s. At the end of the battle scene, he says of the dead on both sides, “They were all my friends.”

The supporting cast does much for the film. Thomas Mitchell’s huckstering Ned Buntline is never still for a moment. Edgar Buchanan is such a great character actor with his gruff voice. Each of his scenes is a pleasure. Quinn is plausible as a Native American. Darnell is lovely as a white actress playing a Native American.

William Wellman was no inexperienced director, and he keeps this somewhat rambling movie on its feet. Only the epic battle between the cavalry and an army of Indians seems chaotic and confusing. Shot in color, the film seems most comfortable in scenes that were filmed in the studio.

Buffalo Bill is currently available at netflix and amazon

. Overlooked Movies is a much-appreciated enterprise of Todd Mason over at Sweet Freedom.