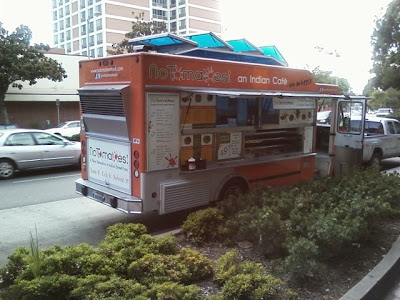 Don't know about other cities, but Los Angeles has become an epicenter of mobile sidewalk cuisine in the form of food trucks. We've had food trucks that make the round of construction sites for years, affectionately called "roach wagons." But the new food truck craze is something else, with a clientele of mostly young foodies ready to slap down $5-$10 for edible specialties that can be a little quirky and are a cut above fast food.

Food trucks usually have a jazzy look and playful names, like NaanStop, Crazy Creole Cafe, Global Soul Truck, Jogasaki Burrito, Knockout Taco Truck, Slammin' Sliders, Truck Norris, and Get Your Lard On. [For a little help with that last one, you may want to click over to wikipedia.]

They spend only a few hours in one place before moving on, and to keep track of your favorites, you need to follow them on twitter, as I do @SteelCitySndwch, which serves up an approximation of the famous all-in-one sandwiches at Primanti's in Pittsburgh (fries and coleslaw included in the sandwich).

In the photo above is No Tomatoes, which calls itself an Indian Cafe. They park sometimes near my office on Jefferson Blvd., late afternoons and evenings, and usually in a row of other trucks. Last night there were five of them. For a map of greater LA with the current locations of all gazillion food trucks, you can check online at Truxmap.

Photo-finish Friday is the bright idea of Leah Utas over at The Goat’s Lunchpail.
Posted by Ron Scheer at 6:29 AM