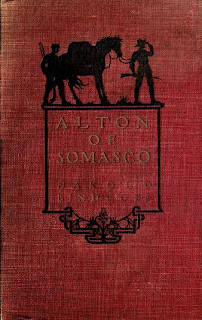 Western Canada also produced its western authors. Harold Bindloss (1866-1945), who was a Brit, sets this novel in the wilderness of British Columbia. The story he has to tell is a complex mix of adventure, melodrama, and romance.

Plot. Out here in the mountain forests, Canadian-born Harry Alton forges a livelihood felling redwoods and operating a sawmill in the Somasco Valley, 100 miles from Vancouver. A firm believer in progress and commercial development, he hopes to expand his remote ranch into a major profit center.

His plans are disrupted by the arrival of a financier, Deringham, from England. He brings news that Alton has inherited an estate in the old country. Alton has long ago cut ties with England and has no interest in renewing them. He considers the rightful heir to be the financier’s lovely but self-centered daughter, Alice, who has traveled West with her father.

Deringham has a bad heart and has come to British Columbia for his health. Turns out his finances are not in great shape either, and delaying the settlement of the estate is to his advantage. He engages a local land grabber, Hallam, to throw a spanner into the smooth-running works of Alton’s enterprises. Hallam, for his part, is a mustache-twirling villain who wants Alton out of the picture completely.

On a search for a lost silver claim, Alton is shot by an assailant in the hire of Hallam and nearly dies before he is found and returned to the ranch in a daring whitewater rescue. In the last chapters, ownership of the estate is transferred to Alice. She secretly provides the venture capital needed to bring in a road and a railroad for Alton and his neighbors, which open up access to their markets in Vancouver.

It’s finally down to a contest between Alton and Hallam to lay hands on the disputed silver claim. Crippled by his gunshot wound, Alton at first fails, but a court decision gives the claim to the winner of what becomes an exciting race of many miles on horseback. Alton finally succeeds, prosperity now lies within reach, and the lovely Alice agrees to marry him.

Character. In some ways, Alton is a boys’ adventure hero. He is a muscular, bronzed, Bunyanesque axe man, with considerable strength and stamina. Like a super-hero, he is fearless and supremely confident. He takes pride in being a man of his word, and he’s generous to a fault.

Unpolished but clearly of superior intelligence, he has ambitions that today’s business journals would call visionary. As he looks at a verdant mountain scene, what he envisions is the energy in a rushing stream put to use and the valley thick with saw mills.

When he’s shot, he must depend on others not only to survive and recover but to save the valley from falling into the hands of Hallam. Thus, there’s a lesson for him. As man and businessman, he is not able to go it alone. In the end, Alton is still the hero, but he shares the laurels with his friends and neighbors.

Romance. The love story in the novel parallels the one in Wister’s The Virginian (1902) so closely, you have to assume Bindloss knew of it. Both Alice and Molly the schoolmarm have pretensions that are in keeping with higher social standing. Both find their western men rough and unpolished, unsuitable as mates. Both spend hours at the bedside of their fallen (and unconscious) western man.

Molly may be wrong-headed about some things, but Alice can be deliberately manipulative and even mean. She works up such bad feelings for Alton at one point that she plays along with one of her father’s schemes against him. Readers would be forgiven for wondering how stupidly blind Alton can be to her faults—or for that matter, whether she’s much of a match for him at all.

Women. A second woman in Bindloss’ novel is clearly intended as a foil. Nellie Townshead, forced by circumstances to support her bankrupt father and sick brother, is an English girl pretty much at the end of her rope.

Bindloss gives her all manner of bad luck by contrast with the charmed life of well-to-do Alice. Pretty but careworn, she never loses her pride. So it’s Nellie who really does the heavy lifting for her gender in the novel. Alice may have wonderful, even fearful “symmetry” as Bindloss often reminds us, but Nellie has strength of character that far surpasses her.

Male bonding. The warmth in the friendship between Alton and his partner Charley Seaforth becomes a strong motif in the novel. It grows slowly until Charley is flung into the role of risking life and limb to bring the injured Alton down from the mountains.

The entire days-long journey that ends with a perilous canoe ride is told from his point of view. His terror only scarcely contained, suffering from the freezing wet and cold, he always has Alton’s welfare uppermost in his mind. His love and concern for the man is unbounded. “You are my partner, Harry,” he says to him later, “and the only friend I have.”

East vs. West. This being Canada, the geographical rivalry found in the typical American novel of the West shows up differently. Canada east of the Rockies barely gets a mention. Instead, the contrasts are drawn to England, where people are more refined and cultivated and social distinctions are more sacred.

Being raised in the wilderness and not having traveled, Alton regards civilization as a “veneer” soon worn away out in the bush. Compared to his visitors from England, he sees himself as “just a big rough rancher.” But it’s clear what Bindloss believes. Life in the wilderness has helped make Alton a man of stature. You don’t get that swanning around the English countryside.

Style. Bindloss writes for an audience such as might gather at a gentleman’s club. The writing has a high gloss, and the story unfolds in an unhurried fashion. With multiple point of view characters, he gives a broad scope to portrayal of the world they inhabit.

As for overall tone, there is something of Thomas Hardy in the way the story takes a fairly humorless view of human affairs. Strong as he is, life for Alton is a struggle, and he has losses that he does not recover from. Nellie’s misfortunes remind one of Hardy’s heroines, limited by poverty and gender.

Wrapping up. Though not set in the usually arid location of other westerns, Alton of Somasco shares with them the role of the western hero, a man of character and strong physical presence. His story takes place in a harsh, unforgiving wilderness environment, and he must deal with an outlaw caste that attempts to deprive him of life and livelihood.

Strongly plotted, the novel manages a large cast of characters, and there are long suspenseful passages that can grip the attention of even a modern reader.

Alton of Somasco is currently available at google books, Internet Archive, and for kindle

Image credits: Illustrations from the novel by R. Martine Reay