Meša Selimović, Death and the Dervish 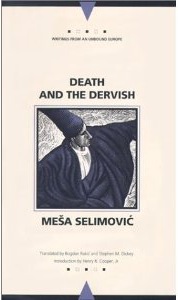 The psychological density of this suspenseful political novel captures well the paradoxes at the heart of human experience. For 455 pages the reader is immersed (almost imprisoned) in the twists and turns of one man's awareness of himself and the world around him. While it's a small world, maybe 17th-century Sarajevo (we're not sure), it is also a city under the heavy-handed governance of far-off Constantinople during the Ottoman Empire.

A reader familiar with the political realities of the 1960s, when the novel was written, can easily see it as an allegory of life in Soviet-era Yugoslavia. The dominant theme from beginning to end is a state of anxiety. One thinks of similar anxious and fearful moods captured in the compositions of the author's contemporary, Shostakovich.

Yet there's a universality that readers from any culture can recognize and identify with. The novel's narrator, Sheikh Ahmed, is tormented by his emotional conflicts, and much of his account of himself reads like Edgar Allan Poe. Like the humans we know ourselves to be, he behaves well at times and unforgivably at others.

The morally right course of action is often clouded by self interest, so that our estimation of him varies sometimes from one paragraph to the next. The more admirable character in the novel is his friend Hassan, who represents a good-heartedness and depth of character free of ideology and religion.

Still, the novel wavers in its point of view. On the one hand is an earthy folk wisdom, which can easily yield to mob violence and other forms of depravity, as the novel illustrates. On the other is a moral code as provided by religious faith and transcribed in scriptural texts like the Koran, which can be misused for ignoble ends as the novel also illustrates.

Selimović addresses the central moral issue of any time and place - the great difficulty of choosing the right course of action when the consequences of that action are impossible to predict and potentially perilous. This is a fine novel that wants to be read slowly and thoughtfully. It may be set in Bosnia, but it is about everyone.

First published in 1966, Death and the Dervish is currently available at amazon, alibris, and AbeBooks. Forgotten Books is the bright idea of Patti Abbott over at pattinase.