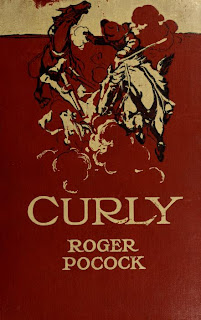 Although vengeance is a common theme in the modern western, Roger Pocock (1865-1941) provides one of its rare occurrences in the early-early western. Not only vengeance, but counter-vengeance. By the end of the novel, there’s been a truckload of scores settled.

In a story set in an eye-for-an-eye world, it’s an irony that the narrator is a one-eyed cowpuncher by the name of Chalkeye. And being a Brit, Pocock gives his own slant to the usual frame of reference. The central characters include a titled family from Ireland, and the back-story involves the forced removal of tenant farmers there from their homes.

Plot. Lord Balshannon has bought an old hacienda in southern Arizona. But his efforts to build a cattle ranch are cursed by one of his former tenants, Ryan, who has also come to America. Building his own business in gloomily named Grave City, Ryan becomes a wealthy man. He lures Balshannon into ruin with alcohol and gambling and eventually seizes his ranch, sending his dying wife into the desert to expire.

Both men have fathered sons. Ryan’s son Michael builds a financial empire back East, while Jim, son of the lord, runs the Balshannon ranch. A third father who plays a key role is McCalmont, the leader of a gang of outlaws who hang out at Robbers’ Roost on the Outlaw Trail. He has an offspring by the name of Curly, who we eventually learn is not his son but a daughter. Something of a wildcat in a cowboy outfit, she would be a match for Deadwood’s Calamity Jane.

Following that, it would take several paragraphs to untangle the twists of plot involving Curly, Jim, Chalkeye, and the others. In brief, there’s a shootout in a saloon, an escape from a Mexican jail, a kidnapping, the wearing of disguises, separations, reunions, and considerable travel on horseback across arid lands with the law in hot pursuit.

Women. The usual early western after The Virginian features a romance. The woman is young and pretty; the cowboy handsome and a natural gentleman. But this novel has a girl who’d rather be a boy. Purposely disguised to protect her from sexual predators, she has come to like the freedoms and the opportunities that go with wearing britches.

Curly is a firecracker. So thoroughly boyish, even the narrator refers to her as “he” and “him.” Jim has been her friend and co-worker for many years. Their friendship qualifies as male bonding. When she finally reveals her true gender to him, it’s only to account for her “weaknesses,” like sobbing when she kills two men in a gunfight.

The gender bending with a cross-dressing heroine keeps any romantic sentiment pretty much at bay. In the last chapter, Pocock jumps ahead to a quick glimpse of Jim and Curly’s happy wedded bliss. How husband and wife have resolved any awkwardness about gender roles we are not given to know.

Character. In Chalkeye’s opinion, “a right proper man is strong, rough, hardy; he ought to have a temper and be master, ready to work and fight for his women folk.” The man who comes closest to that qualification is the character of McCalmont, the leader of the gang.

While there’s no question of his being strong, rough, and hardy, McCalmont is also a complex figure. He has turned to crime after losing his Kansas homestead to a big rancher. Economic necessity and an appetite for justice have driven him to thieving and robbing trains and banks.

If he has claim to any honor, it’s that he steals only from the wealthy, and he is a fast and true friend to anyone who befriends him. Meanwhile, he is a brilliant strategist and tactician, the brains behind an operation that local law enforcement is powerless to stop.

He’s also honest about what he is. He knows that what he does is wrong, and he makes no attempt to hide behind the law. He accepts whatever punishment he has coming, either in this world or the next.


Cowboys. Working for Chalkeye are three young cowboys, overgrown youngsters whose wild and rambunctious behavior requires constant supervision. Kids, he calls them, “nice children, too, when they were all asleep.” But awake and on a rare visit to town, they are “full of dumb yearnings for trouble.”

Chalkeye himself has a cowboy sense of humor, which crops up in various forms of understatement and exaggeration. At the inquest for the shooting of Ryan, he says that Ryan died of natural causes “because it would have been completely unnatural for Balshannon to miss him at five paces.”

Realism. Pocock rarely romanticizes the West, saving his most pointed remarks for Arizona. He remarks often of the water or lack of it:

When water won’t cure thirst, but the juice in your mouth turns to slime caking in lumps on your lips, when the skin dries up because there’s no more sweat, when your eyes ache and your brain mills round—that’s Arizona.

When water is available, Chalkeye observes that it is “mostly too rich for bathing, being made of mud, cow-dung, alkali, and snakes.”

Wrapping up. English-born and an adventurer and pioneer, Pocock had a resume that made him look like a jack-of-all-trades. In 1889 he took one of the longest solo rides in history, going on horseback from Fort McLeod in Alberta, Canada, to Mexico City, a distance of 3,600 miles. His route took him along the so-called Outlaw Trail extending through the Rocky Mountains and into the deserts of the Southwest.

Fiction writing seems to have taken a backseat after 1905 as he was instrumental in organizing the Legion of Frontiersmen. With a membership drawn from upper class Brits scattered around the Empire, this was a clearinghouse for amateur intelligence gathering in the years before WWI.

Curly is currently available free at Internet Archive and for the nook.