This is a re-run from over a year ago when I was a brand-new blogger and famous for being unknown. So, once more with feeling: 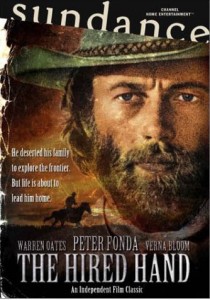 Peter Fonda directed and stars in this very authentic-looking and conceived film about two drifters who return to the wife and child that one of them abandoned six years before. Warren Oates plays Fonda’s friend and Verna Bloom is the wife. While unspecified in the film, we learn in Fonda’s commentary that the year is 1881, and it was shot in New Mexico.
The river in the opening scenes is the Rio Grande, and key scenes were shot in a dusty town of adobe buildings that the filmmakers found far off the beaten path. The bar where the men go for a drink is a haphazard construction that looks like it could tumble down at any moment.
Fonda also reveals that he wanted to create a new mold for the western by making it as realistic as possible in its details. Lovers of shoot-em-up action will be immediately struck by how slowly the film unfolds, reflecting the slower pace of life on the frontier, where almost nothing moves faster than a horse in low gear. Soft acoustic music plays under some scenes, but the film mostly captures the quiet of a pre-industrialized rural environment, the ambiance colored by birdsong during the day and crickets at night.
The two men may have worked as cowboys in their drifting, but we see them only as farmhands in the film, repairing a windmill, lubricating a wagon wheel, clearing brush. There are a few chickens, but no cattle. Their work clothes look worked in, although lean-legged Peter Fonda wears leather stovepipe chaps sometimes for no particular purpose (complaining about the heat in one scene, when removing them would have reduced his body temperature).
Both men have brushy beards and hair that is appropriately long for 1881 (also fashionably so for 1971). Verna Bloom wears no makeup, looking as plain as possible when we first see her, the many years of hard work and the climate already making her age before her time.
There is menace enough to be found among unsavory characters the two men meet, but violence when it erupts is sudden and over with quickly. It takes a kidney punch – not a lengthy fistfight - to bring down a man who’s spoken ill of a woman. And there is little gunfire. We hear a couple of gunshots off-camera early on in the film, and about a half hour passes before there are a few more. While the gunfight at the end is deadly, it’s also realistic in its brevity and confusion.
The film pushes boundaries in the portrayal of the friendship between the two men. Their connection is so strong that when they part it is as though one of them has died. What they owe to one another is stronger even than marriage. “He’s what you left me for, what you went looking for,” the wife tells her husband. The film is also frank in its sexuality, as characters speak about the subject with some candor, revealing both their sexual needs and their vulnerability. Meanwhile, what the film shows us of sex is tenderly suggestive and not graphic.
This film has been lovingly restored, with its “adult” material intact (rather tame by today’s standards but still surprising in its honesty) and stands as an example of portraying the frontier past without the mythology of the Old West. The Hired Hand is currently available at amazon and netflix.

Overlooked Movies is a much-appreciated enterprise of Todd Mason over at Sweet Freedom.