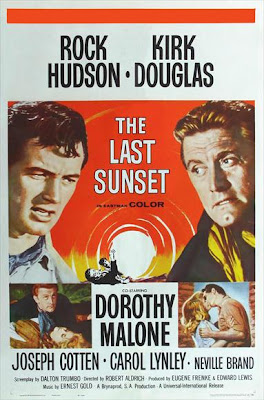 Start with two men in a Texas town, facing off at sunset for a gun duel. Then imagine a story about both of them that leads up to it. This one involves a cattle drive, the soon-to-be widow of the cattle owner, and a teenage charmer of a daughter. The cattle drive has Indians, bad weather, Mexican vaqueros, and three brigands with human trafficking in mind. It’s a full house.

Writers. This one was written by Dalton Trumbo, after his return to credited work, which followed over a decade of uncredited screenplays as a blacklisted Hollywood writer. The story is based loosely on a novel Sundown at Crazy Horse (1957) by Vechel Howard Rigsby.

A reading of the synopsis of the novel (found here) reveals some interesting differences. The film sets the story in Mexico, with the end of the trail on the Texas side of the Rio Grande, a far cry from the Texas-to-Wyoming trek in Howard’s novel.

Of the two men who meet at sundown in Rigsby’s novel, one is a gunman with a modified firearm to accommodate the lack of a trigger finger. A kind of Billy the Kid, he’s a devil-may-care sort, ready to sing and joke. The other man, dressed in black, is a sheriff with a warrant for the killing of his kid brother.

Smitten by the ranch owner’s wife and two young children, both men declare a temporary truce and agree to help drive the cattle to market. And so events are set in motion. 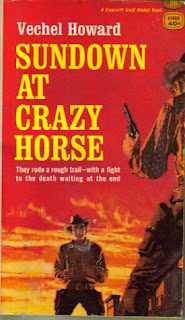 The film. The filmmakers dress the gunman in black, slick back his hair, and give the role to Kirk Douglas. All ten fingers are intact. The man with the warrant is played by stalwart and dependable Rock Hudson. The victim of the killing, we learn, was the husband of his sister, and there were further consequences. Grief-stricken, she hanged herself.

The ranch owner’s wife is the gorgeously blonde Dorothy Malone, and her two young children have morphed into the pretty and headstrong Carol Lynley. Douglas and Malone have some history, we learn. They were teenage sweethearts. Meanwhile, her daughter, about to turn sixteen, falls head over heels for Douglas herself.

Hudson also takes a tumble. As soon as the ranch owner (Joseph Cotten) has met an untimely end during a dispute in a taverna, Hudson offers a soft shoulder to the not-very-grieving widow. Rescuing her and her daughter from three hired hands (Jack Elam, Neville Brand, James Westmoreland), who try to abduct them, Rock wins her heart.

The alliance between Douglas and Rock remains an uneasy one. Like a card game, each plays his trump cards and seems to hold the advantage for a while. When Douglas shoots an Indian, Rock saves the day by trading away cattle instead of taking on casualties in a firefight. Finding Rock and his horse sinking into quicksand, Douglas rides off at first, only to return with a rope to drag him out. We lose the horse, though.

Action. On screen, the cattle keep moving, and you realize how few westerns are really about cattle drives. Even when they are, like Lonesome Dove, most of the action can take place somewhere off the trail.

In this film, the cattle play a supporting role. They’re not Longhorns, but they have long horns and look as authentic as they are able. In a night scene between Douglas and Lynley, obviously shot on a soundstage, 20-30 head of well-mannered cows get to mill about as extras.

Meanwhile, the movie is not all that committed to serving up two-fisted action and gunfights. Hudson’s daring rescue of Malone and a runaway mule team stir up some dust and get the adrenalin going, but much of the film is devoted to two-character scenes, each person making a pitch for something they want from the other.

Then there is the entertainment, as the vaqueros break out their instruments around the campfire and offer a song. Douglas sings along in Spanish on one of these occasions. When he feels like whistling, he also provides a little snatch of a theme written for the movie, “Pretty Girl in a Yellow Dress.”

Wrapping up. For authenticity, the film is hit and miss. It was in fact shot in Mexico in the west-central state of Aguascalientes. Several scenes take place among colonial period ruins, which may very well be the real thing. A fair amount of Spanish is spoken in the film with no translations offered.

Meanwhile, the appearance and costumes of the stars in the cast don’t venture far from Photoplay gloss. Malone’s hairstylist is a felt presence just off camera. Douglas’ all-black jumpsuit would have looked right on Jack Lalanne. He immodestly strips off his shirt to reveal a bronzed torso while giving himself a shave and conversing amiably with the teenage Lynley.

The closing scene at “Crazy Horse” challenges credibility as the town is built at the very water’s edge of the “Rio Grande.” A basic understanding of flood plains would call for a location on higher ground. On the plus side, the film takes place almost entirely outdoors, and the use of a hotel room for some of the final scenes makes a realistic contrast to all those big skies and open terrain.

All in all, The Last Sunset has an excellent cast and tells a good story. The film is currently available at netflix and amazon

. Tuesday’s Overlooked Films is a much-appreciated enterprise of Todd Mason over at Sweet Freedom.