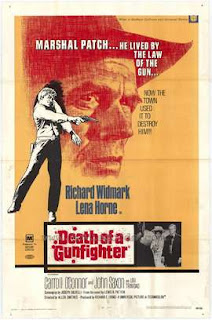 The story goes that Richard Widmark fell out with director Robert Totten during the making of this film, and Totten left the project. Disavowing any connection with the final product, Totten had his name removed from the credits. And thus began the career of fictitious Hollywood director Alan Smithee, whose name appears instead in the opening credits of this film.

From appearances, Totten seems to have been doing creditable work. The cinematography is often inventive, fresh, and interesting. It’s tempting to think the film would have been a whole lot better had he remained in charge. The finished product starts out well, gets to feeling a little choppy in the middle, and then becomes more than a little confusing at the end.

Plot. Widmark plays a town marshal who has outlived his usefulness. It’s now the 20th century and the men of the town council no longer have need for frontier-style law enforcement. But he doesn’t want to quit, and he can go public with some of their dirty secrets if they try to take away his badge.

They first try to get the county sheriff (John Saxon) to arrest him on murder charges and spirit him away. But the sheriff doesn’t quite cooperate. Seems he was once Widmark’s deputy, and the marshal had championed the young man despite the town’s prejudice against his Greek roots.

The editor of the newspaper, who has a dark secret to keep, tries to bushwhack Widmark. His attempt fails, and he commits suicide. When the editor’s son tries to avenge his father’s death, he gets shot in an exchange of gunfire with Widmark. Before he dies, the young man learns his father’s secret.

The rest of the film is a long bloodbath, as the sardonic owner of the Alamo saloon (Carrol O’Connor) and two cronies try to gun down the marshal themselves. Two get shot dead, and the bar owner is roped and dragged off through a corral of milling cattle by Widmark on horseback. The marshal is finally cut down in a barrage of rifle fire as he staggers, already wounded, into the center of the town’s main street. The town fathers have finally rid themselves of him.

Characters. The old-west marshal out of place in a new-west town makes for an interesting story. Hired many years ago, he cleaned up the town at the point of a gun. The film begins with his 13th fatality, as he shoots a man who tries to ambush him in a livery stable. Not exactly an outlaw, however, the dead man was the aggrieved husband of a woman Patch has apparently been bedding.

Afterward, Patch and the widow have a long scene together in which she laments a life wasted on a man she long ago stopped loving. There’s also a good deal of warmth lacking in her feelings for Patch, though her reasons are not clear. She tells him she hates him before he makes his exit.

Patch also has an ongoing affair with the owner of another saloon, played by singer Lena Horne. She keeps a stable of whores, who are an ordinary-looking bunch next to their stunningly beautiful employer. Patch, in a quick decision never explained, proposes marriage to her in the last reel, and within an hour the JP is pronouncing them man and wife.

Carrol O’Connor stands out in a role that looks ahead to his Archie Bunker. A long cheroot between his teeth, he and his two associates are for a long time a kind of chorus observing and commenting on the action. It’s a surprise when they assist the newspaper editor’s son in his effort to kill the marshal. And it’s another surprise when they begin a firefight with him themselves.

Young actor Michael McGreevey plays Patch’s only loyal friend in town. Surging with adolescent hormones, he is driven to near delirium by the attentions of an amorously precocious girl. The sight of some skin on the back of her knees has him comically pumping cold water over his head. It’s a bit of comic relief that makes an awkward match with the rest of the film.

The men of the town council are a range of types, with a white-suited mayor and a grizzled doctor who takes uncommon pleasure in doing health exams for the prostitutes in the saloon. The most cold-hearted of the men is a businessman with big plans to make the town a bustling commercial center. He also freely dispenses his bigotry on the town’s Jewish emporium owner.

It’s a large cast of characters, and while motivation is sometimes murky, the film manages them fairly well. The biggest hole in the story, however, is the undeveloped relationship between Widmark and Horne. Hard to say where the fault lies—in the writing, the editing, or the dispute over direction. There’s not enough of the two of them together, and certainly not enough of her. You want to hate a film for wasting such talent.

Wrapping up. The film is finally unsatisfying for its ending. It’s no easy task to pull off a story about a tough but likable lawman who gets shot down in cold blood. To raise that kind of unhappy ending to the level of tragedy, he has to do something or be someone who earns his death.

Perhaps he has compromised his heroic stature in a way that can’t be forgiven or forgotten, or his death serves some higher purpose. But Widmark’s death in this film doesn’t get to that level. And worse yet, his killers go free. The villains win. That’s not the way of the western.

The film is based on a 1955 novel by Lewis B. Patten, which first appeared in Best Western magazine before going to hardcover. (The novel later appeared as a Black Horse Western reprint.) The screenplay was by Joseph Calvelli, who has many TV credits and may be best known for producing numerous episodes of The Man From U.N.C.L.E.

The lush but not overbearing orchestral soundtrack also deserves mention. The use of Lena Horne singing a quiet ballad "Sweet Apple Wine" during the opening credits was a departure from the usual thunderous overture for Hollywood westerns.

Death of a Gunfighter is currently available at netflix. Overlooked Movies is a much-appreciated enterprise of Todd Mason over at Sweet Freedom.