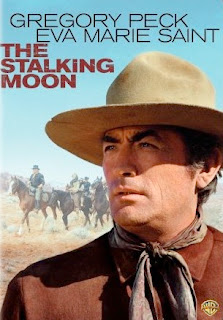 You can’t so much see as feel reverberations of the turmoil in the streets in this 1968 western directed by Robert Mulligan and starring Gregory Peck. Both had worked together in the making of To Kill a Mockingbird (1962), and it’s hard to think of two movies more different from each other.

Plot. Based on a 1965 novel by western writer T. V. Olsen, the film has a plot you could write on the back of an envelope. Peck is retiring after 15 years as a scout in the service of the U.S. Cavalry. When he leaves, he agrees to take with him a white woman (Eva Marie Saint) discovered in a roundup of Apaches. She has with her a young son, whose father is one of the men of the tribe.
The father pursues them, eventually tracking them to Peck’s ranch, where he unsuccessfully attempts to abduct Saint, then one by one kills the two other men living at the ranch. Peck, having been shot once in the shoulder, leaves the cabin on foot to find the Indian. After an exchange of rifle fire and a knife wound in the leg, Peck is finally in hand-to-hand combat with the Indian and manages to kill him. 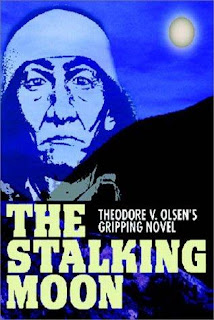 Spinning the genre. This seems to have been Mulligan’s only western. If screenwriter Alvin Sargent wrote any other western scripts, this seems to have been the only one to make it to the screen. He’s better known for his adaptations of Lillian Hellman’s Julia (1977) and the novel Ordinary People (1980). Today he’s writing Spiderman scripts.
What the director and screenwriter are up to in this movie is not all that easy to guess. Not only the plot is stripped down to a few basic elements. The dialogue is spare. Whole scenes are almost wordless.
The film refuses to offer even the suggestion of romance between Peck and Saint. Mulligan has deliberately prevented any glimmer of affection between them. Peck takes her on at his cabin as a cook and housekeeper only. The closest they come to any intimacy occurs in a scene where he tries to reassure her, drawing her closer to him, and she tentatively places her cheek on his shoulder.
Racial divides. The silence has something to do with Saint’s character. Separated from whites for a half dozen or more years, she speaks hesitantly and simply, as if English has become a forgotten language. There’s little expression in her face beyond apparent dread of recapture by her captor. There is also their son, who maintains a continuing look of incomprehension and speaks not at all.
She also retains her Indian appearance, her blonde hair a long thick thatch, lifeless from years of wind, sun, and desert air. She exists in a kind of limbo on the boundary between two cultures. As in her speech, she moves slowly and stiffly. Her son remains unchanged, in buckskin with long dark hair and a headband.
Robert Forster plays a half-breed scout for the cavalry, who follows Peck to his ranch to warn him that he’s being stalked by Saint’s Indian husband. Forster’s character has mostly crossed over the racial divide. He is bilingual and wears white clothing except for a breechcloth. He tries to draw out the boy, attempting to teach him poker and to count in English, but with little success.
Meanwhile, Saint’s Indian husband is a powerful presence for being mostly absent until the end. We get only glimpses of him, usually from a distance. He is murderously savage and leaves a trail of corpses as he pursues Peck. In his stealth, he seems to possess almost superhuman powers.
Peck. Gregory Peck had done several other westerns, notably The Gunfighter (1950). He seems not altogether comfortable in this one. There’s much footage of him on foot, tracking across rocky terrain (beginning with the credits), through woods, and over mountains. Called upon to express thoughts and emotions without putting them into words, he often looks uncertain.
You keep wanting to hear that deep, resonant voice of his, and you realize how much of Peck’s performance was in the way he spoke lines. Physically, he lacks the athletic presence of a cowboy actor like Randolph Scott. The costumers have hidden him inside a fleece-lined coat much of the time, and with his flat-brimmed hat he bears maybe too much resemblance to a forest ranger.
Wrapping up. In the search and destroy aspects of the plot, the men are like foot soldiers tracking an unseen enemy, and the movie alludes to a war that was currently being fought in Southeast Asia. Whether it has anything to say about that war is open to question. In some ways, it shows how Peck’s character is drawn into a conflict he never wanted. At the beginning, he overcomes a deep resistance to offering the woman and her son assistance.
As he must eventually defend and protect her, he risks his life to neutralize this indigenous threat to all of them. Not a warm or demonstrative man, he grows even more cold-blooded, especially when his friend, played by Forster, is killed. His friend dies in his arms, with hardly a word spoken, and Peck reaches a gloved hand to stroke his face. It is the only moment of heart-felt emotion in the entire film.
Whether Mulligan and Sargent achieved what they set out to do with this film is hard to guess. In a story about a woman abducted by Indians, they seem to have been after more realism than a similar western, Comanche Station (1960), reviewed here a while ago. And the result is strangely cool, a story told in a minor key, as is much of the music track. Accounting for the fact that she is still alive, Saint says to Peck, “I didn’t have the courage to die.” That desolate and traumatized tone pervades the movie.
While the story is set in Arizona and New Mexico, it was shot in Nevada, partly in Red Rock Canyon, and the widescreen glows at times with its stark beauty. The film is currently available at netflix and amazon. Tuesday’s Overlooked Movies is the much-appreciated enterprise of Todd Mason over at Sweet Freedom.
Photo credit: Wikimedia Commons
Coming up: Mohammed Hanif, A Case of Exploding Mangoes
Posted by Ron Scheer at 6:00 AM