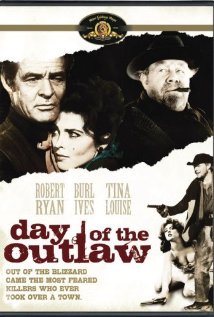 This gem of western noir stars Robert Ryan in another of his hard-bitten and slightly psychotic roles. Shot in black and white, the story is set in a small mountain town knee-deep in Wyoming winter snow. The location photography gives the film a gritty realism. So does the adult material. This is not a western for kids.

Plot. The first 20 minutes introduce us to the town’s residents, and tensions are running high. Cattleman Ryan is enraged by the encroachment of ranchers fencing off the open range. He says he intimidated and killed Indians and outlaws 20 years ago to defend himself. He’s ready to do it again.
His chief adversary is a determined settler, Crane, whose wife (Tina Louise) has some history with Ryan. To avoid a confrontation, she tries to fan a little spark of sympathy in Ryan and maybe a bit of the old romance, but he’ll have none of it. “You don’t have much mercy,” she says. “You won’t find much mercy anywhere in Wyoming,” he replies.
Just as a shootout is about to settle matters, a gang of surly outlaws arrives led by former Army captain Burl Ives. They have come into possession of a fortune in stolen gold, and the cavalry is in hot pursuit. Ives has taken a slug in his chest and needs a doctor. Under his orders the town’s residents are taken hostage, the local veterinarian removes the slug, and the weather worsens.
Tensions are now over the top. Only Ives is able to restrain the most libidinous and murderous of the men in his gang, and we learn that his time is running out. From what the vet tells Ryan, Ives is apparently dying from internal bleeding, while morphine keeps him miraculously ambulatory.
After the gang persuades Ives that a dance with the handful of women in the camp would make the men less irritable, Ryan makes a move to get the whole slimy bunch out of town. And slimy they are, except for the clean-cut David Nelson (son of Ozzie and Harriet), who has somehow got mixed up with this bunch. Tender shoots of young love even begin to spring up between him and the storekeeper’s daughter.
Ryan reminds Ives that the cavalry will be there as soon as the weather improves. To avoid a “Mormon massacre,” he says he can lead the whole gang over a mountain pass that will take them to Cheyenne. And off they go, the horses knee deep and then belly deep in snow.
When one horse is injured and has to be shot, Nelson is ordered to give up his mount to the rider who is now afoot and to walk back to town. Then Ives dies, as predicted. And thus begins a slow process of attrition in which the remaining gang members begin to fight over the gold and do each other in.
Themes. This grim western set in the snow and wintry weather recalls the crime film On Dangerous Ground (1952), shot in the snowy mountains of Colorado and also starring Robert Ryan. The film’s leering villains are not just outlaws but certified sociopaths. As they manhandle the women in the dance scenes, you can feel your skin crawl.
Meanwhile, the film backs away from what a modern western would happily relish, the opportunity for blood and gore. The scene in which the vet removes the slug from Ives’ chest even cries out for it. Ives and the doctor both break into a sweat, but that’s about the extent of the trauma. It’s a surprise to see Ives walking around afterward hardly worse for wear.
A fistfight between Ryan and three of the gang members cuts back and forth between close shots and shots from the distance, where we see the fighters and a scattered collection of observers. The effect is oddly abstract. Instead of the usual scene in which an excited crowd gathers around to cheer, the onlookers watch without moving and without a word. It’s a strange effect.
The weather deserves a mention. Often the clouds descend and the snow flies, which suits the desperate mood of the film. A brief moment of farce intrudes as a man falls asleep with his boots against a stove, and they begin to smolder. Instead of garnering a laugh, however, the point seems to be that no one else in the room either notices or cares.
As matters worsen, Ryan has some sort of change of heart and gambles with his life as he lures Ives and the gang out of town with the false promise that he knows a way through the mountains. It is an act of mercy, which he’s said there’s little of in Wyoming. The apparently selfless act seems meant in a way to redeem him, but Ryan’s not that easily redeemable.
And it does not lead to a conventional ending, where he is reconciled with his former sweetheart Tina Louise. Instead, what we get in the final scene is Nelson asking him for a job. And after a moment’s thought Ryan says, “OK, you won’t need this,” and takes away the young man’s gun. There’s a similar resolution at the end of Shane (1952), when Chris (Ben Johnson) a former adversary, asks Starrett (Van Heflin) for a job as a hand.
Production notes. The film was actually shot in the mountains of central of Oregon, near what was then known as Bachelor Butte. At the time, the area was in the beginning stages of what was to become a major ski resort and renamed Mount Bachelor.
The film was directed by Hungarian-born director Andre de Toth, who’s also remembered for the Gary Cooper western, Springfield Rifle (1952). The film was adapted from a novel by Lee E. Wells by screenwriter Philip Yordan, whose credits include The Man From Laramie (1955) and The Bravados (1958).
Noir fans need to give this one a viewing. It’s up there among the best. Day of the Outlaw is currently available at netflix and amazon. Tuesday’s Overlooked Films is the much-appreciated effort of Todd Mason over at Sweet Freedom.
Picture credits: Wikimedia Commons
Coming up: Old West glossary, no. 27
Posted by Ron Scheer at 6:00 AM