Nik Morton, Bullets for a Ballot 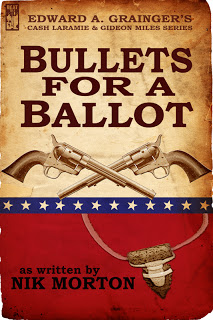 Review and interview
Edward Grainger’s Cash Laramie and Gideon Miles “fiction factory” has produced another hard-hitting western. This one from the fevered imagination of Nik Morton, whose extensive writing credits include several Black Horse westerns, crime fiction, and a veritable truckload of short stories. He’s also an illustrator.

Bullets for a Ballot finds Cash Laramie involved with a fierce mayoral election in a Wyoming town. The incumbent is running a negative campaign—so negative that he's hired killers to eliminate his opponent. The man's widow has then taken up her husband’s cause and against all odds is running for office herself.

It’s 1885 in Wyoming Territory, where women have had the vote since 1869 and women’s suffrage is still decades away in the 38 states of the Union. Reasons vary for the early adoption of women’s suffrage in Wyoming. You can bet money that it served both political and business interests. Some no doubt saw it as a way to counter the votes of recently emancipated male African Americans. It may also have been a publicity stunt.

History, however, doesn’t factor into the brutal electoral contest in the backwater town of Bear Pines, a place so out of the way that Cash Laramie has never heard of it. It’s just one wealthy, powerful bad guy with a town in his pocket and wanting to keep it that way. He owns the sheriff, and anybody he doesn’t own he intimidates.

As the novel’s chief villain, he has to share honors with his wife, a real nasty piece of work. She cheats on her husband, berates him to his face, and amuses herself with kidnapping and molesting minors. We gather that it’s her décolletage being featured on the book’s steamy cover.

As the violence escalates and the body count quickly goes into double digits, Gideon Miles joins Cash to help restore order. Not to be trifled with by two U.S. Marshals, she even lures them into an ambush. The woman is a walking argument for not only rescinding women’s suffrage but putting all of her gender under lock and key.

Nik Morton does a heck of a job weaving a high-stakes story around our favorite federal frontier law enforcers, Cash and Miles. While plenty of lead flies, both bad guys and good guys meet untimely ends. An invalid woman perishes when arsons put the torch to her house. A man suffocates in fresh cement while resisting arrest. I’ll leave it to thick-skinned readers to learn about the torture and unfortunate demise of another character, held captive in a root cellar.

One unlucky survivor is tied down with a fire lighted between his legs to encourage a confession. He cooperates but doesn’t last long either, unceremoniously shot from his horse while riding off without benefit of trousers.

Which leaves only the topic of sex undiscussed in this review. On the frontier, we learn, there was time enough between deaths for sexual congress—some consensual, some not. A woman had best be armed in the event of liquored-up and otherwise unwelcome male visitors. If it’s a Cash Laramie novel, she might also find herself in the company of a male who’s downright irresistible. All of which transpires in the book’s opening pages.

Enough said about that. I’ll just add that for readers who like nonstop action of all kinds, Bullets for a Ballot does not disappoint. Nik Morton is a literary pit bull. He knows how to take a reader by the nape of the neck on page one and simply not let go.

Bullets for a Ballot is currently available at amazon for the kindle.

Interview
Nik Morton has generously consented to an interview for BITS about the book and himself as a writer of westerns. So I’m turning the rest of this page over to him.

How was writing Bullets for a Ballot different from other westerns you’ve written?

It was deliberately darker. My last book Blind Justice at Wedlock has dark undertones as the plot is revealed, but Bullets went that extra distance in several respects.

What makes this novel “western” for you besides the fact that it is set in the West?

The characters of Cash and Miles David created are very much from the western myth, even if revisionist. I just had to step into Cash’s boots. The freedom to fight for a decent township against insuperable odds – that’s a classic western theme, I think.

Would the story be much the same or very different if set in the modern-day West?

People and emotions are the same throughout history. The situations and interactions are often similar, too. Naturally, the environment they find themselves in, the opportunities or lack of same, affect their emotional responses.

I feel that a western gives me the opportunity to write a moral tale – more acceptable to readers of that genre. Modern times tend to be more amoral, as do the fictional characters. Cash wouldn’t have such freedom to mete out rough justice in the modern-day West; that’s some of the character’s appeal.

What was it like working with David Cranmer, the originator and editor of the Cash Laramie series?

I first encountered David’s Cash character when he sent me “Cash Laramie and the Masked Devil” for the anthology A Fistful of Legends. He’d also accepted a couple of my stories for his BTAP webzine. So I was familiar with his style. David’s a generous man, allowing other scribes to write about his own characters. When he asked me to write a Cash novel, I was both pleased and honoured.

He provided a Bible for Cash and Miles – which incidentally must be growing considerably. I did a quick study of Wyoming, Cash’s home ground and once I checked on the dates in the Bible, and assured myself they’d (just) fit to include the women’s vote, I had my theme. Then I wrote a rough story outline, which he okayed. David’s main emphasis was on making the story dark.

How did you settle on the title of the novel?

The subconscious kicked in, I guess. I like playing with words – many of my books’ chapter headings will attest to that, as will several short story titles. Maybe we take for granted the freedom to vote – when in the past it had to be fought for, against prejudice and vested interests. And of course there are plenty of countries even today where a free and relatively fair vote is non-existent.

How has your writing about the American West evolved over the years?

I’ve only been writing westerns for 5 years. From the outset, I relied on research, and that hasn’t changed, though perhaps I now tend to bring in historical events, where before I didn’t.

How much is the actual history of the American West part of your interest in the genre?

Reading non-fiction for research and just for interest inspires any number of stories. My research library will provide me with plenty of material for years to come. I certainly admire the remarkable characters who lived through that period.

Is your writing inspired at all by western movies?

I grew up on a diet of TV western series – favourites being Cheyenne, Have Gun Will Travel, Range Rider, Maverick and Wagon Train. I’m sure they influence my subconscious.

If Bullets for a Ballot were made into a movie, whom would you like to see in the lead roles?

Difficult. Maybe Will Smith as Miles. Cash - maybe Russell Crowe, as he did well in the 3:10 to Yuma remake, as did Christian Bale.

What do you learn from your readers?

Quite a few of my readers have previously never read a western before and I hope that, since they’ve enjoyed my books, I may have converted them to the genre. All feedback is welcome. It’s gratifying when several readers want to be reacquainted with some of my main characters; all those people, still in my head, in stasis, so to speak; maybe a sequel or two will get written one day.

How would you hope to be an influence for other western writers?

By constantly challenging myself and always improving. For example, in Blind Justice at Wedlock, I decided on the hero being blinded at the outset, so he has to experience his world through other senses. I’m also in the throes of writing a book entitled Write a western novel in 30 Days. The subtitle – with plenty of bullet points!

What can readers look for from you next?

Hale publishes Old Guns on 30 April. The tentative title for my next possible Black Horse Western is The Magnificent Mendozas. It’s about a Mexican circus visiting southern Colorado. I have two other westerns in the hazy planning stages. I’ve also started a Private Eye novel, a Victorian detective novel, a pirate novel and the third Tana Standish psychic thriller, though I haven’t decided which one to concentrate on yet.

Anything you would like to add that we didn't cover?

No matter how dramatic the storyline, I try to leave room for some humour. Life’s like that – even if noir, there’s humour in there. Like many an author, I’m drawn to writing about the Old West because it’s a place and time where a man or woman can make a difference. Where justice might not be right, where right might only come from making a moral stand.

Thank you for inviting me, Ron.

Thanks to you, Nik, and every success.