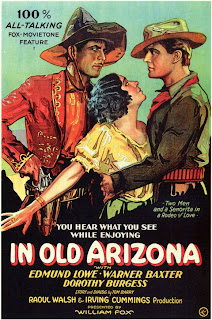 The Cisco Kid had killed six men in more or less fair scrimmages, had murdered twice as many (mostly Mexicans), and had winged a larger number whom he modestly forbore to count. Therefore a woman loved him.

The Kid was twenty-five, looked twenty; and a careful insurance company would have estimated the probable time of his demise at, say, twenty-six. His habitat was anywhere between the Frio and the Rio Grande. He killed for the love of it — because he was quick-tempered — to avoid arrest — for his own amusement — any reason that came to his mind would suffice.
So begins the O. Henry story “The Caballero’s Way,” first published in 1907. It was the introduction of a character, the Cisco Kid, who would have a long life in the movies, and on radio and TV. The Kid first hit the screen in 1914, with a silent version of O. Henry’s story, but his career didn’t take off until this film, In Old Arizona, an early talkie in 1928.
Warner Baxter won an Academy Award for his performance as the Kid and soon reprised it in sequels: The Cisco Kid (1931) and The Return of the Cisco Kid (1939). He was followed in the role by Cesar Romero, Duncan Renaldo, and Gilbert Roland. At almost 40, Warner was a bit long in the tooth to portray the author’s 25-year-old bandit. But he compensates for that by making the Kid something of an arrested adolescent.

The plot in a nutshell is that the Kid's firecracker of a girlfriend (Dorothy Burgess) takes an interest in a U.S. soldier (Edmund Lowe) and allows him to seduce her with a promise of taking her to New York. The Kid spends a lot of money to buy her a mantilla, and when he discovers she is two-timing him, he plots a deadly revenge.
All-talk. It’s easy to fault the film for its clumsiness, as some modern reviewers do who forget that Hollywood was just learning how to make talking movies. Considering its incorporation of sound effects, singing, and synchronous sound captured with primitive microphones, it’s pretty remarkable.
What surely struck its first audiences was the strong New Yorkese of Edmund Lowe’s army sergeant, Mickey Dunne. He could be straight out of Damon Runyon. Warner and Burgess have exaggerated Mexican accents, and some characters speak mostly Spanish.

Burgess seems to have had no film experience at all, and her line delivery comes close often to braying. But in the long scenes between Lowe and Burgess, you can hear every word, and that must have been cause for celebration for the new man on the set, the sound technician.
When the movie poster says “100% all-talking,” by the way, there’s no arguing that point. Some scenes are almost nothing but talk-talk-talk, more like a filmed stage play. Lowe and Burgess have a long scene sitting at a table together that would seem endless if it weren’t a saucy seduction full of pre-Production Code innuendo.
The whole movie, for that matter, has risqué subtext. The two men tend to wear their gun belts with holsters placed in front rather than to the side. When they meet in a barbershop, there’s a silly moment where they offer a little more than polite admiration for the size of each other’s weapons. 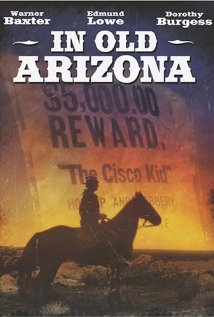 Outdoor scenes. Watching an early sound film with scenes shot outdoors, you need to give credit to the filmmakers for pushing the limits of the new technology. Capturing synchronous sound was vastly difficult in the early days, and it drove movies mostly indoors onto sound stages for many years.
This was a problem for westerns, which had got much of their excitement from action filmed in the great outdoors. This film manages to incorporate some scenes that hark back to those good old days, as the Cisco Kid delivers a herd of cows to a buyer and then three men attempt to ambush and rob him later. Another outdoor scene starts with a quartet of soldiers singing in close harmony, and the camera pans around to other soldiers who greet the arrival of another man.
The opening scenes, set in a dusty Southwest town, were shot on what was probably the back lot, and the frame is filled with activity and extras as passengers noisily board a stagecoach. Later, in the desert, they are held up by the Kid, who takes the strongbox and gallantly leaves the passengers unmolested. I’m guessing that the film’s nomination for an Oscar was partly due to the relative sophistication of all this.
Wrapping up. For western fans, the film is worth seeing as a novelty. While elaborating considerably on the basic story as told by O. Henry, it preserves the comic irony of the original. The main change is the transforming of the upright Lt. Sandridge to the streets-of-New-York Sgt. Dunne.
One of its two directors, Raoul Walsh had a long, illustrious career, including westerns, but is probably best known for classics like The Roaring Twenties (1939), White Heat (1949), and High Sierra (1941).
In Old Arizona is currently available at netflix and amazon. Tuesday’s Overlooked Movies is the much-appreciated enterprise of Todd Mason over at Sweet Freedom.
Photo credit: Wikimedia Commons


Coming up: Pauline Bradford Mackie Hopkins, The Voice in the Desert (1903)
Posted by Ron Scheer at 6:00 AM