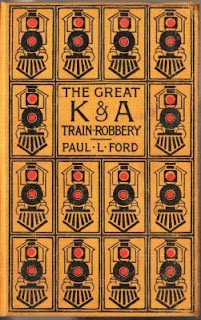 This is a breezy short novel for turn-of-the-century railroad fans. It makes it onto the BITS list of early westerns for taking place in Old Arizona and involving a bunch of lynch-happy cowboys. It also happens to be a romantic comedy.

Plot. Dick Gordon, our young narrator, is a superintendent on the K&A, a railroad line that runs from Kansas to Arizona. It connects two other lines, the Missouri Western and the Great Southern. These are each owned and operated by mighty railroad barons, and each of them has members on the K&A board of directors.
It is 1890. The Great Southern (no doubt a fictionalized version of Leland Stanford’s transportation empire in California) is attempting a coup at the next board meeting. Thus three registered letters en route to that meeting in a K&A mail car become key elements in the plot.
Traveling on the same train is Dick Gordon. He is four years out of a mechanical engineering program with not much to show for his Yale education but a memorable career on the football field. He’s accompanying a party that includes an executive officer of the Missouri Western by the name of Cullen, his Oxford-educated son, and two of his aristocratic school chums.
Along for the ride is the delightful Madge, Cullen’s charming daughter, who instantly steals away the heart of our Dick. She is, alas, out of his league. Besides his lowly position on the company’s organizational flow chart, Dick has a rival in the form of her brother's college friend, Lord Ralles, who has taken a proprietary interest in her.
Briefly, and not to give too much away, the train is stopped and robbed in a remote stretch of Arizona desert, and the three letters in question are taken. More mysteriously, the train robbers have taken nothing else, and they’ve left no sign of their coming or going in the desert sands surrounding the stopped train.
There follows a series of incidents in which the stolen letters get Dick Gordon into a heap of trouble. Pursued at one point by the aforementioned lynch-happy cowboys, he is eventually rescued by the cavalry, who after some delay arrive to save the day.
Romance. It will come as no great surprise that Dick Gordon finally wins the hand of Madge. The social distance between them fails to prevent her from finding him a suitable mate. Grateful for Dick’s efforts to keep the K&A out of the hands of the Great Southern, Cullen even sees to it that the young man does good.
Ford fleshes out an otherwise slim plot with a full-blown account of his young hero’s romantic aspirations and frustrations. We are there for every turn of his often-agonized emotions and each and every detail of his moments either with Madge or thinking about her.
Cowboys. Ford’s cowboys have their own stereotypical lingo. Asked if he is carrying a weapon, one responds, “Do I chaw terbaccy?” Threatening another man, one calls him a “stinkin’ coyote” and tells him to stay put “or I’ll blow yer so full of lead that yer couldn’t float in Salt Lake.”
In a word, they are ungovernable. They are drinkers, eager to accept a wild rumor as fact, and quick to rush a suspected wrongdoer to justice. While in the saloons, they are entertained by a “medley of cracked pianos or accordions.” Then when they overhear Madge playing a guitar and singing on the platform of the Cullens’ special car, they gather around and, “not being over-careful in the terms with which they expressed their approval, finally by their riotous admiration drove us inside.”
Villainy. The chief villain of the novel is Theodore Camp of the Great Southern, who is fighting for control of the K&A line, using any underhanded means available to him. When Dick Gordon refuses to cooperate, Camp has him thrown in jail on trumped up charges. Then he tries threatening him and, when that doesn’t work, buying him off.
The unseen organization itself would be the true culprit in the story. The company has a reputation for using hard-knuckle, extra legal methods to crush competitors—buying judges and legislators who will make laws that favor its interests. A reader is reminded of Maria Amparo Ruiz de Burton’s The Squatter and the Don (1885), which paints a similar portrait of the western railroads.
Wrapping up. Paul Leicester Ford (1865-1902) was born in Brooklyn, New York, the great-grandson of Noah Webster. An invalid, he was prevented from attending school, and he was largely self-educated, having access to his father’s private library of an estimated 100,000 books.
While he was well known in his time for his bibliographical and historical research and publications, he also wrote novels. Only one of them, The Great K&A Train Robbery, takes place in the West. Its familiarity with railroading may originate in his father’s years as president of the New London, Willimantic, and Palmer Railroad. Ford’s life ended abruptly in the library of his four-story home in Manhattan when he was shot dead by a mentally deranged brother.
The Great K&A Train Robbery was made into a movie in 1926 starring Tom Mix and Tony the Horse. The novel is currently available online at google books and Internet Archive and for the nook. Friday’s Forgotten Books is the bright idea of Patti Abbott over at pattinase.
Source: The New York Times

Image credits:
Illustration from the novel
Wikimedia Commons
Coming up: Jack Palance, The Lonely Man (1957)
Posted by Ron Scheer at 6:00 AM