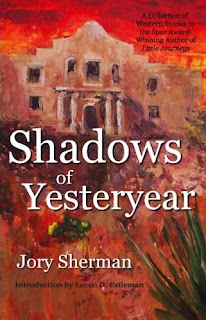 It was Troy Smith, I think, who recommended this recent collection of short stories by western writer Jory Sherman. Getting my hands on a copy, I found that its enthusiastic introduction was written by another favorite writer, Loren D. Estleman. I did not require a third opinion.

Jory Sherman has his own special touch with short fiction, as is evident in these eleven stories. The first thing you notice is the intensity of the storytelling voice. The situation in each of them is strongly felt, and it comes through in the language.

It was no surprise to learn on his website that he has also published poetry, for he typically uses poetic language to set a scene. By that I don’t just mean that the description is vividly detailed. The flow of his words captures and heightens the drama. You both see and feel.

Here’s a sentence from the first story, with line breaks as if it were a poem:

The stately stalks of yucca,
their blooms arranged
like yellow concho belts
hanging on store pegs,
stood like sentinels
and all about him,
off the road,
the cholla bristled
like exploded muffs of delicate lace,
so beautiful,
yet as lethal to the touch
as surgeons’ scalpels,
so sharp they’d slice through a child’s hand
if any dared to touch.

I could be wrong, but I don’t think you’ll find a sentence quite like that in Louis L’Amour. This one invites the reader to indulge the senses and then to feel a little chill as the “beautiful” and the “lethal” meet side by side.

That meeting between the beautiful and the deadly is a theme that runs through all of the stories in the book. Death haunts each of them. Somebody or something dies. And the action in all of them involves the gun as an instrument of death.

Another theme has to do with ideas about fate and destiny. A desperate man is saved from drowning in “Destiny’s Gun” but proves to be such a wife-beating scoundrel that he ends up being shot by the man who saved him. Did saving his life merely postpone an inevitable death?

Finally, another thread that runs through the book is the special regard in which its women characters are held. The men in the stories who have women to love really love them. The women are both strong and vulnerable, and their presence in a man’s life evokes powerful feelings.

A good example is Sherman’s “The Return of Talking Boy,” where Tom Horn tells of his growing affection for Hollie MacGuire. This is how he remembers her:

She smelled of the fragrance of earth and growing things. There were scratches on her arms from the brambles, white streaks on the suntanned skin. Her hair was tied back with a faded ribbon, but the loose strands kept moving over her face, as if caressing her.

When she smiles at him, something inside him melts. But Hollie is married to another man, and Tom’s days are numbered, so what might have been would never be. The emotions in the story ring bittersweet and true, and Sherman allows us to see that his male characters are both strong and vulnerable, too.

Jory Sherman has generously agreed to a short interview to accompany this review, and so I’m turning the rest of this blog page over to him.

The full title of your book is Shadows of Yesteryear: Western Short Stories. What makes these stories “western” for you besides the fact that they are set in the West?
They are set in times and places when the West was sparsely populated and there was all that grandness of mountains and prairie along with towns and settlements which were still struggling to become “civilized.”

Which, if any, of your stories in this collection could have been set in the modern-day West?
Most of them I suppose. The stories are about people and people adapt to their environment. There are still places in the West where life has not changed much despite the encroachment of civilization. And, in many cities today, there are still bank robbers and criminals of every sort, and there are places where men and women must stand their ground against government or corporate tyranny.

How did you settle on the title for the book?
I thought about the long shadows of afternoon and the evening of the West after its shining day was fading in memory.

Looks like your name at the bottom of the cover art. What were some of the choices that went into the cover design for the book?
I did paint the cover of Shadows of Yesteryear with the title of the book in mind. I chose the Alamo as a symbol of death and heroism and painted it with shadows to reflect both the title, and the story that is in the book. So, the cover and the title held a lot of meaning for me.

Using your own well-designed author’s website as an example, what advice do you have for writers wanting to make the most of their own site?
I have had a lot of problems with web designers and webmasters and my website is slowly undergoing changes under an experienced hand who is in the publishing business.

I think there is a lot of trust involved in choosing both a web designer and a webmaster, so the beginning writer should either learn to design a website or hire someone who knows books and how to promote them online. I don’t have time to do any of these things, so must rely on others to set up and maintain my website.

Can you say how this book came to be published by AWOC?
I met Dan Case, the publisher of AWOC at a writer’s conference and liked him. I was just venturing into the ebook market and thought he would be a fine publisher. He’s honest and marketing savvy and so far he has outstripped all my ebook publishers in sales and promotions.

What do you learn from your readers?
Not much. Some readers do not like my style of writing. Others do, but they do not know much about writing. Some readers write letters that praise a book, but just skate over the deeper meanings. Most readers comment on my imagery and tell me they feel as if they are in the scenes. They say they can smell the coffee and taste the blowing dust of the trail.

Let me add that I am influenced by other writers, living and dead, which include A.B. Guthrie, Jr., Jack Schaefer, my great aunt, B.M. Bower, James Joyce, Vladimir Nabokov, Loren D. Estelman, Richard S. Wheeler, James Lee Burke, and many others. I could go on...

What can readers look for from you next?
I think my time as a western writer has passed. I have one more Sidewinder book coming out from Berkley, but the series is not being renewed because of poor sales. That book is Nest of Vipers. And, I have another Ralph Compton book in production at Signet, The Omaha Trail.

Next month, The Baron Decision will be published by High Hill Press as both an ebook, a trade paperback and in hardcover. Some of my backlist books will be reborn as ebooks, including those titles I wrote for my Rivers West series at Bantam. I created the series and obtained the rights. I reverted those rights to those writers I hired for the series at Bantam.

Anything you would like to add that we didn't cover?
No, I think you covered quite a bit of ground and asked good questions. I thank you for your fine and complimentary review of Shadows. I love the short story and am still learning how to write a good one.

Thanks, Jory. It’s been a privilege having you as a guest today at Buddies in the Saddle. Shadows of Yesteryear is currently available in paperback at amazon and Barnes&Noble, and for the kindle.