Pauline Bradford Mackie, The Voice in the Desert (1903) 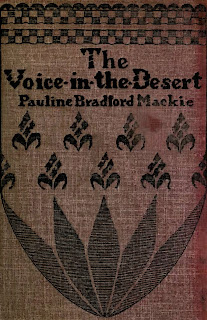 The desert Southwest had a strong appeal for early western writers at the turn of the last century, and it seems to have been women writers who discovered it first. Before this one, there was Florence Finch Kelly's With Hoops of Steel (1900) and Gwendolen Overton's The Heritage of Unrest (1901), both reviewed here recently.

The story of the novel could have taken place just about anywhere, except that the desert is so much at the center of everything. It permeates characters almost to the core of their being—theirs souls you could say. It’s there as a physical presence, beautiful and treacherous. In its unblemished purity, it seems also meant as a symbol of womanhood—more specifically the essence of womanhood, untouched by the social conventions of life in the city.
Plot. A young clergyman, Lispenard, and his wife Adele have been living for most of 15 years in the Arizona desert settlement of Sahuaro. They have two boys. While Lispenard is a “missionary” and has a small congregation, he gives much of his time to writing what are apparently books of moral philosophy.
An intellectual and in pursuit of a kind of ethereal spirituality, he is thoroughly happy living a spartan life in the desert. His wife Adele makes do with little and devotes herself to the raising of her two boys. While she continues to love and respect her husband, the magic of young romance has waned, and her practiced selflessness is wearing thin. She wants to be wanted.
The careful balance of their lives, financial and emotional, is upended when an old friend, Jarvis Trent, arrives in town. Trent and Lispenard were once chums, and both were rivals for the hand of Adele. After 15 years, Trent remains unmarried and still carries a torch for her. He’s also become a successful lawyer and has made a pile of money. She wonders whether she made the wrong choice.
So we have a love triangle that quickly turns into a quadrangle with another resident of the town. This one is the daughter of a local high-ranking military officer, now deceased. Also unmarried, she is a friend of the Lispenards and lives nearby in her father’s well-furnished Spanish-colonial house. She has been oddly named after a flowering desert succulent, Yucca.
In fact, it’s Trent who makes the quadrangle, as Yucca has long been in love with the clergyman. His caring and tender friendship has transformed her from a simple small-town girl to a woman of some intellectual development. In a word, she worships him. Meanwhile, she remains close friends with Adele, whose feelings toward her are understandably mixed.
Without telling her husband, Adele asks for $500 from Trent and jumps on the next train back East with the two boys. She has family there, and her boys can go to proper schools. Trent returns to his lawyering and doesn't come back until two years later, when he makes an unsuccessful play for Yucca.
Home for the summer holidays, the two boys are caught in a sandstorm while on a walkabout in the desert, and they are lost for two days before they are found. His health apparently compromised by all the stress, Lispenard suffers heart failure on the last pages of the novel and expires.
Themes. Never once ignoring the presence of the desert around them, the novel is committed like high-class soap opera to charting the course of her characters' shifting emotions. Mackie is fascinated by all the possible complications in their relationships. You keep thinking of D. H. Lawrence, who wrote of women in love and eventually found the desert Southwest himself. But in 1903, he was years away from writing his first novel.
Realizing the story is about a clergyman and his wife, you expect a certain amount of evangelizing. And if not that, at least a sanctimonious tone. Such is not the case. Hardly an advocate of conventional morality, Lispenard is a real outlier. Religious rituals, he believes, have no meaning in themselves. They point instead to greater spiritual truths, which can best be experienced through the beauty and austerity of the desert.
Romance. While you wait for the fires of romance to take over the reins of the plot, the women in the novel keep doing the sensible thing. An objective reader might well conclude that there’s not a man in the book that’s a match for either of them. While Mackie clearly likes men, she reveals an understanding of them that leaves her male characters looking a little shallow.
As one example, there’s the habit both Lispenard and Trent have of regarding Yucca as some kind of spirit or embodiment of the desert. Instead of seeing her as a person with her own individuality, they project onto her a bunch of notions that spring from somewhere in their deep, dark psyches. Jung would probably call it their Anima.
What the two men seem to see in her is a kind of beauty that is, like the desert, potentially treacherous. Not simply a beautiful woman, she is also a sorceress, a siren. Attracted by her beauty, a man can be lured to his ruin. There may be women in the world like this, but Yucca is not one of them. If anything, you can say her heart belongs to daddy, whose portrait in uniform dominates one room of her house.
So what we end up with is a kind of anti-romance. Folks bump up against the realities of each other’s unpredictable feelings and don’t live happily ever after. The romance of the desert, however, continues as strong at the end as it has been all along.
Wrapping up. Pauline Bradford Mackie (b. 1873), the daughter of a clergyman, was born in Connecticut and went to public schools in Ohio. When she wrote this novel, she was also married to a clergyman, Herbert Müller Hopkins (1870-1910), who died in early middle age after a few years of marriage. Hopkins was a published poet and novelist himself. One suspects that he may walk the pages of this novel as the book-writing minister, Lispenard.
The Voice in the Desert is currently available for the nook and at Internet Archive. Friday’s Forgotten Books is the bright idea of Patti Abbott over at pattinase.