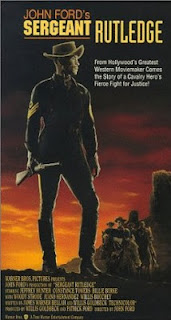 This well-meaning film has not weathered well. John Ford may have thought it an interesting challenge to make a courtroom drama, but the results are awkward. It wants to tell a story, set in the military, about race and racial prejudice. And that’s honorable enough, but instead of one story it tells two, and one muddies the effect of the other.

Plot. Sgt. Rutledge (Woody Strode), a respected officer in the Ninth Cavalry, is seen leaving the scene of a rape and double murder. The victims are an officer and his daughter. Finally apprehended, the suspect is brought before a court martial. There his guilt or innocence is argued by his counsel (Jeffrey Hunter) and the prosecutor (Carleton Young). Attempting to maintain order and assure a fair trial is Col. Fosgate (Willis Bouchey), president of the court martial panel. That’s one story.

The other story, revealed in the testimony of witnesses, concerns events preceding and following the arrest. Strode has been friends with the commander’s daughter, teaching her how to jump horses. The officers’ wives, a small flock of clucking hens led by Col. Fosgate’s wife (Billie Burke), naturally disapprove of this.

After the murders, the doctor called to examine the bodies observes that it was the work of a “degenerate.” It is noted that a gold chain the rape victim was known to wear has been torn from her neck. An examination of her dead father’s gun reveals that two shots were fired.

Strode is found at an isolated railway station, where he and a traveler (Constance Towers) have been under attack by a small band of renegade Apaches. During that attack, he has saved her life. It is also revealed that he has sustained a gunshot wound in his side.

She objects when Strode is taken prisoner by Hunter and a small company of black troops who arrive some time later. As they return to the fort, they attempt to intercept the band of Apaches who have been burning ranches. Strode is allowed to ride without being handcuffed, and when the troops are attacked by the Apaches, he is permitted to carry a rifle.

Given the opportunity to escape in the confusion, he remains with his troops and, under his command, they take a stand in a firefight with the Indians, who finally retreat. To one and all he is a hero. The men sing a song to him, “Captain Buffalo.”

The two stories finally converge in the last scenes, as Strode testifies that the Ninth Cavalry has been his home and his freedom. He has proved that he’s not “a swamp runnin’ nigger.” Facing the court, he says with pride and a quiet dignity, “I’m a man.”

Endings are hard, and this one is harder than most. A gold chain and a coat with initials taken from the body of an Indian are presented as evidence by Hunter. They are plausibly challenged by the prosecutor. Then, like a Perry Mason mystery, the guilty party finally confesses on the witness stand with an implausible display of melodrama. Strode’s Sgt. Rutledge is thus exonerated.

Romance. Strode’s character is at the center of a film bearing his name, but Strode gets only fourth billing, after Hunter, Towers, and (oddly) Billie Burke. Stapled onto both of the film’s stories is a romance between Hunter and Towers. They meet on the train that delivers her to the railway station where she first encounters Strode, and Hunter falls in love with her at first sight.

Meeting up again at Strode’s arrest, the two become more acquainted. She testifies at the court martial, and when Hunter wins his case, he stops her before she leaves, to tell her she’s the prettiest girl he’s ever seen. This wins him a big kiss as several black troops march by with sly grins. That’s the extent of the romantic subplot.


Race. There are degrees of racism, and at the opposite end from the viciously virulent, there’s a variety of condescension that is unaware of its own prejudice. That may have been difficult to see for audiences in 1960. But it makes the film a bit creaky today.

On the other hand, you can respect the film as an attempt to rise above its shortcomings. Race and sexual crimes are a volatile mix, and Ford is as careful as he knows how, to stop short of sensationalizing the subject. Instead, he holds up the prurient curiosity of the officers’ wives to a kind of comic scorn. Though the satire is played for laughs, it makes a point.

There is, in fact, a good deal of comedy in the film, which tends to trivialize the seriousness of the subject. The colonel is exasperated by his wife and her friends, and he’s secretly taking draughts of alcohol to keep him calm. There’s also a joke about using a book for military judicial procedures published for the Confederacy.

Still, the film turns ugly when the prosecutor plays the race card. I’m always of a mixed opinion about this in movies. It’s tricky dragging racist bias out of the closet because giving it voice can easily seem to countenance it. Instead of confronting racism, it confirms the prejudice that can lurk unspoken in almost everyone.

Casting Sgt. Rutledge as selflessly noble, posing him against the sky from a low angle, Ford makes him look like a statue on a pedestal. He may be a man, but we don’t know him as more than a fighting machine, with blood flowing in his veins and a heart that knows anything besides devotion to duty.

Wrapping up. The film was adapted from a story, “Shadow of the Noose,”written by John and Ward Hawkins for The Saturday Evening Post in 1955. The screenplay was by James Warner Bellah and Willis Goldbeck, who also collaborated on Ford’s The Man Who Shot Liberty Valance (1962). Bellah had provided the story for several Ford films, including Fort Apache (1948), Rio Grande (1949), and She Wore a Yellow Ribbon (1950). His novelized version of Sergeant Rutledge was published in 1968.

Character actor Willis Bouchey is an entertaining and believable Col. Fosgate. He had a long career in movies and TV, appearing in 200 roles, including the judge in many episodes of the Perry Mason TV series. The film was shot in Utah, where the Technicolor landscape is recognizable as Ford’s favorite western location, Monument Valley.

Sergeant Rutledge is currently available at netflix and as part of a boxed set of Ford westerns at amazon and Barnes&Noble. For more of Tuesday’s Overlooked Movies and TV, click on over to Todd Mason’s blog.


Coming up: A year of interviews
Posted by Ron Scheer at 6:00 AM