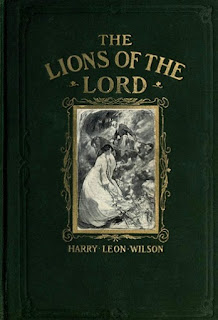 It’s a safe bet this novel was never a bestseller in Salt Lake City. Harry Leon Wilson uses a portrayal of early-day Mormons in the West to tell the unfortunate story of a true believer. Unlike Zane Grey, whose first novels simply cast a jaundiced eye on the practice of polygamy among Joseph Smith’s followers, this novel argues that it helped lead to a grievous tragedy.

In 1857, during a period of intense hostility between the U.S. government and Brigham Young’s Latter Day Saints, an attack was made on an emigrant train passing through Utah. The incident, known as the Mountain Meadows massacre, left over 100 dead. It was first blamed on Indians, some of whom took part. Years later, it was revealed as the work of a territorial militia.

Plot. The central character in this long, 520-page novel is a young man raised in the faith, Joel Rae. We follow him from the moment of the Saints’ departure from Illinois in 1846, where he has experienced the violent intolerance of nonbelievers, so-called Gentiles. Violence has taken the lives of his family, and the girl who has promised to marry him, Prudence Corson, leaves the Church to remain in Illinois.

Wilson follows the first band of Brigham Young’s followers in a difficult journey across the plains and mountains to a desert valley where they expect to be finally left alone. There they are joined by more wagon trains of Mormon settlers, and with a burst of industry the desert valley is made to flourish.

But the U.S. annexation of the Southwest and the discovery of gold in California produce a growing influx of non-Mormons that soon ends the isolation. The U.S. government assumes a civil authority that conflicts with the theocratic rule of the Church and its practice of polygamy. Brigham Young threatens to do battle with the U.S. Army if necessary, and in a siege of mounting war fever, the emigrant train is attacked at Mountain Meadows.

Joel Rae has thrived in the West, with a fiercely burning faith that disturbs the Church elders. For one thing, he has accepted the doctrines regarding polygamy as having been revealed to an infallible authority, but in his heart he has never approved of them for himself. Rae remains true to his first love, Prudence Corson, and believes them married in spirit.

Circumstances involve him in the massacre of the emigrant wagon train, and to his horror, among the women murdered is the sweetheart he left behind, Prudence. In a gruesome scene, she is not only killed by one of the Indians but scalped before his eyes. He finds her daughter among the still living children and whisks her away, finally raising her himself and allowing her to believe that he is her father.

Despite efforts at atonement, he is tormented by guilt for the events of that day. Eventually, he determines that the practice of polygamy is a false doctrine. At a church gathering he confronts Brigham Young himself with what he has come to believe. But he is shunned and declared an apostate. Expecting to be killed for his heresy, he returns to Mountain Meadows, where he dies.

Romance. Believe it or not, there is also room for a love story in this sad tale. The little girl he saves, named Prue after her mother, grows to be an attractive and intelligent young woman. She is met in the woods one day by a prince charming, Ruel Follett. At their first meeting, he doffs his hat, a courtly gesture she has only seen in the theatre.

He is, in fact, another child survivor of the massacre, having returned to avenge his own attempted murder. Now a handsome young cowboy, he allows her to try converting him to the faith, and a tentative affection grows between them.

When they talk of marriage, he tells her he could only love one woman and could never be married to more than one. She has long shared this aversion to polygamy herself, having found a deep desire to be someone’s one-and-only love after seeing a performance of Romeo and Juliet.

A crisis develops as Brigham Young himself wishes to “seal” himself to her in marriage and have her join his large stable of wives. Follett finally confesses his love and steals the bride on her wedding day. They stop to spend Joel Rae’s dying hours with him at Mountain Meadows, and then Follett puts her on a train back East to live with her grandparents until they can marry.


Character. For much of the novel, it is hard to say what Wilson wants us to make of Rae. There is a remarkable strength and nobility to his character, as he seeks to be a good man by doing God’s will. His struggles with his faith and his loyalty to his first love give him a dignity that we never see in the men around him, happily adding young wives to their families.

The young cowboy, Follett, is a conventional romantic hero and pales by comparison with Rae. He is thoroughly likeable but lacks Rae’s moral stature. He’s untouched by religion and religious authority, though he knows right from wrong and has kept himself above wickedness. Go to a church now and then, he’s been told by his adoptive father. Take what you need and leave the rest.

Villainy. A more predictable anti-Mormon novel, like James Curwood’s The Courage of Captain Plum (1908), reviewed her a while ago, would portray the Mormons as blatantly and sensationally evil. But Wilson is more reserved, showing them as resilient in hard times but otherwise complaisant and self-indulgent—in other words, human.

Brigham Young is cast more darkly as a man who becomes drunk with the power that has been given to him as God’s Prophet. For readers, a further strike against him is his rejection of democracy as a form of government. Rule by the people, in which people make up their own laws, is not God’s will, he tells Rae.

It is more than suggested that Young ordered the attack that resulted in the Mountain Meadows massacre. And even more darkly, he is the motivating force behind an outbreak of “blood atonements,” in which church members believed to be traitors are made the victims of ritualistic killings.

Collaborating with Booth Tarkington, he also co-wrote successful plays and two novellas. During 1919-1935, he was a frequent contributor to The Saturday Evening Post, and some of his stories were adapted to film. He lived much of his life in Carmel, California. Wilson is remembered today as a humorist whose novel, Ruggles of Red Gap (1915), was made into a Hollywood classic starring Charles Laughton.

The Lions of the Lord is currently available online at google books and Internet Archive and for kindle and the nook. For more of Friday's Forgotten Books, head on over to Patti Abbott's blog.
Tweet

Coming up: Saturday music, The Flamingos