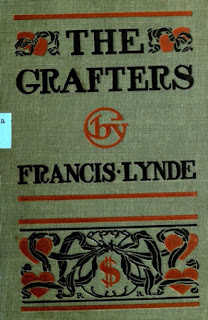 Francis Lynde came to fiction writing in mid-life and brought to his first published novel a worldly knowledge of business, law, finance, and politics. This novel of political intrigue in an unnamed state on the western plains also shows a gift for tight plotting, believable characters, and suspenseful storytelling.

Plot. A young lawyer, David Kent, takes a job as corporate attorney for the western division of a railway, the Western Pacific. A gang of corrupt politicians takes the governor’s office on a populist wave of discontent with the state’s eastern-owned railroads. They engineer legislation calling for state regulation of the industry. Then, with the help of a pliable judge, they get Kent’s railroad thrown into receivership.

The rest of the novel recounts Kent’s attempt to recover the railroad and put a stop to the “grafters” of the title. Added motivation comes with his loyalty to one of the railroad’s investors, Mrs. Brentwood. He wants to preserve her net worth for the sake of her two daughters, one of whom he has loved ever since a summer dalliance with her some years before.

Elinor Brentwood had fallen in love with the idealistic small-town lawyer, despite her mother’s wishes that she marry a much wealthier man. To acquire wealth and raise his stock in the eyes of Elinor’s mother, Kent came west to turn an inheritance into a fortune. Alas, he lost most of it instead. And now Elinor is being courted by a multi-millionaire, Brookes Ormsby.

As the novel gets underway, Mrs. Brentwood has come west for her health, with her daughters and Ormsby in tow. They take up residence in the capital city, where Kent works against all odds to regain control of the Western Pacific before the receivers run it into the ground. Ormsby, unexpectedly, befriends his rival for Elinor’s heart and helps with his millions to undo the criminals and restore the railroad to its rightful owners.

Character. Kent is an idealistic young man, with a New England sense of fair play that makes him easily the prey of the unscrupulous and greedy. Lynde sets up the story as a journey of his growth to manhood. Cautious and resigned in the opening chapters, he learns that he can take risks and play hardball with the best of them.

Ormsby, meanwhile, shows some qualities of character himself, though he’d gladly win Elinor away from Kent. A prime example of the idle rich, with a yacht and winters in Florida, he is an easy candidate for being the novel’s hated and despicable villain. Instead, Lynde surprises us by casting him as a decent chap who decides to support Kent’s effort to save the railroad—all the time hoping that Elinor will come around.

There are other men of character appearing at key points throughout the novel. There’s Hildreth the newspaper editor, eager to help Kent expose the scoundrels in office. Marston, a high-ranking member of the Party provides a “Deep Throat” kind of encouragement to Kent during a chance meeting in the smoking car of a train. Several loyal trainmen and crew of the Western Pacific risk all in an exciting railway chase that finally ends with the arrest of the governor.


Women. To encourage Kent and shepherd him along in his efforts, Lynde supplies one of the most intriguing women to appear in early western fiction. Portia Van Brock is an heiress who opens her mansion to the capital’s political and social elite. Cunning in her knowledge of how power is brokered in government, she is a clearinghouse of rumor and otherwise well kept secrets.

She takes a fancy to Kent and keeps pointing him toward a course of action that will uncover and undo the political chicanery that has overtaken the state house. Their scenes together are each an entertaining encounter between a worldly wise, urbane woman of no particular principles and Kent’s scrupulously honest country-mouse lawyer.

The other women in the novel pale by comparison. Elinor Brentwood is an intelligent and sensitive woman under the thumb of her domineering mother. Not wishing to defy her mother’s wishes, she has acquired some control of her life by being quietly passive. She bows to her mother’s will but draws the line at marriage to the wealthy Ormsby, whom she keeps at bay with a continually postponed engagement.

Romance. Portia obviously has a soft spot for Kent, and you sense that besides using him to play politics, she’s also grooming him for husband material. She’s too clever and cynical to surrender to the usual conditions of marriage, unless it allows her to preserve her independence. Being the wealthier of the two of them, she would surely have that with Kent, but there’s this one sticking point—his heart belongs to Elinor Brentwood.

At the end, he has acquired the wealth that permits him to provide for Elinor in the style to which she has been accustomed, thus satisfying her mother. Lynde, however, keeps the revival of their romance emotionally cool and respectful. While he has shown a flair for flirtatious badinage in Kent’s scenes with Portia, Lynde keeps the reunion with Elinor a polite meeting of hearts.

Style. Lynde is a master of plot complications and pacing. Suspense steadily ramps upward in the novel as the stakes continue to rise. There are twists, turns, and surprises aplenty.

The novel ends with a race against the clock as the governor in his private rail car is “kidnapped” and pursued at top speed by another train. There is a flurry of wires in attempts to rescue him; there is gunfire; and a locomotive engine, running out of water, is threatening meltdown. The last several chapters are breathless page-turners. Wrapping up. Francis Lynde (1856-1930) was a prolific writer, with short fiction appearing in magazines like Munsey’s as early as 1894. In 1904 he began a long relationship with The Popular Magazine, and in a lifetime career as a writer, he published over two dozen novels and well over 100 works of short fiction and serials.

Born in New York, Lynde attended public school in Missouri and went on to study literature at The University of the South, in Sewanee, Tennessee. For 13 years he was an employee of the Union Pacific railroad. His railroad novel, The Taming of Red Butte Western (1910), was reviewed here a while ago.

The Grafters is currently available online at google books and Internet Archive and for kindle and the nook. For more of Friday’s Forgotten Books, click on over to Patti Abbott’s blog.
Tweet