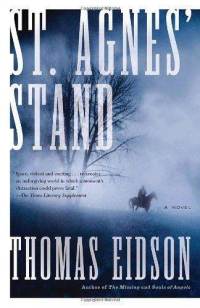 Three belief systems collide in this western novel of survival in a hostile land. All of them, as it happens, are a little shaky though they may seem firm and unquestioned on the surface. Each of them takes a turn at dominating the course of action and what seems to be the fate of the characters.

That’s just one level of a story that is deceptively simple on its surface. St. Agnes’ Stand rings the changes on the western novel’s traditional themes, while finding some new ones in the process. Just about every western writer you can think of would have written this story very differently.

Plot. It is 1858 in the desert wastes of New Mexico. Nat Swanson is a fugitive riding westward from Texas where he killed a man. Fleeing three pursuers intent on revenge, he stumbles upon two wagons full of children being shepherded by three nuns. They have been attacked by Apaches, who are already mercilessly torturing the driver and passengers of another wagon.

The oldest of the nuns, Sister St. Agnes, believes Swanson has been sent by God to rescue them. He not only believes but knows there’s not a chance in hell to accomplish that. Yet he stays with them, sneaking off under cover of darkness, to bring them water and venison.

Meanwhile, the Apaches are undergoing a crisis of their own. Their fierce leader, Locan, has botched the capture of the entire wagon train. In the third day of the siege, they have lost five of their own, and he is being challenged by an upstart, Joca.

Their shaman, traveling with them, is uncertain what to make of these women in black robes. They are human but lack fear. They don’t beg for their own lives but for the lives of the others. They are seen praying and thus assumed to be “spirit keepers.”

Days pass and Swanson finally engineers a daring escape by night, but the novel is still far from over. His plan to give his life for the women and children is confounded by Sister St. Agnes. She objects to being left out of his plans, as does one of the children, a mute and crippled boy who has become attached to him.

Character. Swanson starts out as the conventional hero of what people think of today as the “traditional western.” He is a loner, thirty-five years old, long hair tied back with a silk ribbon. The rest of his family were killed by Indians when he was eight, and he’s been living on his own since he was fourteen.

Alone in the world and without kin, he has hardened himself to his lonely lot in life. His only companion is a dog he’s risked so little attachment to that he’s never called it anything but Dog. In addition to firearms, he carries a crossbow. He has only one dream, taking ownership of a ranch in Santa Barbara, California.

He is already wounded when we first meet him, having sustained a gunshot wound in his leg. During the course of the siege, his arm is broken. Despite his injuries and all the cards Eidson has stacked against him, he’s able to achieve nearly superhuman feats.

Still, the man is clearly human. At one point, he reluctantly faces what he believes is the truth, that saving the women and children is impossible. He attempts to abandon them, but then turns back. He is exactly the “fool” that Locan judges him to be—willing to die for strangers. Such behavior is incomprehensible to the Apache.

Themes. The novel is divided into six sections, each relating the events of one day. Swanson is the point of view character until the third day when we are taken to the Indians’ camp. There we begin to understand their side of the standoff. And Eidson opens up the issue of faith that has already divided Sister St. Agnes and Swanson.

While she has repeatedly told him that he has been sent by God, he is a nonbeliever and sees her faith as simply a ploy to deny the inevitable. No, she argues, she had prayed for a rescuer and he had appeared. Swanson is the answer to her prayer. He isn’t convinced.

Also believers in a spirit world and spiritual powers, the Apaches can find no other reason for their failure to easily kill off the whites. This assumption is confirmed when Locan puts two arrows into Sister St. Agnes at close range and she is unhurt. Shaken with doubt, they hold off long enough to give Swanson, the women, and children a chance to escape.

Swanson’s unbelief is also shaken. Alone in the desert canyon and resigned to his own demise, he struggles with a vision of death in a godless universe. It is grievously hard for him to accept how death annihilates a life and leaves not a trace behind. He finds himself touched by Sister St. Agnes’ assurance that he has been loved every day of his life by God and his dead mother.

But at the end, Swanson and Sister St. Agnes are still of different minds. She saves his life to give him time to have a long overdue talk with God. He rides off not making any real promises. And Eidson’s story offers the same choice to readers. It neither discounts nor confirms whatever religious beliefs they may have begun with on page one.

Nuns. The nun in popular fiction and movies is rather a stock character, a woman of uncommon will power and self-sacrifice. She may be pretty, but she has the courage and determination usually expected to be found in males. Yet while seeming to be self-sufficient and self-reliant, she defers to God as the source of her strength.

Thus she is often at odds with men, challenging their values and beliefs about God, women, and themselves. Nuns in fiction are a third gender, inviolate and typically exasperating at the same time. Nearly everything about them is an obstacle to the way male characters are used to relating to women—as weak vessels and objects of either sexual attraction or disinterest.

Pitting such a woman against a man confident in his superiority produces a display of narrative fireworks that is often entertaining. Though their situation is perilous in this novel, the contest between Sister St. Agnes and Swanson is the equivalent of a title bout. And the twists and turns of their relationship are full of surprises.

Wrapping up. The early pages of the book are pretty savagely violent, and a reader with some sensitivity could be excused for cringing. It’s a brutal world these characters have been thrown into, a hell on earth. But Eidson blindsides you in later sections with heart-wrenching moments of pure sentiment.

The book won Spur Awards in 1994 for Best Western Novel and Best First Novel. In interviews, Eidson has said that it was written in airports and hotels, presumably on business trips. In 2003, when his novel The Last Ride (1995) was made into a movie, The Missing, Eidson was working as an executive vice president for Fidelity Investments in Boston.

St. Agnes’ Stand is currently available at amazon, Barnes&Noble, and AbeBooks and for kindle and the nook. For more of Friday’s Forgotten Books, click on over to Patti Abbott’s blog.
Tweet