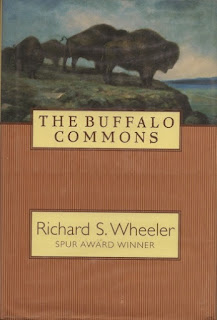 Written in the late 1990s, Richard Wheeler’s novel is set in what was then (and still is) the near future. A Ted Turner style billionaire, Laslo Horoney, has been buying up ranchland in Eastern Montana, Wyoming, and South Dakota to create a grassland wilderness preserve. He plans to stock it with bison and other species of wildlife for whom this vast region of prairie was once home.

Sounds like a great idea, except for a ranching family, the Nicholses, who decide not to sell out to him. Ranching is tough, but they don’t want to give up their livelihood or the property that has been the family home for generations. “Pain and struggle make the deepest, toughest roots of all,” Cameron Nichols tells Horoney. The novel is a long account of the conflict and eventual friendship that develop between them.

Plot.  That conflict is no simple one of black vs. white, or one man against another. It quickly mushrooms into a battle among forces that are way beyond the control of either of them.

An immediate complication is the illegal importing of wolves from Canada, which are set free on the Nichols ranch by an environmental activist. Designated an endangered species, they trigger the interest of the US Field and Wildlife Service, and the Nicholses soon find themselves embroiled in a host of government regulations. Failing to fully comply, they are at risk of having their ranch seized.

Meanwhile, Horoney discovers he’s up against nearly every interested federal agency eager to take possession of his grassland project for themselves. In league with them are the state authorities, who hope to milk him for millions in property taxes. Thus the use and misuse of power, at the expense of the individual, is a prevailing theme throughout the book.

The scope of this 380-page novel is as big as Montana. Besides the Nichols holdings in the southeast quadrant of the state, the geographical leaps take us back and forth along the I-90/94 corridor, from Miles City to Bozeman and north to Helena.  I also counted more than 35 characters who get themselves involved in one way or another, right up to the President of the United States.

Issues. Richard Wheeler is best known for his historical fiction. This novel is a departure, using a mode of speculative fiction to address a lot of current issues. But they’re issues that have a long history, particularly the rights of the individual vs. government. The villains in the novel are clearly those who do not respect those rights. Reading this book, a person can get a good idea of what animates voters for whom “big government” is a chief complaint.

Western fiction from 100 years ago often casts government and judicial systems as corrupted by moneyed monopolists. In Wheeler’s novel, government bureaucrats are in league with scientists providing research that supports policies biased by favored ideologies. The results are much the same.

Character. Among the handful of admirable characters in the novel is Sanford Kouric, a USFWS “wolf biologist.” He loses his job when he fails to give his full support to one of the agency’s rulings affecting the Nichols ranch. But like the others who refuse to knuckle under to the bureaucracy, he is not daunted.


By way of contrast is the university biologist, Dr. Brooke-Carson, who tries to co-opt Horoney’s scheme for a grassland reserve. Committed to a vision of restoring all of the Great Plains to a pristine wilderness condition, he subscribes religiously to a belief in the unsettled West as a kind of unspoiled Eden.

What’s wrong with this notion is that it’s part of a mythology that ignores eons of constant ecological change that preceded settlement. And it forgets that humans, known now as Native Americans, had already inhabited the West long before the arrival of whites. For Brooke-Carson, ranchers also represent agribusiness and corporate America, the arch-villains of the plains. Any device to throw the Nichols family off their land is fine with him, including the illegal dumping of wolves on their property.

The Nicholses, Horoney, and Kouric represent a kind of integrity that asserts values based on tolerance of conflict and the belief that a person can be surprised by truth. Getting to know each other in person, Cameron Nichols and Laslo Horoney discover that they are both decent men with more in common than there are differences between them.

For Cameron’s son Martin, the novel is a journey from unexamined assumptions about what's important to a discovery of his own self, a product of the plains. Embittered by the same kind of personal isolation that has turned his mother to drink, Martin learns that blaming others has led his life into a dead end. And he recovers his way by claiming responsibility for himself and forgiving those he feels have wronged him.

Themes. What is good? That question and the slow revelation of an answer make a thread that weaves throughout the story. The Nichols’ ranch manager, John Trouble, is one character puzzling over it. A Cheyenne Indian, he tries out some of the ancient tribal wisdom but decides that he is both American and Cheyenne and not ready to give up one set of values for the other. There is good to be found on both sides.

While Wheeler’s novel values a kind of individualism that respects others while remaining faithful to one’s own truth, it offers yet another answer to the question. The good is to be found in the finding of one’s home—not just for humans but animal and plant species as well.

The novel’s title, in fact, might well have been “Home on the Range.” It tackles the complex problem of accommodating the multitude of species that claim the arid western prairies as their home. A Montana resident, Wheeler admits to having his own biases, but his is not a sentimental or predictable treatment of his theme.

If the novel accomplishes anything, it makes a reader suspicious of land-use propaganda from any source. Nature exists independent of anyone’s ideas about it. As ecology has revealed the give and take of species that make up its fabric, it’s probably a good thing that no single species of thought should be able to dominate.

Wrapping up. Reviews of other novels by Richard Wheeler have been posted here previously for An Obituary for Major Reno, Snowbound, Masterson, Yancey’s Jackpot, The Dead Genius, and Collected Stories. The Buffalo Commons is currently available at amazon and Barnes&Noble.

For more of Friday's Forgotten books, click on over to Patti Abbott's blog.