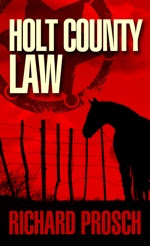 Today, they call Richard Prosch’s part of Nebraska the Outback. A tourist board thought that up, but it’s apt. In 1881, it was as far off the beaten track as it is today—a two-hour drive from the nearest interstate. Wikipedia kindly informs us that the county’s population in 1880 was 3,287. After peaking in 1920, it had shrunk in the last census to 10,435, or 4.3 folks per square mile. A good place to go stretch your legs.

I’m guessing you’d find some of the same people there today that you’d find in Prosch’s new western novella, Holt County Law, and his short story, “Branham’s Due.” Whit Branham is deputy sheriff in Holt County, where wearing a badge has its hazards. Even before chapter one of the novella, his young sheriff has been shot dead while playing cards in the saloon.

Deputy Branham is the kind of man you want as a lawman. At least, I always enjoy finding his type of character in a western story. He is a dedicated officer of the law and a dependable public servant, who knows everybody and most of what’s going on in his jurisdiction. Enforcing the law requires as much psychology and diplomacy as skill with firearms.

He’s even-tempered, intelligent, and a reliable judge of another man’s character, though while people may respect him, they aren’t necessarily friendly. So it can be a lonely job. He knows the few people in town he can truly trust. One of them is the hotelkeeper, Clara Byrnes.

The new sheriff in Holt County is an unknown quantity, having left town on unspecified business. So when a cowhand turns up dead on a nearby ranch, it falls to Branham to investigate. We know before he does that some truly nasty horse thieves are at work in the area, and his path soon crosses theirs. The rest of the novella is a chase across the prairie as he pursues them.

Prosch has a real gift as a storyteller, whether his Nebraska stories are set in frontier days or the present. (I recommend his collections of each, Devil’s Nest and Meadows Ford Blues.) He gets inside his characters, so you feel you really know them—and care about them. His West is also peopled with believable villains, elusive, calculating sociopaths who thrive in the wide-open spaces of the “outback.”

The stories are also told with a bracing economy. Characters and situations are sketched in with sharp focus, and action unfolds at a brisk pace. You often stop just to admire the precision of the writing. “Branham’s Due” and Holt County Law are currently available for the kindle.
Interview

Richard Prosch has generously agreed to spend some time here today talking about writing and the writing of Holt County Law. So I’m turning the rest of this page over to him.

Richard, we last talked here in April 2012. How have the last nine months been for you as a writer?
Since April, I finished a third juvenile book with magician Mac King, a juvenile western of my own, a handful of short stories, and a novella. During the holidays, I wrote two more stories and have a good start on the direct sequel to Holt County Law.

The biggest challenge was switching gears between juvenile and adult fiction. Also, some of HCL was written way back in 2011. I tried too hard to make those early scenes fit into the story when I came back to it last summer. In the end, most of it didn’t make the final cut.

How did the idea for Holt County Law suggest itself to you?
Holt County holds a special place for me. My most memorable high school football games were played in O’Neill (with St. Mary’s), and it’s the first place Gina and I stopped at after we left home as a married couple on our way to Wyoming. It’s home to some of Nebraska’s most exciting history and real life Old West outlaws. Holt County is also a kind of geographic way station where the rich soil of the east gives way to the sandhills in the west.

Was the published version similar to how you first conceived it or somewhat different?
A little different. There’s a great scene in the pilot episode of the TV series, NYPD Blue, where the main character, Andy Sipowicz, makes an obscene gesture to a female DA who he later falls in love with. Originally, I thought of Whit Branham that way, as a drunken ass who redeems himself and gets the girl. The more I wrote, the more it became clear that Whit wasn’t Sipowicz. No matter how much I wanted him to be a misogynistic jerk, he just wouldn’t cooperate.

Talk a bit about editing and revising. After completing a first draft, did it go through any key changes?
Yes, like I was saying, it was basically written in two sittings with the juvenile books in the middle. I won’t ever do that again. Coming back to it, I tried to keep the same voice I’d used earlier, and it didn’t work. Not only did the 2011 characters and story lose momentum, but the early writing was ponderous, fat, and out of focus. So most of the early stuff got trimmed away.

Were you thinking of any previous western writers while writing this one?
Not consciously, but I discovered Gordon D. Shirreffs during the summer of 2012, so some of his hard-edged prose might come through a little. And Peter Brandvold gave me permission to use sound effects, which I kind of like.

Was there anything about the story that surprised you in the writing of it?
Two things. Once I made the decision for a story grounded in Nebraska history, I was surprised by the freedom I was able to find. I was actually pretty worried about the constraints real life would put on my characters and action, but they didn’t materialize. So that felt good: to find that wiggle room with pretend characters and situations, while still maintaining historic plausibility.

The second surprise, again, was how Whit Branham wouldn’t accept his assigned role. Other characters more or less fell in line: Althea with her ego and sense of right, Ezrie as the tough old sidekick. But Whit had more integrity than I originally gave him credit for.


Can readers expect Holt County to become your Yoknapatawpha County?
I’ve always liked Faulkner well enough, but Gina can’t stand him—so maybe I should be careful! The answer is: yes, for a little while. The short story two-pack out this week at Amazon is set in the same Holt County universe, and the next novella will pick up where Holt County Law left off. On the other hand, I’ve got notes for a Badlands novella, a series of Old Cheyenne stories, and a John Coburn tale set in Missouri, so there’s some new geography in the queue.

What have been the most interesting reactions to the two stories?
I don’t write long scenic descriptions, so I’m always gratified when people recognize the landscape. I had two separate instances where people who grew up in north central Nebraska comment that the spare writing sort of echoed the barren landscape of the area. That kind of thing gives me goosebumps.

I enjoyed the appearance of Branham’s dog, Leonard. Any future plans for him?
I’m glad you asked about Leonard! He was based on the first dog I ever knew well, Boots Prosch. Boots (or “Bootie” as he was also known) was a swell character: a border collie who was funny, smart, and very forgiving of my boyhood nonsense. He died in 1972, but I was recently delighted to find him in an old home movie. I plan to digitize the film and post it to the blog or Facebook one of these days, maybe in conjunction with the sequel since Leonard plays a bigger role in that story.

Does Wayne Dundee know that he shows up in your story?
Wayne is an upstanding young fellar who tells me that one particular reference in Holt County Law gave him pause. After scouring not only the web, but the files of the Nebraska State Historical Society and the immigration records at Ellis Island, we found the rascal in question to be none other than Elijah “Windy” Dundee,  an accomplished Army scout, trail boss and sometimes hired gun, cousin to Wayne’s great-great uncle’s step-brother.

Thanks for clearing that up. For readers who like your work, which other writers would you recommend to them?
For every one I mention, I’ll forget three. I can’t say enough good things about the three men who write as Colby Jackson (James Reasoner, Bill Crider, and Mel Odom). David Edgerley Gates uses the language with remarkable precision and his bounty hunter stories are really enjoyable. Carol Buchanan infuses great history in her action (and vice-versa).

Matt Mayo has done himself proud with a couple top shelf Ralph Compton adventures. And of course, I already mentioned Peter Brandvold and Wayne Dundee. I also highly recommend Larry D. Sweazy's Josiah Wolfe stories. The names go on and on…

What are you reading now?
This is the year I go back and revisit a list of titles I first read in my teens and 20s. In 2013 I’ve read The Glass Key by Dashiell Hammett, The Power and the Glory by Graham Greene, and Foundation by Isaac Asimov. I’m off list this week with Henry Brown’s adventure novel Hell and Gone. Brett Cogburn’s Panhandle was the last western I read, and I got a big kick out of it.

What can readers expect from you next? 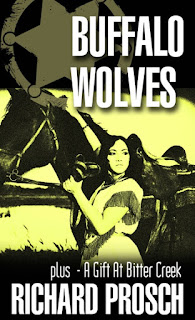 This week I have a short story two pack at Amazon: “Buffalo Wolves” serves up a heapin’ helping of trouble for two young characters from Holt County Law. A fun one because when I sat down to write it, I had no idea how it would end.  “A Gift at Bitter Creek” is a weird western Christmas story that pays tribute to the “windy” or western tall tale.  Later this year comes The Judas Book, the sequel to Holt County Law.

Anything we didn’t cover you’d like to comment on?
Only how much I appreciate everyone who reads my work, and that goes double for those folks who might take the time to write a comment or drop a review at Amazon. It means a whole bunch and I’m grateful.