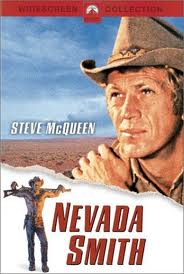 Steve McQueen starred in this rambling movie set mostly in the West. Its central character goes by different names until almost the end, when he calls himself “Nevada Smith.” The film was a prequel, based on a character in Harold Robbins’ 1961 potboiler, The Carpetbaggers. That novel had been made into a film in 1964, the character of Nevada Smith played by Alan Ladd  as a Tom Mix-style cowboy actor.

While it’s always a pleasure to watch McQueen on screen, this story was an odd fit for him. Already in his 30s, he is supposed to be a rank teenager in the opening scenes. More of a stretch is accepting him as a blond-haired “half-breed,” whose mother was a Kiowa Indian.

Plot. The story of the film has often been told in westerns. A man (or young woman, as in the case of True Grit) revenges the death of a family member. In this film, McQueen’s parents are tortured and killed by three outlaws (Arthur Kennedy, Karl Malden, Martin Landau). Then in 2+ hours of screen time, he tracks them down one by one to kill them.

First he has to learn how to use a gun and the many survival skills a man needs to stay alive in the West. A traveling gunsmith (Brian Keith) reluctantly but generously teaches him what he needs to know.

Believing himself ready to pursue his quest, he finally leaves Keith and begins looking for the three outlaws. He first finds Landau, who’s making a living as a gambler. After denying that he’s ever killed anyone, Landau tries to make an escape. In a knife fight, the two are wounded, Landau fatally, and McQueen is nursed back to health by the Kiowa.

Next he follows Kennedy into a state prison somewhere in the swamps of the Mississippi Delta. There he befriends the man and gets him to attempt an escape with the help of a prisoner from a nearby women’s prison camp (Suzanne Pleshette). Kennedy gets his due as McQueen shoots him dead with a revolver that he’s taken from a guard. Pleshette expires from snakebite.

Back in the West, arriving in the gold fields of California, McQueen gets a job with the last of the three villains, Karl Malden, who plans to hold up a shipment of bullion. In the middle of the robbery, as the other men ride off in every direction with the loot, McQueen turns his gun on Malden and leaves him to die, while Malden begs to be finished off.

Structure. The film uses the structure of a revenge plot to tell the story of a boy’s loss of innocence and growth into manhood. Unable to read and inexperienced at playing cards, drinking alcohol, and sex, McQueen’s young man gets some exposure to all these aspects of adulthood.

The screenplay also introduces him to religion when he is saved by a mission priest from being maliciously roughed up by some of Malden’s gang. The good father tries to persuade him to give up a life of violence. However, seeing a crucifix on the wall, McQueen observes that forgiving and forgetting didn’t work out so well for the man on the cross. He’ll stick with “an eye for an eye.”

Realism. McQueen does well with all this and is convincing in a role that demands a lot of him, while not giving him much more than a two-dimensional character. His “half-breed” parentage is used to make the villains more hateful, as they sneer at him and his mother. But his character is untouched by any ethnic or racial heritage. True to movie conventions of the time, white ancestry obliterates all traces of red.


It’s worth noting that women are worked into the story somewhat awkwardly. A Kiowa girl shows up in what seems to be a fairly comfortable saloon and whorehouse. While Indian girls may have found their way into prostitution in the Old West, the prejudice against “squaws” makes her an unlikely candidate for the profession.

The seemingly truthful representation of brutal prison conditions in the Deep South challenges probability when women prisoners get to fraternize with the men. Suzanne Pleshette is lovely as one of them, sweetly mannered, not the hardened product of a criminal life, as you would expect. Her slow demise from snakebite lacks anything like realism as well.

Wrapping up. The film seems very much a product of its time. Given its length, the size of the cast, and the sprawling narrative, it wants to be enjoyed as a historical saga, not just a western. Shot partly in the California Sierras and Owens Valley, it fills the big screen with sweeping outdoor scenery. Alfred Newman’s rich and persistent score echoes the scale of the mountainous landscapes.

Screenwriter John Michael Hayes (1919-2008) had an enormously successful career as a writer for radio and the movies. After a Jeff Chandler western, War Arrow (1953), he wrote scripts for Alfred Hitchcock, including Rear Window (1954). Among later projects, all of them adaptations of novels or plays, were Peyton Place (1957), Butterfield 8 (1960), The Children’s Hour (1961), and The Carpetbaggers (1964).

Nevada Smith is currently available at netflix and at amazon and Barnes&Noble. For more Overlooked Movies and TV, head on over to Todd Mason’s blog.
Tweet