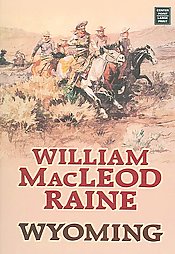 In this first novel by one of the western’s most published writers, mistaken identities bring together a schoolmarm from the East with a sheep man believed to be an outlaw. While menace endangers its central characters on the plains of Wyoming, love overtakes the hearts of not one but two young couples.

Plot. Helen Messiter comes West from Michigan as the new owner of the Lazy D cattle ranch. She makes a spectacular entrance, arriving in an automobile just as the Lazy D cowboys, guns blazing, have cornered a fugitive in the sagebrush. She decides to even the odds and drives at full speed between them to carry out a daring rescue.

After ducking bullets, she and the man trade bantering comments as they disappear together in a cloud of dust. She is full of high spirits, and he is playfully gallant. A later generation would call it a cute meet.

She learns, alas, that his name is Ned Bannister and has a reputation as a villainous outlaw, who has robbed banks and trains and killed men. Helen can’t square such heinous deeds with the well-mannered gentleman whose capture she has prevented. Puzzled, she shelves her initial attraction to him and goes about the business of running her ranch.

But the astute reader begins to gather that the real villain is yet another man, who also goes by the name of Ned Bannister. This “bad” Ned kidnaps Helen and takes her to his Robbers Roost. There she finds herself the prisoner of a man whose mercurial moods shift between gentlemanly refinement and vicious savageness.

Rescued and returned to the Lazy D, she learns that the two Neds are cousins. The “good” Ned has spent his life trying unsuccessfully to persuade “bad” Ned to mend his ways. The long unhappy history of the two cousins comes to an end as Bad Ned gets belligerent with one of his men, who draws on him and they kill each other. Good riddance.

But the excitement is not yet over. As Good Ned returns to the Lazy D, where Helen is supervising the autumn roundup, he finds her about to be trampled in a cattle stampede. In a reverse of the novel’s opening, he rescues her, lifting her onto his horse as he rides by. In the final pages, they declare their love and intention to marry.

Character. Both Ned Bannisters come from good Virginia stock, their grandfather a Confederate officer during the Civil War. But each grandson has inherited the temperament of his father, one self-disciplined and moral, the other a ne’er-do-well.

Bad Ned’s presence in Wyoming puts Good Ned’s character to the test. As he continues to cover up for his outlaw cousin, in hopes of reforming him, he allows people to believe that he’s guilty of Bad Ned’s crimes.

Villainy. A college education has not altered the dispositions of either cousin. Good Ned was a student athlete who gained both fame and physical dexterity on the football field. Bad Ned has developed a taste for the arts and can sing operatic arias in a way that stuns hearers into ecstasies. Like Good Ned, he’s also expert in rodeo events. He has the skill and the daring that make him a crowd-pleasing champion in the arena.

But, as Helen surmises, he’s an example of “good blood gone wrong.” Good Ned believes that his cousin was “handicapped” in his fight against the “depraved instincts and tastes” he inherited from his father. This genetic weakness in him prevented the building of good character.

Romance. For a novel about dealing with a menacing villain, it is dominated by scenes related to romance and its discontents. After that cute meet, obstacles in the path of true love multiply and keep the characters separated or continually at odds with each other.

The chief obstacle for a long while is Helen’s belief that Good Ned is really an outlaw, and the Puritan in her keeps her love for him unspoken. Instead, there are many scenes of playful and ironic bantering as she makes a pretense of being offended by his advances. Or she grows more bitter and angry as she willfully misunderstands him. The course of true romance is similarly rocky for Helen's foreman, Mac, and her housemaid, Nora.

The scenes between Helen and Bad Ned are a dark burlesque by comparison, as Bad Ned lays on the charm and she attempts to keep him at bay with withering wit. When he’s on his best behavior, she is surprised that she rather enjoys his company. Despite his  “colossal egotism,” she is touched by his Byronic despair.


Bonding between the males comes far more easily. At a Fourth of July rodeo, Good Ned and Helen’s foreman, Mac, become “soul brothers,” sealing a life-long friendship. Without words, Raine says, the two men acknowledge shared qualities of character simply with a look into each other’s eyes and a handshake.

Cowboys. The novel’s cast of characters includes a large number of cowboys. They are uniformly young, lithe, and spirited. Their talk rarely departs from mirthful repartee, raillery, sarcasm, and ribbing. They speak with a rustic drawl, and even the soberest subjects require a glancing display of self-effacing humor.

Illustrating the cowboy code of ethics, Raine shows how the men are steadfastly loyal to the brand and the boss. When one of them is over-helpful to the sheriff in making an arrest, he first gets the silent treatment from the others, and then cowboy justice is applied. He is held down while being given a chapping—a spanking with a pair of leather chaps.

Wrapping up. William MacLeod Raine (1871-1954) was born in London and emigrated with his family to the U.S. when he was ten, growing up on the Arkansas-Texas border. He was a college-educated man, graduating from Oberlin in Ohio in 1894. Thereafter, he traveled westward, working on ranches and as a journalist in Seattle and Denver before becoming a full-time writer of western fiction and nonfiction.

Raine was a hugely prolific writer, producing nearly 100 novels over a career that spanned more than four decades. FictionMags Index lists over 180 short fiction and serials published in the magazines from 1899 to 1951. During the Silent Era, 25 of his stories and novels were adapted to the screen. Wyoming was made into a feature-length film, The Man from Wyoming (1924), starring cowboy actdor Jack Hoxie.

Wyoming is currently available online at google books and Internet Archive and for kindle and the nook. Raine’s novel Brand Blotters (1911) was reviewed here a while ago. For more of Friday’s Forgotten Books, click on over to Patti Abbott’s blog.
Tweet