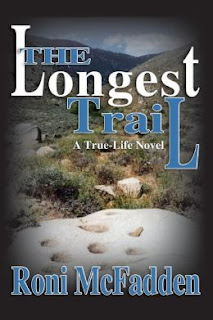 I didn’t think I was going to like this book, and then it kind of grew on me. It calls itself “a true life novel,” but it seems more precisely a memoir. Author McFadden tells of a few key years as a teenager in the 1960s. With a rocky home life and school days full of misery, she has only a love of horses to keep her from taking more dark turns than her life has already taken.

A friendly stable owner and horse trainer befriends her, and before long she is accompanying him as he packs groups of hunters into the Sierras in eastern California. Learning how to pack horses, set up camp, and cook for them, she acquires the self-confidence and independence to pass through a difficult adolescence.

We get to know some of the horses she is responsible for, each with his or her own personality and temperament. And we learn that hunters are rarely good at even finding game to shoot. Drinking and playing cards are more their idea of enjoying the woods, and she has little respect for them.

There is the occasional crisis as when four horses disappear into the night, frightened by something so terrifying that it takes days of searching to find them. Spending time alone at the base camp, three miles off the highway, she is faced with having to put down one of the horses with a broken leg. Another horse nearly dies of snakebite, but her swift thinking keeps the animal alive.

She herself becomes aware of the long history of former Native American inhabitants of the area and begins to feel that spirits of them are watching over her. She has both waking and sleeping dreams about them. The vividness of these dreams is the only suggestion of fictionalizing in the book.

This is not a tell-all memoir. Her relationship with John, her mentor, for all his importance to her, is not given much depth. A romance with an older boy is only implied. The many young friends who congregate off-season at the base camp are simply names, only one of them emerging from obscurity by reason of all the practical jokes played on him.

Readers interested in the life of high-altitude trail packers should also look for Willard Wyman’s High Country (reviewed here a while ago). The Longest Trail is currently available at amazon and Barnes&Noble and for kindle and the nook.
Tweet

Coming up: Gary J. Cook, A Murder of Wolves